BRIDGEWATER, N.J. -- Stadium demolition used to be simple: You'd rig the place with explosives, flick the switch and that was that. 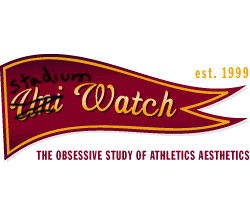 But now, thanks to the memorabilia market, stadiums have an afterlife. Case in point: Shea Stadium was demolished over the winter, with the final piece coming down several months ago. But out in a nondescript warehouse in New Jersey, some pieces of Shea still survive.

The warehouse belongs to the Meigray Group, a memorabilia company that's been storing and selling the last pieces of the stadium to collectors. It's a bizarre scene, somewhere between an estate sale and an organ bank, and you don't have to be a Mets fan to appreciate how surreal it is. You know that Sinatra song "There Used to Be a Ballpark Right Here"? Well, now it's here.

After the final game was played at Shea last September, the Meigray folks had exactly 15 days to strip the place bare before the wrecking ball arrived, and they took pretty much everything, whether it was nailed down or not (except for the seats, which the Mets sold themselves, and the plumbing and wiring, which was reused by the New York City Parks Department). The resulting haul: 41 truckloads of signs, lockers, banners, fixtures, outfield wall panels, vendors' stations, box-seat railings, even the dugouts, all of which was stored in this warehouse, then offered to the public.

The timing couldn't have been worse for Meigray, since the economy tanked almost exactly when it started marketing this material. But Meigray president Barry Meisel, who gave me a tour of the warehouse last week (see video at the top of this page), says sales have been good enough to cover the company's investment and then some, if not quite as brisk as he would have been before the stock market crashed. He estimates that he has sold about 75 percent of what was originally in the warehouse. 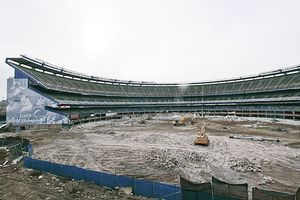 And what about the remaining 25 percent? Or to put it another way, which parts of the stadium have been the toughest to unload? Here are some highlights:

• Photo a go-go: There are boxes and boxes of framed and mounted photos that had adorned the stadium's executive offices. Many of them are way cool, although I think Meisel's going to have a hard time finding a taker for the George Bamberger shot.

• "Down the line, gone if it's fair … ": It might look like a water main or sewer pipe, but that's actually a length of one of Shea's foul poles. If that long piece is too big for you (or for your local zoning board), you can get a smaller section. Meisel says one collector took four two-foot sections and mounted them on a piece of the padded outfield wall to create a unique coffee table. (One small detail worth nothing: Check out how some of the pole sections are narrower than others. That's because each pole tapered as it went upward, which means a ball that nicked the pole just barely above the fence might be foul if it was hit higher up on the pole. Who knew?)

• Another brick in the wall: These bricks were used to build the stadium. See how they have all those little white flecks? That's because each brick -- along with everything else in the warehouse -- is tagged with one of those MLB authentication hologram decals. How'd you like to be the poor guy who had to do that? (Harder to see unless you squint and look really hard: the indentations from Mets fans beating their heads against the stadium wall after the team's various foibles over the years.)

• "Great seats, hey buddy?" There are hundreds of these elbow pipes with box seat numbers and vanity nameplates, all cut from the field level box railings. You'd think these would make nice keepsakes for season-ticket holders, so it's surprising how many of them are left. McQuade family, don't you want your nameplate? What about you, Mikelis family? There's something sad about this; all the other artifacts in the warehouse feel like leftovers, but these pieces feel more like orphans. 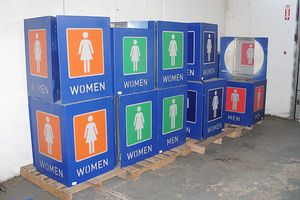 Paul Lukas Guests unclear where your bathroom is? Then we have the perfect gift for you.

• "Hot dawwgs, getcha hot dawwgs!" Ever dreamed of cooking a hot dog on one of those authentic stadium rolling-grill thingies? You're in luck! And look, you can get an official condiment dispenser, too. There's also a full battalion of beer stations, although Meisel says those are already spoken for.

• You can't tell the players without a scorecard: And you can't get a scorecard unless you've got ten bucks. Seems a little steep, but you can change the price to whatever you like if you take this vendor's stand home.

There's more: banners, on-deck circles, vinyl posters, concourse signage. There's also one very curious item stowed in a locker. Call me a pessimist, but I have a feeling Meisel's gonna end up being stuck with that one.

Over on the Uni Watch Blog, we recently had a good discussion about the configurations of outfield walls. For details, look here.

Meanwhile, over on the uniform front …

June is shaping up as the biggest month ever for the topic of advertising on uniforms. In a five-day span last week, the WNBA's Phoenix Mercury announced a jersey-sponsorship deal with LifeLock, fellow WNBAers the Los Angeles Sparks inked a similar deal with Farmers Insurance, and at least four NFL teams began exploring the possibility of wearing ad patches on their practice jerseys (the Packers, Bears, Broncos and Texans). In light of all this, Scoop Jackson and I faced off Wednesday in an e-mail debate on the pros and cons of uni ads. Check it out here.

Additional photos of the NFL's special AFL throwback uniforms, which we'll be seeing a lot of this fall, continue to trickle in. Uni Watch will provide full coverage of the throwbacks as the season draws closer, but for now the big news is that Greg Blanco has provided us with the first full-uni shot of the Broncos' infamous vertically striped throwback socks, which hearken back to the team's 1960-61 look. As Uni Watch has stated before, the garish socks are a novelty merchandising hit waiting to happen. Just imagine a cold day in Denver with a stadium full of Broncos fans wearing the striped socks on their hands as mittens (in high-def!). The only problem is that the NFL and Reebok haven't made them available for sale … yet.

Paul Lukas saved most of his Shea Stadium ticket stubs, which are enough memorabilia for him. His Uni Watch blog, which is updated daily, is here. Want to learn about his Uni Watch membership program, be added to his mailing list so you'll always know when a new column has been posted, or just ask him a question? Contact him here.