What to do about all these NFL jerks?

I still love pro football, but it's getting harder all the time. The problem isn't the game itself, which remains dramatic and compelling. The problem is with some of the people involved. And by "some of them," I mean, basically, all of them. They're all jerks.

The players are jerks. Many of the owners are jerks. And the coaches have become such massive control-freak jerks that it's hard to remember an NFL coach who wasn't a jerk. Plus there are so many jerk-ish strategies in vogue now, like calling a timeout just as the ball is snapped on a field goal attempt. To paraphrase George Costanza: Yo, NFL, the jerk store called, and they're running out of you.

Admit it: No matter how much you love pro football, you're nodding your head in agreement with me here. That's because there isn't a football fan in America who doesn't roll his eyes and think, "What a jerk!" at least a dozen times every Sunday. Here, then, are a few modest proposals to address this growing problem: 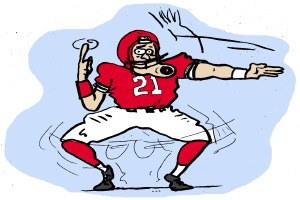 When it comes to NFL jerks, showboats are the low-hanging fruit. Dude, you didn't just win the Super Bowl; all you did was make a special-teams tackle. Singling out this type of behavior is almost too easy -- it's basically Jerk Studies 101 -- but still, it needs to be said: What a bunch of jerks.

The Solution: Before every game, each team will be allowed to name one player who'll be permitted to showboat -- the designated jerk. This player will be allowed to celebrate inappropriately, call undue attention to himself, and generally behave like a jerk. Any other player who behaves this way will be flagged for a personal foul -- not for taunting or unsportsmanlike conduct, but simply for being a jerk (the ref's hand signal for this infraction will be a crotch-grab motion).

At first, some players will be excited to be named the designated jerk; indeed, a few will no doubt lobby for the position. But the designation will lose its glamour as everyone realizes there's no joy in being the only jerk on the field. Soon teams will be going jerk-free, and civility, or something approaching it, will be restored. 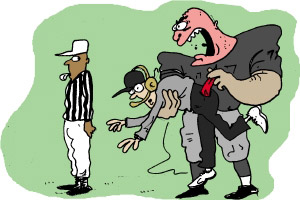 Nothing has done more to ratchet up the NFL's jerk-o-meter than the replay challenge. Whenever there's a vaguely questionable call, at least three separate jerk routines swing into action: (1) A player runs to the sideline and begins imploring the head coach, "They missed the call, throw the red flag!" These players are very consistent: They are almost always wrong. (2) The head coach starts getting all fidgety and uptight (or, rather, even more uptight than usual) because his assistant coaches upstairs can see the replays on their monitors but he can't, which sends him into a control-freak frenzy. And (3) While this is all going on, the other team scurries to the line to run a play, any play, before the coach can decide whether to challenge.

The Solution: Give the coach only 15 seconds after the end of a play to issue a challenge. No time to talk to the guys upstairs, no chance for the opposing team to block him by playing hurry-up. If the coach doesn't like the call as he sees it on the field, he can challenge it; if he's not sure or didn't have a good view, he'll have to live with it, and we can all move on.

Also: Quantum physics has conclusively determined that there's no way to toss a red challenge flag without looking like a jerk. Coaches can call timeouts without throwing something (besides a tantrum, I mean), so why can't they initiate a challenge just by shouting to the nearest official?

3. Only the Zebras Can Signal Who's Got the Ball

On the master list of life's great annoyances, the sight of every football player on the field giving the "We've got possession" signal during a scrum for a fumble clocks in at about No. 7. Do these players really think their hand signals influence the officials? Especially when half of them turn out to be wrong?

The Solution: Anyone who incorrectly signals that his team has possession is given a 5-yard penalty. And the infractions are cumulative -- if six guys on the same team do it, it's 30 yards. The penalty is doubled for anyone who signals from the sidelines, since nobody from that far away can see what happened anyway. 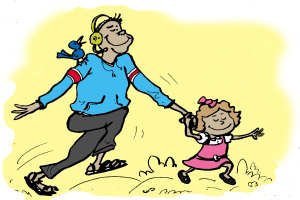 There's no more humorless, joyless demographic in all of America than NFL head coaches. All they do during a game is scowl, brood and bellow, and during the week they're all obsessive workaholics. The job has become such a study in megalomania that jerkitude has essentially become a prerequisite.

The Solution: Make head coaches take a day off during the week, and send chaperones along to make sure they do something fun, like play with their kids or go fishing (but not hunting -- no NFL coach should be allowed anywhere near a gun). Sure, game prep will suffer a bit, but every coach will have to abide by the same rule, so it'll all come out even on Sunday.

Of course, this won't be enough to give the NFL a complete jerk-ectomy. We still need to deal with the jerks who trash-talk in an opponent's face, the players who dress like jerks, and the players who give themselves a nom de jerque, among many others.

But hey, we have to start somewhere.

Paul Lukas is a Page 2 columnist. He is extremely fond of jerk chicken, beef jerky, and "Cool Jerk" by the Capitols.