We're back with another installment in our weeklong assessment of this year's World Cup soccer kits. On Monday, we covered the teams in Groups A and B. For Tuesday, our panel of soccer experts -- Doug Mulliken, Michael Orr, Kent Green and Patrick Runge -- is examining Groups C and D.

Doug: The home kit is a pretty boring white shirt, but the away is awesome. I love how the pinstripes have a hand-drawn look to them and how the shirt incorporates all of Algeria's colors. The best news is that all the Group C teams have white home shirts, which means we might see lots of change strips in these matches. Grade: B

Michael: Algeria's Puma kit was released this past fall and debuted in the African Cup of Nations in Angola. The right shoulder cut-out features a sublimated image of a fox -- a reference to the team's name, the Desert Foxes. Grade: B

Kent: Using a template sucks, and Puma shows why. The company came up with a nifty design concept, then ruined its distinctiveness by using it for every one of the company's African teams. That said, Algeria's home is fantastic, with a clean body look and the unique fennec detail. The bright greens and reds end up being too much on the away kit, though. Grade: B

Patrick: I hesitate to be too hard on a team that's using the colors of its national flag, but boy it's tough to work with lime green, red and white. The away kit is sharp and does a lot more with the shoulder knockout than the home kit. The press release said the striping on the away shirt is supposed to resemble the face paint fans use when supporting the team, although I'm not sure that's the best place to look for design inspiration. Grade: C+

Doug: As usual, England released its home kit two years ago, whereas the away kit -- inspired by its 1966 World Cup victory -- was unveiled only recently. They're both really good-looking uniforms with clean, classic designs. Regardless of how it looks, the England design is always the best-selling soccer shirt in the world, so it's nice that the English have come up with a good one because we'll be seeing a lot of it. A

Michael: The all-white kit is the hallmark outfit for Nike's Umbro division, and the change kit is the centerpiece of Umbro's new "Made by Umbro in England" campaign, which is already beginning to dot club teams around the world. For me, as clean as the white look is, the red kits are even better. A-

Kent: When is a jersey classic, and when is it boring? England skirts that line with its home and away. What saves these designs from dullness is the crest -- gotta love those three lions. A-

Patrick: England's kits are always better when they keep it simple and let history talk. The more it tries to mess with things, the worse it gets. Happily, this year's design keeps it clean and classy. A

Doug: I really like this kit, home and away. Slovenia wore a similar design in 2002, so if you don't like this design, you can't blame Nike. I like how the zigzag evokes the Slovenian flag. And for all you soccer fans in Green Bay, the away kit is a Packers fan's dream come true. B+

Michael: Who knew Charlie Brown was such a big soccer fan? Even more surprising, the color designations have been swapped -- the white design, which is usually Slovenia's change kit, will be the primary kit during the Cup. That's just as well because the green design is even more cartoonish. All very odd, especially considering how plain most of the Nike kits are for this tournament. C

Kent: Some might call this the Charlie Brown look -- philistines. The mountain silhouette shouts out to the country's flag and boldly breaks the Nike template. The away is even better, with a retro effect created by the green-on-green scheme. B+

Patrick: The Slovenians are devilishly clever using the Charlie Brown effect to lull their opponents into not taking them seriously. Seriously, that's the only possible explanation for this design. No one could have looked at these kits and thought, "Yeah, that's a sharp look." The worst look in the tournament. Whatever's lower than F 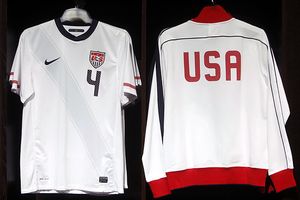 Doug: In so many ways, the U.S. is England's little brother when it comes to soccer. The Yanks play like the Brits and dress like them, only with less class. The away kit is better than the ridiculous home kit (at least the sash is visible against the blue), but these are both a major step backward from 2006. Also, the clip-art badge is a joke. When will the USSF actually design a quality badge? D+

Michael: The Americans are hoping that changing their sash from the vertical 2006 design to the diagonal 1950 vintage will bring better luck in this World Cup, although the sash on the white kit is extremely subtle. The sash is much more prominent -- annoyingly so -- on the change kit, so hopefully the Americans will get to wear white as often as possible. B-

Kent: I want to love the USA kit, but the whole point of a sash is to be bold. So why did Nike hide it on the home shirt? The contrasting sash on the change works much better. What irks me is that this was already done much better on 2006's "Don't Tread On Me" shirt. Red is more exciting, and the two-color stripe really pops without being distracting. This year's version is a step backward. B-

Patrick: I'm torn by the American kit. The sash has a disturbing resemblance to a beauty pageant award. That said, I know the home kit's sublimated sash makes the shirt look as if there's something missing in the middle. But I love the throwback to the 1950 kit (the last time America beat England), and I like how the sash tends to draw attention to the very effective name/number typeface. OK, I'm not torn anymore -- I really like these. A

Doug: Australia has had some good, clean shirt designs in the past, and this home shirt is one of the best. The away kit, however, is terrible. It reminds of the Seahawks with their not-quite-blue unitard. I hope the Socceroos don't wear it during the tournament. B+

Michael: Strange set. The color combinations aren't bad -- green and gold are Australia's official national colors but blue and gold are the country's ancient heraldic colors, which explains the difference between the home and away color schemes -- but the execution doesn't work for me. C

Kent: These look suspiciously like traditional rugby shirts, which would be appropriate given the Aussies' love for that sport. I like the home more, as the bright white bar really draws you in. The away design does nothing to excite or disappoint. C+

Patrick: The central design theme here is the large bar running across the front of the shirt. The placement of the bar messes up the location of the team badge and messes up the entire balance of the whole kit. (I keep looking for a sign on the shirt reading, "You must be this tall to tackle this player.") D 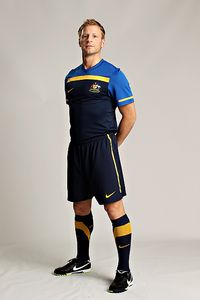 Doug: These don't do much for me. Moreover, I strongly believe Germany should revert back to green for its away kit. The reason it wore green in the first place is a perfect example of the poetry of the game: Germany's first international match after World War II was against Ireland, so until 2002 it wore green as a gesture of thanks for being accepted back into the international sporting world. It's a shame it's not worn anymore. B-

Michael: The white home kit is top-quality work from adidas -- simple and classy. The black change kit isn't quite as good but is infinitely better than the red and black abomination of a change kit from 2006 (which, thankfully, was never actually worn on the field). A

Kent: German-based adidas might be showing some hometown bias, as these kits are both excellent. Black shirts can be gratuitous, but not here. The away is one of the sharpest in the tournament, and the dark background really accentuates the black and gold trim. A-

Patrick: The German home kit is pretty darn near perfect. It's clean, evokes the history of the team and incorporates the national colors beautifully. The black away kit is a little more problematic; when I first saw it, I wondered why the Germans were wearing Liverpool's 2009-10 change kit, which I suspect is not what they were aiming for. A-

Doug: Usually I'm a big fan of all-white -- the cleanest, most distinctive look in the sport. But the Ghana kit is almost too clean. Love the away kit, though. Considering Ghana and Cameroon share the same colors, I like how Ghana focuses on the red and yellow, leaving the green for the Francophones. I really hope Ghana wears this against Germany. B+

Michael: Like all of the African teams, the Black Stars debuted their kit in the African Cup of Nations. The home whites are pretty sharp and feature their famous black star on the right shoulder. The change kit has much more yellow than they wore in 2006, which isn't a bad way to go. Overall, pretty solid. B+

Kent: The white-on-white home is clean but doesn't impress. I would like to see some more accent coloring. Meanwhile, the colors on the away are too garish, and the white numbers in the shoulder knockout look ridiculous. C+

Patrick: Another shoulder knockout design, but I prefer this one to Algeria's. The away kit is, well, attention-getting but not quite as tough on the retinas as the Desert Foxes' kit. B-

Doug: Everything about the home kit is perfect -- the offset cross, the beautiful badge (look, USA, it can be done!), the blue sleeve trim that complements the blue shorts. Just wonderful. The away kit reminds me of early-2000s MLS, when every team wore white away. Perfection. A+

Michael: This is the first time the Serbs will be playing in the World Cup as a sovereign nation, and they've marked the occasion by showing off their independent football association's crest on their striking red home kit. The white change kit might be the simplest of all possible uniforms, which in an age of overdesign is not a bad thing. A

Kent: Serbia's home is one of the nicest-looking jerseys in the Cup -- elegant, distinctive and highlighting the country's insignia. The change's basic look serves the whole package well, given that a color flip would have made the home less exciting. Bravo. A

Patrick: The Serbs got this one right, with the offset white cross blending in with the striking red shirt. The away kit is a perfect less-is-more white, completing a really good set. A-

For his next trick, Paul Lukas will get four readers to whitewash his fence. If you liked this column, you'll probably like his Uni Watch Blog, plus you can follow him on Twitter and Facebook. Want to learn about his Uni Watch Membership Program, be added to his mailing list so you'll always know when a new column has been posted or just ask him a question? Contact him here.