It's all soccer all the time this week at Uni Watch HQ, as we continue our team-by-team rundown of the uniforms for the upcoming World Cup tourney. By now you know the drill: Your friendly uniform columnist is ill-equipped to discuss soccer, so the commentary will come from Uni Watch readers Doug Mulliken, Michael Orr, Kent Green and Patrick Runge. They covered the teams in Groups A and B on Monday, and Groups C and D on Tuesday. On the docket for today: Groups E and F.

Doug: I've always liked Cameroon's uniforms. As long as the Indomitable Lions stick with the green/red/yellow ensemble, they look great. If they throw in green shorts, I don't like their look nearly as much. That said, the away kit is way better than the home kit, just as it is with all the other Puma designs. Love the yellow shirt with red pinstripes. All in all, very nice. Grade: A

Michael: Cameroon has had some of history's most outrageous kits from sleeveless to one-piece. This year's versions are much tamer -- very solid, especially compared to some of their previous indulgences. Grade: B+

Kent: I have a major beef with Cameroon's home shirt: The dual crests have forced the ghosted lion too far over on the shoulder knockout, which makes for a dull top (although the red shorts provide some much-needed flair). On the away uniforms, I like the shirt's thinner stripes, but that's about it. This is a difficult color scheme to pull off. Grade: B-

Patrick: Historically speaking, nobody has ever had trouble locating Cameroon on the pitch. But his year's home design tones down the red a little, making the kit a bit less bold. A very good look. Grade: B+

Doug: Denmark has always had decent-looking kits. This year's home edition is somewhat inspired by the "Danish Dynamite" days of the 1980s, but the away shirt is such a bore. I suppose there's not much you can do when you've only got two colors to work with, but the shirt would have looked better if they'd simply reversed the home design. B+

Michael: The Danes, who have traditionally worn kits by Danish company Hummel, have switched in recent years to adidas. Their two kits are both standard adidas templates. The red version has an interesting take on 11 players in motion, but the white change kit is pretty much just a template and crest -- boring. C+

Kent: Nothing is rotten on Denmark's home shirt. It does a great job of taking a simple look and spicing it up with a chest design that's new and a throwback at the same time. Superfluous shoulder stripes add a distraction on the otherwise-clean away. B+

Patrick: Leave it to the Danes to turn their World Cup kit into performance art. I actually like the "eleven" design, and at least they didn't try to overcomplicate the home shirt with any other markups. Too bad they didn't use the same concept for the away shirt. B

Doug: Japan's home kit is the worst example of the adidas TechWeb sports bra look that is plaguing the brand's kits this year. I actually like the feather pattern -- reminds me of the sweet 1998 shirt. Other than that, though, there isn't much to get excited about here. C+

Michael: Strong set. I could live without the feathery under-pattern but it's hard to see anyway, so it's no big deal either way. Both kits feature fantastic the Japanese flag on the socks, which is a nice touch -- the flag design really pops on the blue home socks. B+

Kent: When the best thing about your uniform is the socks, you're in trouble. From the overly busy home design to the TechWeb bra, this is a klunker. C+ Patrick: Well, let's get it out of the way: The socks are awesome. Unfortunately, it's downhill from there. The feather detailing is an interesting idea but is so understated as to be invisible. The shoulder yoke look just reminds me of how adidias messed up the Argentina kit, and I really don't get the red block under the neck, which looks like a bib. B

Doug: The Dutch haven't had this much black in their kit since 2002, when they didn't even qualify for the Cup. Too bad they didn't stick with the design they wore at Euro '08, which was one of the better kits in recent memory. I like the away shirt, but it too is a step down from 2008. B

Michael: The orange home kit is simple enough, but the change kit is where the Dutch really stand out. The shirt's multi-colored chevron is mirrored on the socks and gives the white shirts enough color to avoid the "Boring!" tag given to several of Nike's latest creations. A-

Kent: I loved the 2006 home kit, with its white contrasts and national flag detail on the collar. By contrast, the black trim on the 2010 home feels too heavy. I wasn't originally a fan of the away kit, but then I noticed how the socks echo the chest chevron. Nice. B

Patrick: While I would prefer the orange home shirt to be trimmed with more white than black, it's easily the most recognizable and exciting kits in world soccer. And I love, love, love the away kit, especially the crowning touch of the chevron accents on the socks. One of the best looks in the tournament. A 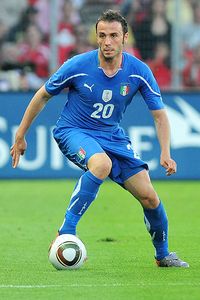 Doug: The Italians have tried to be "innovative" in recent years. In 2000, it was the skin-tight Kappa creation; in 2004, the built-in double collar. And now we have this utter disaster. I'm not sure what that's supposed to be on the home shirt, but I see a tiki mug. F

Michael: The traditional savoy blue home color is nice, but that sublimated pattern is truly bizarre. The white change kit is far too plain and a victim of Puma templating. C

Kent: Italy is supposedly one of the centers high fashion, so what the hell is Puma doing to the Azzurri? The home shirt is a disaster, featuring what appears to be a cyborg's six pack. The away is nondescript, and then there's the hideous keeper shirt. If goalie Gianluigi Buffon looks down at his chest, he'll be too nauseous to stop anything. D-

Patrick: Yeah, the pattern on the home shirt is a little weird, but I really like the star-cut collar with the green and red accenting, and the white sleeve striping provides additional interest. It's the away shirt that concerns me. Raise your hand if you think the gold design underneath the arms looks a little too much like an unfortunate pit stain. On second thought, perhaps you shouldn't raise your hand after all. B

Doug: The white home and black away kits look really good -- perfect examples of how less can be more (the All Blacks rugby team, with their gray away shirt from the 2007 Rugby World Cup, could learn something from their roundball brethren). New Zealand may be one of the lowest-ranked teams ever to make a World Cup, but at least they'll look good finishing in last place. B

Michael: Simplest kits in the Cup. I know some people think "simple" is the same as "yawn-inducing," but not this time -- there's an elemental elegance to this set. A-

Kent: The name "All Whites" doesn't exactly open the door to design creativity, but New Zealand didn't even knock. Both kits lack character, and it would've been nice if they'd gone for a fern watermark like the one used by the All Blacks rugby team. C

Patrick: New Zealand is only in the Cup because Australia left the Oceania federation, leaving the Kiwis to compete with the likes of Tahiti, New Caledonia and Vanuatu. It appears they've mailed in their kit design, just like they mailed in their qualification requirements. Bo-ring! D 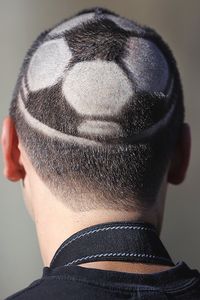 Juan Mabromata/AFP/Getty ImagesThese haircuts would make a nice accessory to the Paraguay unis.

Doug: I've always loved Paraguay's red and white stripes, especially when paired with royal blue shorts. On this particular shirt, I think putting the lion and the Guaraní words on the back collar is a nice touch (the lion is based on the country's coat of arms). I like the white away, too. A-

Michael: The vertical stripes are nice enough, despite the adidas templating. The white change kit uses the same adidas template as Greece, but the red piping and blue adidas stripes look much more complete. B

Kent: I don't get any of this. Paraguay's whole ensemble seems like a lot of half-thought-out ideas thrown together. The home is as close as I'll ever get to liking a vertically striped shirt, but then things are ruined on the front by the red shoulder patches and the solid-red back design. Love the lion on the back collar, but that's not enough. For the away, Paraguay just got Greece's leftovers. D+

Patrick: Paraguy's home shirt is one of the sharpest in the competition. I love the stripes, and the additional touches such as the lion on the back collar help really make this a nice look. The blue shorts echo the colors from the badge, but it does make things look a bit busy, particularly when you add in the striped socks. The away kit is standard adidas template, which I loathe. Disappointing to see a team go from a sharp home design to such a dud away kit. B

Doug: There's plain, and then there's really plain. The good thing about this kit is frugal Slovakian fans can just buy a generic blue or white adidas shirt from Sports Authority, sew a Slovakia patch on the chest, and presto -- a Slovakia shirt at a budget price! C+

Michael: The Slovaks are reversing their usual colors by putting a white kit as home and their usual blues as the change. The blue shirt appears to be using the same adidas template as Japan, but to much less distinctive effect. Well, this is the first World Cup for Slovakia as an independent nation, so it's entitled to some beginners' mistake. C

Kent: Take a closer look at that blue change shirt: There's an underlying pattern that mimics the hyperspace travel effect. Slovakia thus pulls off a neat trick: boring from afar, chaotic and cluttered up close, like a bad pointillist painting. The white home outfits are bad in a more conventional way: They're just boring. C-

Patrick: Another victim of template-itis. I do kind of like the idea that they'll go white at home, because it will likely force many of their opponents to wear their change kits, which will make things more interesting. C

And that's it, right? Wrong -- we still have to cover the eight teams in Groups G and H. We'll get to those tomorrow.

Paul Lukas is glad to see he's not the only one who can geeked out over a sock design. If you liked this column, you'll probably like his Uni Watch Blog, plus you can follow him on Twitter and Facebook. Want to learn about his Uni Watch Membership Program, be added to his mailing list so you'll always know when a new column has been posted, or just ask him a question? Contact him here.