Baseball caps are just about everywhere

Uni Watch reader Eric Trager was traveling in Cairo last week when he spotted something interesting: a vendor's stall featuring a rack of knockoff baseball caps.

Trager took those photos just a few days after the Pope -- the Pope! -- was spotted wearing a baseball cap during an afternoon walk. (And it wasn't even a fitted cap -- the pontiff was wearing an adjusta-strap model.)

These became the latest additions to my file of unusual baseball cap appearances, many of which have come from parts of the world where people wouldn't recognize a baseball game if you plopped one down in front of them. Case in point: Hamas supporters celebrated a political victory a few years ago by parading through the West Bank and Gaza in Hamas baseball caps. Who knew Hamas had its own baseball cap?

Even stranger: Up until 1988, a Colombian tribe of nomadic people called the Nukak had never had any contact with the developed world, but by 2003 some of them were wearing baseball caps. (You can decide for yourself whether this counts as progress.)

Face it, when it comes to invasive species, the zebra mussel and Asian carp have nothing on the baseball cap, which has seemingly wormed its way into every corner of the globe. I'm hardly the first writer to notice that (my Page 2 colleague Jim Caple made that same point four years ago), but when the Pope goes all casual-Friday on us, it's worth considering just how ubiquitous the ball cap has become. To put things in perspective, let's take a quick inventory of all the places that now constitute the baseball cap's natural habitat, beginning with sports other than baseball. Ready? Here goes:

And so on. You know how David Letterman's production company is called Worldwide Pants? The baseball cap has essentially become the Worldwide Hat. 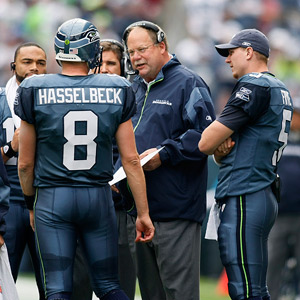 AP Photo/John FroschauerIf you remove your helmet on an NFL sideline, the rule is you have to put on a baseball cap.

I haven't yet been able to document exactly how the ball cap spread around the globe (although it surely has something to do with the worldwide spread of baseball and the pervasive spread of American culture in general). I do know, however, how it became the all-purpose headwear choice here in America, a sartorial version of Manifest Destiny that was fueled by three key developments:

1. The decline of the fedora. The standard folk myth is that fedora use went into a tailspin when Jack Kennedy chose not to wear a top hat at his 1961 inauguration. That's patently false, and it obscures a larger truth: Fedora use had already been in steep decline throughout the 1950s. In fact, the hat lobby -- yes, there really was such a thing as the hat lobby -- had practically begged Kennedy to wear a hat to his inauguration, because they'd already seen the writing on the wall. (In the unlikely event you want to know more about this, check out this book.)

In any case, the key thing to remember here is that decline of the fedora, whether JFK-associated or not, created a headwear vacuum that left American heads up for grabs. That coincided with another 1950s development …

2. The advent of Little League baseball. Before Little League, American kids typically wore hats like these. But Little League provided kids of the 1950s and '60s with early access to baseball caps, and many of them began imitating their baseball heroes by wearing their Little League caps off the field. By the time these kids became adults in the 1970s and '80s, baseball caps were often the only kind of headwear they'd ever known (well, aside from cold-weather ski caps). With the fedora a cultural relic by that point, they just kept wearing baseball caps as adults. And that's when the third major development occurred …

3. The rise of MLB merchandising. It's hard to imagine this now, but up until 1980 or so it was very difficult to buy, say, a Yankees cap. The folks at Major League Baseball simply hadn't figured out yet that people would gladly fork over $35 for such an item. As merchandising spread, so did the ball cap.

As the baseball cap's profile rose at retail and on the street, it began to supplant other forms of specialized headwear. When celebrity chef Wolfgang Puck opened his first restaurant, Spago, he and his kitchen staff eschewed the traditional chef's toque and instead wore baseball caps, to symbolize their rejection of rigid, formal cooking styles. Even authority figures like policemen, train conductors and ushers, who'd previously worn formal hats to signify their status and clout, began trading in those hats for baseball caps. Soon the ball cap had become the default option for virtually any situation that called for a hat.

But there's one place where the baseball cap may have outlived its usefulness. And that place, ironically enough, is the baseball field.

Think about it: Most ballgames are now played at night, so there's no need to wear a cap with a brim. And the team's insignia already appears on the jersey, so the cap isn't needed as a team identifier. Even if you think the players on the field ought to wear a cap, there's no reason players in the dugout or bullpen should be required to wear them -- and yet they are.

Imagine if caps for ballplayers were made optional, or eliminated altogether. I'm not advocating that, mind you -- it would represent a quantum shift in the sport's look. But it would also nicely summarize the cap's full-circle transition from athletic wear to all-purpose non-athletic accessory, even suitable for a papal stroll.

Paul Lukas currently owns about eight baseball caps. If you liked this column, you'll probably like his Uni Watch Blog, plus you can follow him on Twitter and Facebook. Want to learn about his Uni Watch Membership Program, be added to his mailing list so you'll always know when a new column has been posted, or just ask him a question? Contact him here.