Taking the art of cornhole to a new level

Cornhole -- you know about it, you've probably played it. It's the game where you toss the beanbags at the plywood target with the hole. The game played by countless drunken college kids. The game where it's almost a law that you have to wear a backward baseball cap. The game whose name makes your inner Beavis snicker.

Unless you're Robert Marshall or one of his friends. In that case, cornhole is a combination of art project, prop theater and take-no-prisoners competition.

Marshall, an artist who lives in Chicago, has been convening cornhole tournaments in his neighbor's backyard for the past few years. He's a man who likes to push things to their extremes and then push a little harder. Consider, for example, his cornhole attire: Asked about the solid-white outfit, Marshall says, "It's about respect for the game, like at Wimbledon."

Of course. And the Mexican wrestling mask? "No real reason, other than to intimidate."

Check. But are there really any commonalities between cornhole and wrestling? "Except for the eye-gouging, definitely. It's all about the big score, jumping off the ropes, the whole thing. Actually, we might have some eye-gouging today too."

Welcome to cornhole, Marshall-style. And the outfit is just the beginning. Marshall sews his own beanbags; makes his own targets, scoreboard, and trophies; and even designs his own trading cards. He's also established a cornhole code of conduct that stops just short of being its own religion. Its major tenets are as follows:

1. The "bags" thing. The word "bags" assumes near-metaphysical status in the Marshallverse. The game is never called cornhole -- always bags. His neighbor's backyard is Bags Stadium. And Marshall and his pals have come up with their own bags-centric lexicon. Here's a sampling:

• Beast with two bags: when one bag lands upon another.

• Flat bags: holding the bag flat on the palm before the toss.

• Dust bags: a round when nobody scores.

• Little bag horn: when a top-seeded team gets ambushed by a supposedly lesser squad.

• Baby got bags: when a female player is on a high-scoring roll (although Marshall notes that the term has sometimes been invoked "in other circumstances"). 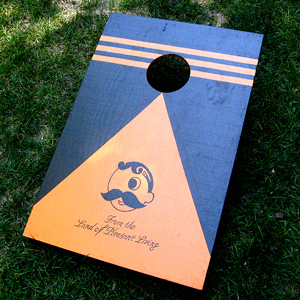 Paul LukasOnly in this league does a piece of plywood have personality.

And those are just the terms relating to the game itself. Hang out with Marshall's crew long enough and you'll start to hear the English language being infected by the bags bug. Reminiscences about past events often begin with, "I remember bag in the day ... " Any discussion of music inevitably includes a reference to the Bagstreet Boys or "Bag Moon Rising." Someone who's annoyed with you might tell you to "Bag off!"

Marshall himself used to go by Long Tall Bag of Water, but now he's Natty Bagger. That's a reference to Natty Boh, which is short for National Bohemian, a popular beer in Baltimore. All of which leads us to ...

2. The Baltimore thing. Although he lives in Chicago, Marshall hails from Baltimore. The slogan and logo character on his cornhole bags targets are borrowed from Natty Boh, and the black-and-orange color scheme is a shout-out to the Orioles. Those same colors show up throughout Marshall's homemade accessories: His beanbags are black and orange, scoring is charted with black and orange clothespins, and so on.

3. The corn thing. Visitors to Bags Stadium quickly notice a maize-based visual theme, from the championship trophies to some of the other props. It's a long story, but let's just say Marshall is really, really into corn. This might be awkward if the operative vegetable were, say, broccoli, but all the corn references dovetail with the game's official, if unspoken, name. So it all fits in nicely.

I like it when things get repurposed in unusual directions, so the idea of a frat-boy game being hijacked by a bunch of art geeks pushes my buttons. Plus I think it would make a good story for Page 2. Would Marshall be cool with a bit of media coverage?

A few weeks later, I arrive in Chicago, head over to Bags Stadium, and find Marshall setting up his latest accessory: a cartoon illustration with lots of painted feathers clipped to it. But as I take a closer look, I see that they aren't feathers after all -- they're painted corn husks.

"I was up until 4 in the morning making them," Marshall proudly tells me. "They're based on jockey silks, like in horse racing. Silks made out of silk, get it?"

"Um, but those are husks, not silks."

Marshall then explains that each two-person team will pick its own silk design. Each team's design will start out clipped to the left side of the illustration board -- the happy side, the winners' side, the side symbolizing the quest for corn. Then, whenever a team is eliminated, the team that defeated it gets to move the vanquished team's silk to the opposite side of the board -- the sad side, the losers' side, the "No more bags for you!" side.

As Marshall spells all this out for me, I try to imagine all the people in America who are playing cornhole at that very moment -- college students, tailgaters, partygoers. How many of them, I wonder, are charting their progress via festively patterned corn husks and cartoon paintings? It doesn't take long to calculate the answer.

Over the next hour or so, players start drifting in and beginning their pregame preparations. This mostly seems to consist of a few practice tosses and a few beers, not necessarily in that order. There's a bit of a stir as Bagarazzi and his girlfriend, Dagger Bagger, arrive. They won the previous tournament, held on the Fourth of July. 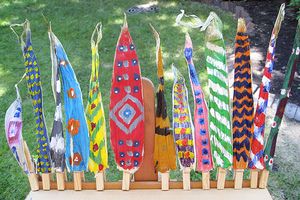 Paul LukasWhen you paint corn stalks until 4 a.m. you are officially obsessed.

"I want to continue our streak," Bagarazzi tells me, "so over the past few days I've been visualizing victory. But I forgot to visualize this morning."

"What were you visualizing instead?"

"I was visualizing toast and coffee."

As I wait my turn to take some practice throws, it occurs to me that one of the best things about this game is the audio component -- a constant drumbeat of thwack, thurmp and shplat as bags land on the target. The sounds are completely inelegant yet somehow entertaining, sort of like a burp or a fart, and I suddenly realize this probably explains the game's frat-house popularity as much as anything.

Meanwhile, Marshall wants to know what I'll be calling myself. I'd already given this some thought and have decided to go with Brown Bagger, to symbolize my old-school/lunch-pail bags style. The truth, though, is that I don't have a bags style. In fact, I've played only once before (the game wasn't yet popular when I went to college in the mid-1980s). But I decide not to mention that to anyone.

The next order of business: Since I haven't brought along a teammate, I need to have one assigned to me. So Marshall pairs me with a local gal named Holly, although here at Bags Stadium she's known as Count Bagula.

I go introduce myself to the Count. She shakes my hand and immediately tells me, "I'm, like, not that good."

No matter. We pick out a silk design for ourselves and prepare to toss some bags.

On paper, the Count and I make a formidable duo. In practice, we kinda suck. I'd forgotten that it isn't enough simply to shplat the bags onto the target, because they frequently skid out of play after shplat-ing, so you have to toss with just the right arc. I'd also forgotten that my hand-eye coordination somehow doesn't improve after that fourth beer after all. Despite some nifty shooting by the Count, we end up losing our first game by a lopsided score.

We have a bit of time before our next game, so I take the opportunity to shoot a bit of video. Here's a small cross-section of the sights and sounds at Bags Stadium:

After I put my camcorder away, the Count and I retreat under a shady tree for what you might call a strategy session. You might also call it "a few more beers." Either way, I feel a renewed sense of confidence as we prepare to match up against Bare Bagger and Carpetbagger.

We're a lot better this time, with both of us nailing shot after shot. Unfortunately, our opponents are even better. We lose by one point, eliminating us from the tournament. I watch helplessly as Bare Bagger moves our silk design to the sad side of the board.

As other teams are eliminated, it becomes evident that the championship will come down to Bagarazzi and Dagger Bagger against Marshall and his girlfriend, who calls herself Rolling Thunder (apparently you don't have to have "bag" in your name if you're dating the league commissioner).

Marshall's eyeglasses have been fogging up inside his wrestling mask, so he decides to wear them on the outside. This definitely cuts down on the intimidation factor (he now looks like Woody Allen in "Sleeper"), but his game is still sharp, as is Rolling Thunder's. A few well-placed thurmps and shplats later, their silk design is all alone on the happy side of the board, signifying their triumph.

While the assembled masses applaud, Natty Bagger and Rolling Thunder enjoy the sweet taste of victory -- literally. That's right, the winners at Bags Stadium get to eat the trophy. Just try that with the Lombardi Trophy or Stanley Cup!

As the champions munch away, I notice something I'd previously overlooked: The pattern on Marshall's necktie looks like bags hitting targets. A perfect little detail to cap off the day. Bagtastic indeed.

(Special thanks to Steven "Bagarazzi" Pate, who took many of the photos linked from this story.)

Paul Lukas, a Page 2 columnist, is determined to improve his bags game before his next visit to Chicago.