The hole truth on the NBA jerseys 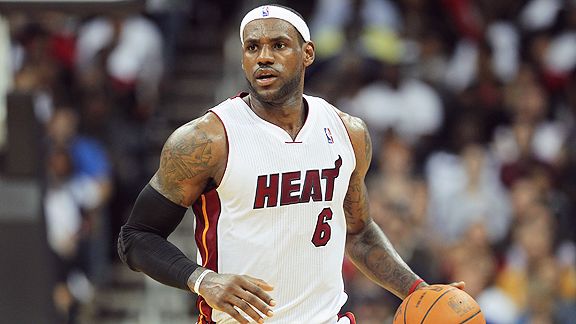 As you've probably heard by now, all NBA teams will be wearing a new uniform system, called the Revolution 30, this season. A media unveiling in September made all the usual claims about the new uniforms being lighter, faster-drying and so on, but it didn't offer much solid information to address the two big questions that are probably going through fans' minds right now: "Will my favorite team look different this season?" and "Does this mean the authentic jersey I bought last season will already look out of date?"

The last time a sport adopted a new uniform concept on a league-wide basis was in 2007, when the NHL adopted Reebok's Edge uni system. When that happened, several teams had to adjust their jersey graphics to conform to the Edge jersey's tailoring template, and other teams took the opportunity to make their designs a bit Edge-ier. But the Revolution 30 isn't as radical a shift as the Edge was. For the most part, NBA teams will look the same as they always have (well, except for the ones that were planning on introducing new uni designs this season anyway), and the difference between last year's retail jerseys and this year's will be hard to spot for all but the savviest of fans (like, say, the ones who are reading this column).

So if nothing major is changing, what is changing? Glad you asked. Here's Uni Watch's list of the 10 things you need to know about the Revolution 30:

1. A more fitted fit. The new jerseys are slightly tighter and more trim-tailored than the old ones. This is probably due to the influence of Nike's System of Dress college jerseys (although nobody at the league or adidas will ever admit that), but wherever the idea came from, Uni Watch counts it as a plus. Now can we get the shorts back to a reasonable length?

2. Holy jersey, Batman? No -- holey jersey. The new jersey fabric is dotted with pinhole patterns to help channel heat and moisture away from high-stress areas.

3. Numbers game. Aside from the pinholes, the biggest visible change in the uniform is that all the uni numbers are now made of mesh, not tackle twill cloth. The idea is that this will make the jersey's torso and back areas lighter and more breathable, but it also provides a textured look that Uni Watch kinda likes. The trade-off, however, is that the mesh fabric sometimes looks a little more washed out or less bright than the tackle twill used for the insignia lettering. Here's how the mesh numbers look on some other teams' jerseys:

4. Those sew-and-sews. Another change to the uni numbers: They're now heat-sealed onto the jersey instead of sewn down. The adidas folks had hoped to make all the jersey graphics heat-sealed -- in part to make everything lighter, and in part to avoid having any stitching that could rub against the players' skin -- but that turned out not to be possible. (More on that in a minute.)

THE ROAD NOT TAKEN

The NBA and adidas have made lots of advancements with the new Revolution 30 uniform system. But what weren't they able to do? Which ideas didn't pan out, which experiments flopped, and which concepts got left on the cutting room floor?

Uni Watch recently put those questions to Travis Blasingame, adidas's global basketball apparel director, who offered a surprisingly candid response. "We originally went into this on a no-sew basis," he said. "We were gonna bond everything, including the wordmarks, the numbers, with adhesive. We wanted that no-sew feel, so when you turned that jersey inside-out, you didn't see any stitching. That turned out not to be possible, because of the way teams launder their uniforms under very high heat. The technology isn't there yet on the adhesive side of things."

Of course, you wouldn't have to sew or adhere anything to the jersey if you just screen-printed the graphics onto the fabric (like on a T-shirt) or sublimated them (like those background patterns Nike has been putting on certain college hoops jerseys). That would make the uniform a lot lighter, too. Did that ever come up?

"We considered that, yes," said Blasingame. "But come on, this is the NBA. We don't want these guys to feel like they're playing in an amateur or rec league jersey. We want that perceived value, because the uniform is a badge of honor."

Uni Watch suspects the NBA and adidas wanted that "perceived value" mainly so they could keep charging high prices for polyester tank tops, but whatever -- the fact that they even considered going with screen-printed graphics is big news. They may not have gone down that road this time, but that may be where the future of basketball uni design is headed.

5. The exception that proves the rule. One team will not have the mesh numbers on the front of the jersey: the Warriors, because of their new uni design's unusual number format.

6. Some authentics are more authentic than others. If you buy a standard authentic jersey for $250, you'll get old-style tackle twill numbers, not the new mesh numbers. Why? Because many fans like to get their jerseys autographed, and the signature is often done on the number, which would be a problem on the mesh fabric. (If you want to buy a jersey and insist on having the mesh numerals, you can spend an extra $100 for one of these limited-edition boxed jerseys, which do have the mesh.)

7. Enough about the numbers already! OK, here's something non-number-related: Back in the olden days, all the drawstrings on NBA shorts were white. In 2002, the league started using black drawstrings for dark shorts and white for light-colored shorts. Now, with the new uni system, the drawstrings will match the uniform color. Seems like a minor thing, but it should effectively camouflage the laces when they fall out, which will make things look, you know, a bit less sloppy.

8. Keep it in your pants. Speaking of looking sloppy, more and more players have had their jerseys coming untucked in recent years. With the Revolution 30, adidas has addressed this problem by putting a silicone rubber band on the inner waistband of the shorts, which should help keep those jerseys tucked in.

9. Green scene. The new uni fabrics are made from 60 percent recycled materials. To Uni Watch's knowledge, this is the first time a league has used environmentally friendly uniforms on a full-time basis, instead of just as a one-off gesture.

10. It depends on what you mean by "new." Almost all the features of these new uniforms were test-driven in last season's All-Star Game uniforms. Some elements, like the zone-mapped pinholes, were even used in the All-Star Game before that.

So those are the changes specifically related to the Revolution 30 system. Of course, there are also lots of team-by-team uni adjustments this year -- adjustments that have nothing to do with the new system -- but we'll address those once we get closer to the start of the regular season.

Paul Lukas can't believe nobody thought of the colored drawstring thing before. If you liked this column, you'll probably like his Uni Watch Blog, plus you can follow him on Twitter and Facebook. Want to learn about his Uni Watch Membership Program, be added to his mailing list so you'll always know when a new column has been posted, or just ask him a question? Contact him here.