The slug is dead. Long live the buffalo!

That's the big uni-related storyline in the NHL this season, as the Sabres have finally wised up and retired their accursed Buffaslug logo, which was the object of endless ridicule and no small amount of fan ire since being introduced in 2006. The team's new uniform set features home and road designs based on the team's original leaping buffalo jerseys -- and wait, what's that third uniform?

The third design is a a new retro-ish alternate that will be worn for 12 home games this season, including the team's home opener Oct. 9. The lettering is a shout-out to the old Buffalo Bisons design, which was based on the look of a Pepsi bottle cap because the team's owners also ran a local Pepsi bottling plant. (Ironically, the Sabres' official soft drink nowadays is Coke, but apparently that didn't stop them from going with the Pepsi-inspired insignia.)

Things get a little weird on the back of the third jersey, which features a contrast-colored nameplate and unusual stitching on the uni numbers. According to a Sabres news release, "The faux felt numbers have a unique cross-stitched pattern in reference to early pro hockey jerseys." Apparently they're referring to something like this -- an interesting concept, but maybe one that would have been better off on the cutting room floor. Still, Uni Watch will withhold final judgment until seeing how the numbers look during game action.

While the Buffaslug's demise represents a major advance for humankind, there's plenty of other uni-related news on the NHL front. With the regular season set to begin Thursday, here's Uni Watch's annual team-by-team rundown:

• Uni Watch loves the Ohio state flag -- loves it -- but why did the Blue Jackets have to include the flag twice on their 10th-annivesary patch? When the patch is put on the jersey, you end up with a total flag-o-rama. Turns out you really can have too much of a good thing. In non-flag-related news, the Blue Jackets will unveil a third jersey Nov. 26. No images yet, but the Columbus Dispatch has reported that it "will feature a cannon as the central part of the main logo." Ka-boom!

• The Canadiens will be playing in the Heritage Classic on Feb. 20, although the throwback unis they'll be wearing for the occasion aren't throwing back very far. The design is based on what the Habs wore from the mid-'70s through the mid-'90s, which is pretty much the same as what they wear now, except for some of the trim on the uni numbers.

• The Canucks are celebrating their 40th anniversary with a throwback alternate jersey and a really plain 40th-anniversary patch. Like most of the teams with special patches this season, they haven't been wearing it during the preseason but will add it to their jerseys once the regular season begins.

• The Capitals will be wearing this throwback design for the Winter Classic game on New Year's Day. Great design, but here's something that's difficult to see in the photos: The jersey logo is actually one giant patch, not individually applied letters -- lame. Uni Watch isn't in love with the red helmets either (the originals were white). Good move putting the Winter Classic patch on the shoulder, though -- would've been way too cluttered if they'd put it on the chest.

• The Devils will once again trot out their red and green throwbacks for one game. The date they've targeted is March 18.

• The Ducks will be unveiling an alternate jersey Nov. 26. No images yet, but the generally reliable Icethetics blog is reporting that the design will feature the team's webbed D logo as a jersey crest, an idea that's long overdue. For now, the webfoot mark has already supplanted the team's insignia on the players' helmets. 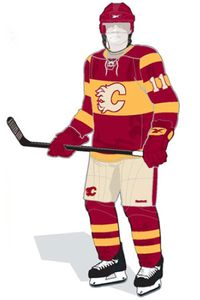 Calgary FlamesThe Flames will wear this bold design in their Feb. 20 outdoor home game against Montreal.

• Last season, the Flames wore a 30th-anniversary throwback uniform for five games against Canadian teams. They'll wear a similar design this season, slightly adapted for the Reebok Edge template, as an alternate uniform. Expect to see it about 15 times. In addition, the Flames will wear a special uniform for the Heritage Classic game Feb. 20. This feels very much like a "love it or hate it" design. Put Uni Watch firmly in the former camp. (Further details here and here.)

• New road uni for the Flyers, who've replaced their previous road threads with the throwback design they wore for last season's Winter Classic game. Uni Watch counts this as an upgrade.

• The Hurricanes are hosting this season's All-Star Game and will be marking the occasion with a chest patch.

• Serious back-to-basics move for the Islanders, who will go with their original retro designs for their home and road uniforms. And here's a subtle little maneuver: The Isles have removed the shoulder stripes that represented the team's four Stanley Cup championships but are still acknowledging the four Cups on their uniform. How? They've gone from three tape stripes to four on the "Y" in their jersey crest.

• Very nice-looking gold throwback for the Kings. Man, look at the old crown design on the jersey compared to the cheesy current one shown on the cap -- it isn't even a fair fight.

• When Reebok's Edge template debuted a few years back, many observers -- Uni Watch included -- complained that the Maple Leafs' jerseys were too plain-looking. They've now solved that problem. Amazing what a few stripes can do, no? Uni Watch also likes the old-school leaf patches on the shoulders and the lace-up collars, not to mention the striped socks. And in a move that practically qualifies as a public service, the Leafs have taken the league's most annoying player name and number typefaces and replaced them with something much better. Kudos all around.

• Teeny-tiny change for the Oilers, who've made a slight alternation to their helmet decal logo.

• The Penguins are marking the first season of their new arena with a sleeve patch. They also will be playing in the Winter Classic on New Year's Day and will have a throwback for the occasion. No confirmed design yet, but multiple sources indicate it will look something like this. If so, that will mark the first time the team's original skating penguin -- the fatter one, with the scarf -- has appeared on the team's uni. (For more details, check out this article about the guy who designed the logo.) 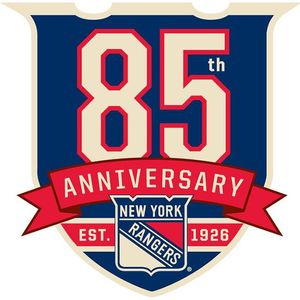 New York Rangers The Rangers will wear this commemorative patch.
A similar design will decorate the team's home ice.

• Too bad Mats Zuccarello-Aasen didn't make the Rangers' final roster cut, because he had one doozy of a nameplate. Here's hoping he gets called up during the season. Meanwhile, the Blueshirts have a new throwback alternate jersey -- nice, right? The little white smudge on the right shoulder is an 85th-anniversary patch. They haven't been wearing the patch on their standard home or road jerseys during the preseason but are expected to do so once the regular season starts.

• Every year around this time, NHL fans tell Uni Watch they've noticed the Red Wings are suddenly using straight block lettering for their player names. As Uni Watch patiently explains each time, this is a standard preseason quirk for the Wings. They'll switch back to their usual vertically arched lettering once the regular season kicks in.

• The Sharks have a new anniversary logo, which they reportedly will be wearing as a patch shoehorned onto their sleeves. That's a Photoshop job, not the real deal -- the team hasn't been wearing the patch during the preseason. The Sharks are wearing the anniversary logo as a helmet decal, however, and they appear to have been wearing a different logo on their pants.

• The Stars have flip-flopped the designations of their road and alternate jerseys.

• Might be a good idea to avoid watching the highlight packages on Friday nights, because the Thrashers have announced their third jersey -- probably the worst look in the league -- will be worn for Friday home games.

• Lots of small changes for the Wild. The good news is they've updated the awful shoulder patch on their road jersey; the bad news is the new patch design, which is based on these new wordmarks, is only a mild improvement. The worse news is they've gotten rid of their pants striping -- a definite downgrade. Also, Minnesota is yet another team that will be wearing an anniversary patch once the regular season starts. And just to keep us all on our toes, the script insignia from the team's third jersey is now being worn as a helmet decal, but apparently only at home, not on the road.

• The league is once again opening the season with several neutral-site games in Europe. The six participating teams -- Carolina, Minnesota, San Jose, Columbus, Boston and Phoenix -- will wear commemoative patches based on their games' locations. The Bruins, oddly, have already been wearing theirs during the preseason.

• Several teams have new center-ice designs and red-line patterns. (Do you know of others? Send info here.)

That completes this season's team-by-team rundown, but there's still one major category to cover: goalie masks and pads. Uni Watch will have complete coverage of those changes later this week.

Paul Lukas isn't exactly shedding a tear over the Buffaslug's demise. If you liked this column, you'll probably like his Uni Watch Blog, plus you can follow him on Twitter and Facebook. Want to learn about his Uni Watch Membership Program, be added to his mailing list so you'll always know when a new column has been posted or just ask him a question? Contact him here.