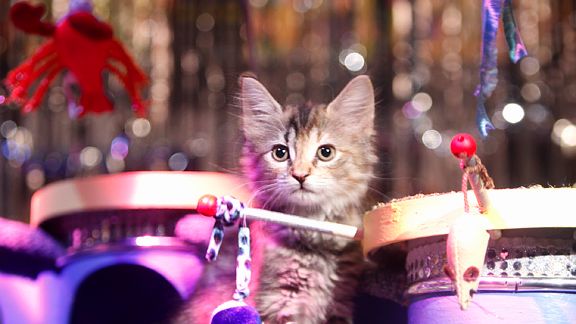 Animal Planet/David Holloway The kittens at the Puppy Bowl get their own glamorous halftime stage.

The Puppy Bowl gets some of its highest ratings during halftime of the Super Bowl, when many NFL fans take a break and switch over to Animal Planet. But the Puppy Bowl has its own halftime show, and nobody switches away from that, because it features the one thing that's even cuter than a big pile of puppies: a big pile of kittens.

The kitten halftime segment for Puppy Bowl VII was filmed in October in a Manhattan studio, one day before the puppy segment. I'm a total sucker for kittens, and my own cats have settled into their middle-aged layabout phase, so I figured checking out the shoot would provide me with a much-needed dose of kitten-osity. Here's how my visit to the studio went.

I arrive and am greeted by a publicist named Melissa. "Want to meet the kittens?" she says. Duh -- do cats like catnip? "OK, then come on, I'll take you up to the kitten green room." It hadn't occurred to me that showbiz terms like "green room" would be used for an animal show. Can cats even see green? (Yes, as it turns out, although dogs can't.) 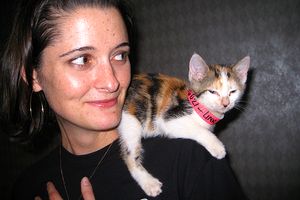 Courtesy Paul Lukas Hillary Tholen and Dora get ready for the show.

I follow Melissa down a series of hallways until she stops and opens a door. Inside I'm greeted by the sight of a young woman texting while an even younger kitten perches on her shoulder. It's pretty much the Cutest Thing Ever.

Once I stop oohing and ahhing long enough to regain my composure, Melissa introduces me to production coordinator Hillary Tholen (the texting human) and Dora (the perching kitten). "How long has she been up there?" I ask Hillary. "A while," she says. "She seems to like it there."

Melissa explains to me that the 16 kittens have been provided by the Pennsylvania SPCA and are already have adoptive homes lined up after the filming. I want to play with all of them, but there's no time for that, because now we have to go visit the set.

The Puppy Bowl's organizers say the casting is definitely the hardest part. Now in its seventh year, interest keeps rising. Unleashing the hounds! »

Just like in a real football game, the Puppy Bowl's halftime segment takes place on the same "field" that the "players" use. In this case, that means the miniature gridiron known as Animal Planet Stadium. When we arrive, workers are installing the set for the kittens' portion of the show. It looks like the set for a stadium rock tour, only with more dangling and rotating parts.

"It's all designed to help stimulate play," explains Mike Foerstner, the production designer who created the faux stadium and the halftime setup (and also had the brainstorm for the Puppy Bowl's brilliant water bowl camera, which of course is the Cutest Thing Ever). "We modify it a bit each year, but it's all intended to capture the glitz and glam of a Super Bowl halftime."

Foerstner and I have to cut short our chat because the crew is about to film singer-songwriter John Fulton's introduction to the halftime show. (This is a bit of Animal Planet cross-promotion, because Fulton will be hosting a new series, called "Must Love Cats," in February.) He smiles obligingly at the camera and strums away on his guitar while singing a childlike ditty he's written for the occasion: 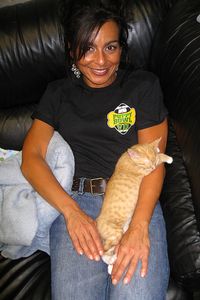 Then he adds a plug for his new series, and that's a wrap. It is not the Cutest Thing Ever, but it'll do. Or at least that's my assessment -- the director apparently disagrees, because he asks Fulton to run through it again. And again. And again. By the ninth take, Fulton is sounding worn-out and I'm ready to grab his guitar and do an El Kabong maneuver on the director's head.

Fortunately, my good mood is restored a few minutes later, as the kittens are brought down from the green room. Their handlers gently place them onto the set, where they begin exploring the landscape. Then a bunch of cameramen position themselves along the edge of the set, the director asks for quiet, and all the motorized toys on the set are turned on. Dangling feathers begin swaying back and forth, toy mice start going in circles, and so on. Meanwhile, a bank of lights creates a disco ball effect.

Some of the kittens immediately engage with the toys. Others just sit there, looking a bit overwhelmed. A few try to escape. And a few, apparently unimpressed by all the bells and whistles on the set, ignore the festivities altogether and start matter-of-factly grooming themselves.

The weird thing is that everything is silent. There's no music (it'll be added later), no talking, no sound of any kind except the occasional mewing of the kittens. It's very odd, sort of like watching a big party with the mute button on. Although I'm not allowed to get too close to the set, I'm able to shoot a little video of the proceedings:

After a while of this, the publicist sidles over to me and whispers, "Follow me -- I want to show you something." She says the same thing to two other journalists who are on hand and then takes us down a hallway to a side room, where the kitten antics are being shown on a pair of monitors.

"This is the first year we're shooting in 3-D," she says, handing us some special glasses. "Take a look." I sit down on a sofa, put on the glasses, and look at one of the monitors. In a somewhat predictable development, it turns out that kittens in 3-D are, well, you know.

Predictable or not, I can't stop watching. After a few minutes, I tear my gaze away long enough to look at the other two journalists, who are staring intently at the kittens and murmuring little coos of delight. It suddenly occurs to me that the three of us -- three media professionals wearing ridiculous-looking glasses while making googly noises in response to 3-D images of young cats -- are about the Dorkiest Thing Ever.

And I don't care. That's the power of kittens (and puppies too, of course): They can reduce us to quivering masses of Jell-O in about two seconds flat and make us like it. Good thing they don't have opposable thumbs or they'd surely have taken over the world by now.

Paul Lukas, a Page 2 columnist, is a firm believer in the "N + 1 Rule" of cat ownership, which states that if there are N people in your household, you can have N + 1 cats. Anything more than that and you're one of those crazy cat people.