My knowledge of pigeons pretty much boils down to two things: They make an awful mess on my fire escape, and Mike Tyson has always been fascinated by them.

That second item, like virtually everything else in America, has now given birth to a reality TV series, "Taking on Tyson," in which various pigeon-racing enthusiasts will pit their flocks against Iron Mike's. The show, produced by Animal Planet, is set to debut March 6.

I've followed Tyson since he rose to boxing prominence in the mid-1980s, so I jumped at the chance to interview him about his new show. Here's how our recent conversation went down -- just two Brooklyn guys talking about birds.

Page 2: Mike, what's the difference between the pigeons we see on the street and the pigeons that you keep on the rooftop?

Mike Tyson: The breeding. The ones we keep have been selectively bred to have the best bloodlines, like thoroughbred horses. A lot of that comes from Darwin and the research he did on rock pigeons in the Galapagos Islands -- he had a big impact on the pigeon world.

A lot of people don't like pigeons -- they call them "rats with wings." What do you say to people who don't get it when it comes to pigeons?

We call 'em rats, too. But people who don't like pigeons, that's just because they don't understand 'em. Just like when Europeans first came here and they didn't understand the Indians. What we don't understand, we hate and want to destroy. People don't know that pigeons have saved thousands of American troops during times of war.

You mean through carrying messages. 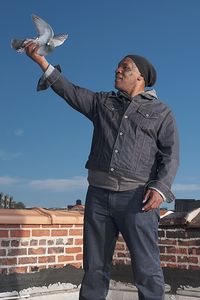 Animal PlanetTyson says he has looked after thousands of pigeons in his life.

Yes, exactly. And during Waterloo, when Napoleon was fighting Wellington, someone was there, someone from the Rothschild family or something. And they released a homing pigeon, and it went back to France or somewhere like that -- wherever the Rothschilds were -- with a message telling them how the battle was going. And they put all the money they had on the results of the war. That's how they won a bundle.

What's the hardest or most frustrating part about caring for pigeons?

They die; they get sick.

Is that hard for you, emotionally?

I try not to get too attached. That's why I keep breeder pigeons -- if a bird gets sick or dies, I can produce another one.

What makes a good pigeon better than a bad one?

They're like people -- they have aptitudes for certain things.

Can you tell their aptitude just by looking at them in a cage or a coop?

You can see the potential, but you can't really know until you see them in action. Just like a fighter in the gym -- he's got all these muscles, he looks tough, but then he gets in the ring and he's petrified, afraid to death. Same thing with a bird. They all look good, but you have to see what they can do.

How many pigeons would you say you've owned or looked after over the years?

Was there one that was a particular favorite?

I like magpie rollers. I like their markings, with the solid black body and only the wings are white.

But that's a type. I mean was there one particular bird that you especially liked?

No. My favorites are the ones I have right now.

You've bred and looked after pigeons before, but you've never raced them until now, right?

Correct, I've never raced them before. I had friends who raced their birds, and sometimes I'd go on a long run with them, but I never really had racing birds of my own. 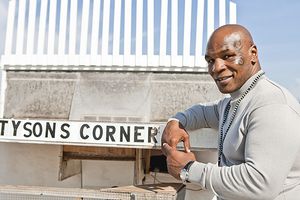 It's a lot of work! I like to just be up on the roof feeding my birds, and while I'm doing that I can talk on the phone, be lazy, eat food, all of that. But if you have racing birds, you don't have time for all of that because you have to take the birds out, fly them here, wait for them. It's time-consuming.

See, that's work -- racing homers is a lot of work. If you don't race them, that's more of a fat man's sport. See, the racing guys, they really ought to be skinny 'cause they work so damn hard. The rest of us, we just sit on the roof, lay back and eat food while we watch the birds fly.

When you were a young boxer, you had trainers and guys who taught you what was what -- guys like Cus D'Amato, Kevin Rooney. Do you see yourself in a similar role regarding the pigeons?

No, I'm not showing them anything. They know what to do -- that's the breeding.

You like birds and you used to be a fighter. Some people combine those two elements -- birds and fighting -- into cockfighting. Have you ever seen or been around cockfighting, and what's your feeling about it?

I went to a cockfight in Mexico. They wore gloves, like a boxer -- that was good.

I thought they wore sharp talons.

No, listen -- they had gloves that they put on the talons, so they wouldn't cut into each other so much. They'd still get bad gashes, but they weren't fighting to the death. I'm not a fan of that, when they fight to the death. I believe that you should let the dogs fight, let the roosters fight, but let the loser live to fight another day. I don't believe that they're no good once they lose.

What about the pigeons -- do they fight with each other?

So when that happens, do you have to separate them?

Not usually. Unless there's one bird who's totally dominating over another one -- if he won't allow the other bird to mate, have a family, he's just bullying him, maybe he's even beating up his woman -- then I pick that guy out. Sounds a lot like human beings, right? It's like a guy in prison who can't hang out with the other prisoners, so they have to put him in the hole!

As an animal lover who's had some experience with the penitentiary system, what's your feeling about Michael Vick?

Well, some people feel very strongly about him, like they'll never forgive him. Others say he's done his time and deserves a second chance.

Listen, listen. I don't know why people do what they do. What should we do with Michael Vick? Really, really: Why don't we castrate him? Why don't we do something bad to his children to teach him a lesson? Is that really the answer?

Or instead, we can say, "Hey, you've been given the wrong signals all these years, and you didn't realize you were destroying God's animals." So we have to change his way of thinking. Not kill him, not assassinate him. We have to kill his way of thinking in that particular area. So yes, we should give him another chance. And so far he's taken great advantage of it.

I can't let you go without a boxing question: How do you think you would have done, in your prime, against the Klitschko brothers?

I don't know. I hope I would've done good. You always hope you'll do good. You don't picture yourself doing bad.

What do you think of them?

So which is more entertaining -- Larry Holmes, the Klitschko brothers, or pigeon racing?

Paul Lukas is a Page 2 columnist. He hopes there's never a reality TV show about what pigeons do to his fire escape.