The Baseball Hall of Fame president talks about caps, typos and more

Three new plaques will be unveiled Sunday in Cooperstown as Jim Rice, Rickey Henderson and Joe Gordon are inducted into the Baseball Hall of Fame. But what happens if one of the plaques has a typo? And how did they decide which cap logo to use for Henderson, who played for nine teams (not including four stints with the A's)?

Hall of Fame president Jeff Idelson recently spoke with Page 2 about these and other issues surrounding the Hall's hallowed plaques. (For more information on how the plaques are manufactured, click here.)

Page 2: Did the very first inductees have plaques that looked like the ones being produced today? 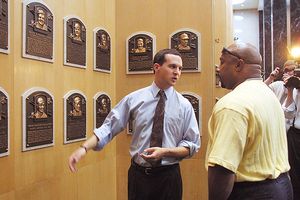 Jeff Idelson: The plaques are all standard in terms of shape and size.

P2: And the basic design motif has stayed the same?

P2: All the plaques have those two baseball bats and -- is it an olive branch or a laurel wreath?

P2: What's the origin of that?

JI: Honestly, I'm not sure. My sense of it is that it was emblematic of honoring greatness in the '30s.

P2: One thing fans are obsessed with these days is the question of which cap will be depicted on a player's plaque. It always seems to be controversial. Do you long for the days when players would play their entire careers with one team?

JI: From our standpoint, the logo isn't something we want to be controversial, because the last thing you want is to have a divisive factor when someone's being celebrated with baseball's greatest honor. And for any player who played for multiple teams, the fans in each of those cities should claim that player to be their own. Because without that player's time with that team, he arguably would not have been a Hall of Famer. But we try to decide where the player made his most indelible mark.

P2: When you say, "We," who are the actual people who make this decision?

JI: Our senior staff, our research team. They'll look at a player's career numbers and look at the impact. And quite honestly, it's usually a no-brainer. Then we have a conversation with the player, because we wouldn't do something unilaterally.

P2: I didn't realize the player had any say in the process. Wasn't Gary Carter, for example, unhappy with the decision to depict him wearing an Expos cap?

JI: Gary was comfortable with the decision when we made it. If you look at the totality of his career ...

P2: No, I agree, he had bigger years with the Expos than with the Mets. 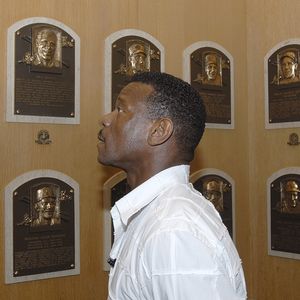 AP Photo/Tim Roske2009 inductee Rickey Henderson took a tour of the Hall back in May.

JI: And the fact that his Hall of Fame plaque bears an Expos logo doesn't diminish what he achieved for the Mets or what that means in the hearts and minds of Mets fans.

P2: But apparently he didn't see it that way. So do you sometimes have situations in which a player -- whether it's Carter or someone else -- gives you some pushback?

JI: With Gary, it was a more in-depth conversation, because he wanted to understand where we were coming from and our thought process. But once we discussed it with him, he was good with it. He would have liked to see a Mets logo, because he had some great fond memories of being with the Mets, while the Expos are a distant memory. But as a history museum, we have a responsibility to be historically accurate as we see it, even though that's somewhat subjective. At the end of the day, the decision has to end somewhere.

P2: Have there been other players whose caps were contentious?

JI: There was Wade Boggs, because he closed out his career in Tampa, where he's from. But he was very happy to have the Red Sox logo. And then this year, there's Rickey -- I mean, Rickey's a classic example of being all over the place. So Rickey and his wife, Pam, and I sat down and talked through that.

JI: If a player's career is very evenly divided, we'll give more leeway to him. We felt Winfield showed equal ability and impact during his time in New York and San Diego -- he didn't dominate more in one than in the other. So I spoke with him and learned that the fact that he broke in with the Padres, the fact that Willie McCovey was his hero and was playing there at the time, that made him feel a strong allegiance to San Diego. That was fine with us. Same thing with Sparky Anderson -- we talked with him about Cincinnati versus Detroit and gave him some leeway. He was more comfortable with whatever we thought.

P2: Why not just avoid all the controversy by showing players without a cap or wearing a cap without a logo or with the logo obscured?

JI: That's always an option, and there are some instances where we've recommended not showing a logo. But we generally prefer to show a team logo, because our visitors identify with them.

JI: I don't have a gut feeling, because, honestly, I haven't looked at his career. Guys who aren't on radar screen yet [in terms of being eligible for election], I don't think too much about them.

JI: Well, it's truthful! I couldn't tell you how many seasons he played for the Dodgers or the Mets, or anything like that. I have no idea.

P2: You supply the images Mindy Ellis uses as the basis for her sculptures, right? 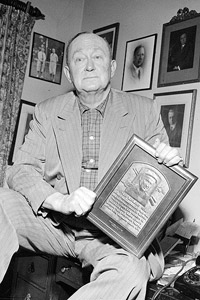 AP PhotoTy Cobb, pictured in 1957, holding a replica of his Hall of Fame plaque.

JI: We select as wide a variety of images as we can, as well as video, so Mindy will have multiple poses, hairstyles, facial changes and so on. But we'll also select the one that we feel best represents that player from the era in which he dominated, and we ask Mindy to sculpt from that image.

P2: Has there ever been talk of having the player do a live sitting, like the Pro Football Hall of Fame does for its busts?

JI: No. When visitors walk through the gallery, we want them to remember the player as he looked when he played.

P2: Who writes the text on the plaques?

JI: For the 15 years I've been here, it's been a combined effort out of our public relations department. The gist of it is created by our communications chief and myself, and then we'll vet it through our library for fact-checking, as well as our PR department.

JI: It is. What I've tried to do since arriving here in '94 is to provide a peek not just into the statistics but also into the qualities that helped define the player as a Hall of Famer. That was started by my predecessor, Bill Guilfoile. So you'll find that the plaques are much more descriptive than they once were. And that's by design.

P2: You've had to revise a few plaques in recent years, right?

JI: The two we've had to revise were for Jackie Robinson and Roberto Clemente. For Clemente, when he was elected, they inadvertently -- I assume -- reversed the order of his mother's maiden name and his given name. It said, "Roberto Walker Clemente," which is just wrong. His name was Roberto Clemente Walker. So we made that change in, I believe, 2000.

P2: And what about Robinson?

JI: We wrestled with the fact that there was no description of him breaking the color barrier. From my having read Robinson's autobiography and spoken with Rachel Robinson [his wife], it's very clear that he didn't want to be elected simply because he was a pioneer. He wanted to be recognized as a great ballplayer. So I assume that the Hall's administration at the time -- remember, this is back in 1962 -- took that to heart and didn't even mention that he integrated the game. But in today's day and age, not mentioning his historic role makes it look like we're trying to hide something. So we felt it was imperative to list that. And in deference to what we felt he would have wanted, we included it as the last line on the plaque, as opposed to the opening line.

P2: Did you create new plaques for Clemente and Robinson, or were you able to update the existing ones?

JI: We cast new ones. The original Clemente plaque is now in our Sandlot Clubhouse, which is our kids' area, to help explain, educationally, why we made the change.

P2: Do you ever have a situation in which the plaque is finished and has been up on the wall for years, and then someone points out a typo or a factual error that somehow slipped through the process?

JI: Nobody likes to make mistakes. But we're all human, and it does happen. Sometimes it's a typo, sometimes a statistical number has been flipped, that sort of thing. If you can catch them in time, you can have the plaque recast. If you don't have time for that, you can go through the induction ceremony with the mistake on the plaque and then have it fixed later.

P2: When have you had a situation like that?

JI: For one of the plaques in 2000 -- I believe it was Carlton Fisk's -- one of the numbers was transposed. We went through the induction ceremony with it but told Pudge beforehand, so he wouldn't be surprised, and then we had it fixed afterward. It's unfortunate, we don't like it, but it happens.

P2: What about mistakes on older plaques?

JI: Babe Ruth's plaque had a mistake on it -- it had the year that he began off by one year -- so we had it fixed. It hung in the Hall of Fame gallery for 60-plus years before someone on our staff noticed. And for Warren Spahn, the two middle numerals of his career strikeout total were transposed.

P2: And again, someone on your staff caught that one?

JI: I think it was a visitor who noticed it, sometime in the 1990s.

P2: You must dread that type of feedback.

JI: Luckily, it doesn't happen very often, and you approach those comments with a tad of skepticism, because you're hoping it isn't true. But there's nobody smarter or more in tune than our visitors. They are the true experts of the game, so it's good when they point out mistakes.

Paul Lukas made his first visit to Cooperstown when he was 9 years old and has been back many times since.