This Sporting Life: The News Cycle

Violent madness this week, and plenty of it. Retired fighter Arturo Gatti murdered in his bed? On the same day they buried former quarterback Steve McNair -- himself murdered a week earlier? Both men allegedly done in by women they "loved"? And both fatally undone by what our grandparents would have called, without irony, "crimes of passion"? 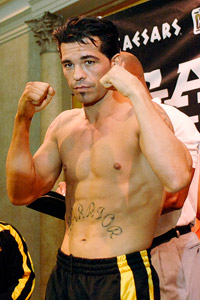 That's crazy. And while it's impossible to say yet whether all this high-profile terror and violent crime tips the scales toward mystery or simple domestic misery -- more Raymond Carver than Raymond Chandler -- it is possible to say this: it's nothing new.

"She pulled the trigger (thrum of bull fiddle). The bullet cut a silver line across the water. He sought with his bare hands to catch it, but it eluded him and, to his horror, bounced into his gut. A twisted dagger of smoke drifted up from the gun barrel. Fallen on one knee he groped for the bullet, sickened as it moved, and fell over as the forest flew upward, and she, making muted noises of triumph and despair, danced on her toes around the stricken hero."

That's Harriet Bird bidding Roy Hobbs a passionate goodnight on page 35 of the novel "The Natural."

In 1952, when Bernard Malamud set that fictional scene in the Stevens Hotel in Chicago, he was elaborating a very real shooting from a few years earlier. In June 1949, Phillies first baseman Eddie Waitkus had been famously shot in a Chicago hotel by poor, deluded Ruth Ann Steinhagen, an obsessed fan whom he'd never met before. Waitkus survived the shooting, played another five seasons and went on to lead a life thereafter that lay between ordinary and melancholy, depending on which biographer you trust. Steinhagen was institutionalized for a few years, treated and released, and then receded into history as the answer to a lower-case trivia question.

Weirdly, that shooting had been presaged by another almost exactly like it 17 years earlier.

In July 1932, Cubs shortstop Billy Jurges was shot and wounded by his lover, Violet Valli, a 21-year-old show girl, in yet another Chicago hotel. He managed to wrestle the gun from her during what she'd planned as a murder/suicide. She was going to kill them both because she thought he was about to jilt her.

A week later in court, however, love conquered all when Jurges chose not to press charges.

This shooting, too, Malamud used to fabricate that now-famous scene in "The Natural."

So this has happened before. Famously so. Thus was it at once sad and funny last week when the sports moralists and the Web site scolds and the talk radio knobs taxed us all with their shock or their indignation or their apologies. "An individual failure of morality," they said of McNair. "A general collapse," they said. "Judge not, lest ye be judged!" they said -- unless you're judging yards-per-throw-downfield, then judge away because that is, after all, why we're here.

And managed to overlook every like crime from Odysseus to O.J.

Instead, our elder national sporting press -- like Socrates or Wittgenstein or Saint Thomas Aquinas of the Champagne Room -- weighed in with stern rebukes to the notion that football players or the NFL might objectify and commodify women. Which assertion was noted by readers from coast to coast who thought they might themselves have gone insane.

Rest assured, dear reader, that it was only the dissonant and sophomoric double standard of the perpetual adolescent you detected; only the clammy hand and creepy moral relativism of the stadium and the sports page.

Big-time football seems to build only slightly less character in the press box than it does in the locker room. Which is to say very little indeed. But then most human enterprise fails to build character. Or even reveal it.

If you think, for example, that the sexual economy of the NFL is squalid, try the graduate English department at your local land-grant college instead. You'll be amazed at the parallels.

So a terrifying, heartbreaking week in which athletic destiny pushed back against us all, and those old heroic stories were deformed around bad appetite and bad faith and played back to us not as tragedy, but as farce.

Nobody wants to die a cautionary tale, after all. Life insists on death. We're the ones who insist on violence and slapstick.

All of it noteworthy not because it happened, but because it doesn't happen more often. How complicated our mortal pratfalls seem to have become.

"From a cot in the Bridewell hospital, where she is in custody on a charge of assault with intent to kill, Violet Popovich Valli, former show girl, yesterday explained that the shooting of Bill Jurges, Cub shortstop, was the result of too much gin."

Those were the days.