A few words this week about words, about language and football and insensitivity. Please note, however, that the language about which we're most sensitive in this case cannot be printed here in full, thanks to recently heightened sensitivities regarding insensitivity.

Start from the premise that I feel bad for Greg McMackin. Mr. McMackin, 64, is the head football coach at the University of Hawaii. Late last week, at a preseason news conference in Salt Lake City, Mr. McMackin used the word "f*****."

He used the word several times, in fact. First as a modifier to describe a pregame musical-comedy routine done a year ago by the Notre Dame team, as in that "little f***** dance"; and then several more times in a ham-handed effort to get a roomful of sports reporters to retract or ignore his original use of the word. 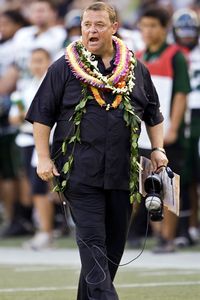 AP Photo/Marco GarciaGreg McMackin pledged to return seven percent of his salary prior to uttering gay slurs at WAC media day. How is the giveback penance?

So, backpedaling like a Cirque du Soleil unicyclist, having already used the slur, he then continued to use the slur while asking it be forgiven and forgotten that he's still using the slur. A perfect black comedy routine, in other words, a double-helix of futility, Ralph Kramden in Hell. Hammana-hammana-hammana.

(That a roomful of sports reporters laughs at each recurrence of the word -- whether nervously, admiringly or on the assumption that they're seeing a Division I football coach set himself metaphorically ablaze -- does the press box no honor. God forbid anyone, you know, actually stand up for anything. My colleague LZ Granderson did, and had an excellent column about that very phenomenon last Friday.

Let's be clear before we go on that this word, "f*****," is a slur, is a crude blunt instrument of language used to hurt, and is, in and of itself, undeniably hateful. Whether or not it's the gender equivalent of "n*****" I can't say. There's no consensus on the matter. It certainly seems so. Especially insofar as its power and its ugliness and its use as a kind of rhetorical jiujitsu within the very community it is most often used to denigrate. But as Chris Rock asks, is it OK for a white person to use the word "n*****?" Not really. Is it OK, therefore, for a straight person to use the word "f******?" Not really.

Think of it this way:

So, yes, I feel bad for Greg McMackin, undone in public by his own clueless ignorance and insensitivity.

But the bone-deep homophobia of the football locker room is well known to anyone who's ever walked into one, from Pop Warner to the pros, so none of this should come as a surprise.

Now I don't doubt for a moment that Mr. McMackin is a very nice man who meant no hurt to anyone. But Mr. McMackin is also the perfect product of his lifetime environment, a genial boob in the moral and cultural vacuum of football who can't imagine a world in which the word "f*****" used as an adjective would ever trouble anyone.

THE COMMENTS IN QUESTION

What did Hawaii coach Greg McMackin say at WAC media day? Click here
to hear the audio. Please note: This language may be considered offensive.

(It is perhaps important to note right here that Mr. McMackin is Hawaii's highest paid educator. At $1.1 million a year, he is in fact Hawaii's highest-paid state employee, outpacing the governor, paycheck to paycheck, by a ratio of almost 9 to 1.)

Following a university "investigation" into the matter that lasted a day comes the punishment. First laid out late Friday night in all its glorious inadequacy by our own Graham Watson here.

So a month's suspension and month's salary forfeited. Except that the coach is going to "volunteer" to work with the team for those 30 days, and he was going to take a seven percent reduction in pay anyway. I was vexed.

So I swapped e-mails over the weekend with Jim Donovan, the university's athletic director. Q and A:

How is a suspension in which the coach is still coaching the team -- even on a voluntary basis -- to be considered a suspension?

Wasn't Coach McMackin already in line for the salary reduction you describe? In what way is a previously agreed-upon pay reduction any kind of a penalty?

Do you believe that what the coach said was actually wrong? Or are you "punishing" him in this manner simply because it seems like he needs to be punished?

"Coach McMackin violated official university policies and that is the reason for this disciplinary action."

I'd like to thank AD Donovan for taking the time over an August weekend, and a busy one no doubt, to answer my questions so graciously and honestly.

The way I break down the punishment then, is this:

Still, the coach is out 92 grand, and the university has to spend the entirety of its late summer putting out public relations fires. You can choose to feel bad for everybody involved.

A couple of thoughts here, mid-column, to anticipate the comments thread before we get there:

I also get that this little sports column plays out in tandem or in parallel with things like our government's policy of "Don't Ask, Don't Tell" intolerance; of Ann Coulter making her bones by knee-jerking our bigotry; of Proposition 8 breaking hearts coast to coast; and of this terrible, terrible weekend in Israel.

I don't want Mr. McMackin punished for society's larger troubles any more than I want Prof. Henry Louis Gates or Sgt. James Crowley to bear sole racial responsibility for every inflexible cop or every hotheaded homeowner with an ego. The Gates/Crowley matter is in its way a reflection of the same civic problem -- intolerance. And whether you believe it's the intolerance Crowley showed Gates, or the intolerance Gates showed Crowley -- or the knuckleheaded intolerance Coach McMackin showed about lives different than his own -- it all gets you to the same place.

So Ecce homo, y'all. Behold the man. And the banality of his every prejudice.