Earlier this week, ESPN's parent company Disney purchased Marvel Comics. Like any good corporation, Disney likes to engage in cross-promotion from time to time (why else would I be telling you to watch "Cougar Town" starring Courteney Cox on ABC this fall? And preorder "Up" on Blu-ray! And buy a nice tin of assorted shortbreads at a Disney Store near you!).

So with the new acquisition of the Marvel empire, it's possible we'll be seeing figures from the world of sports popping up in comic books from time to time. With that in mind, here is a gallery of new heroes and villains that might be introduced in the next run of your favorite Marvel book this fall. 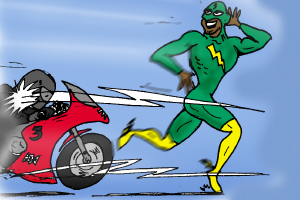 Powers: Superspeed that can be used to run through walls, across oceans and away from PED allegations.

Bio: An acclaimed international track star, The Bolt became bored with merely winning every race and decided he wanted to fully test human limits. To that end, he began injecting himself with experimental performance-enhancing drugs lifted from BALCO's laboratories. When combined with his natural abilities, the reaction created a superbeing capable of running at the speed of sound, a trait he displayed in his first post-drug race when he crossed the finish line before anyone else heard the starter's gun.

After his subsequent banishment and fall from grace, The Bolt turned to crime fighting in an effort to use his powers to redeem his name. He also really liked the idea of having another avenue to taunt those he defeated; the new superhero developed a habit of banging his chest and shouting to the heavens whenever he apprehended another confused crook.

Archenemies: The Flash, who often complains to the press that The Bolt cheated by obtaining his powers through drug use and not through the "natural way" of inhaling nuclear waste.

Powers: The uncanny ability to bum everyone out.

Bio: This supervillain discovered his abilities while serving as commissioner of baseball. Every time the public heard his name, it was associated with steroids, labor disputes, rising ticket prices, tainted records and all the other issues that caused America to become disenchanted with what used to be its national pastime. In the meantime, the sport was somehow making more money than ever, and Selig was cramming fistfuls into his own pocket along with the pockets of his friends.

Deciding to no longer limit his ability to just baseball, Dr. Gloom began overtaking other industries, including international commodity and currency exchanges. After digging up terrifying tales and finding new ways to make everyone sad and disillusioned, he managed to extract as much money as possible while everyone was depressed. Authorities fear he can't be stopped.

Weaknesses: The joy of the game and the public's ability to eventually tune out crap like steroids.

Archenemies: Salary caps, which would harm the baseball monoliths that drive the leagues' revenue and help support all of Dr. Gloom's cronies.

Powers: Strong intellect, uncanny ability to be in right place at the right time, heightened laidbackitude

Bio: While studying the ancient art of Zen one day, Coach X discovered a book that contained a secret no one had ever discovered. A dusty scroll slipped out of the leather-bound pages. Upon unfurling, it began to glow and float in the air, spinning. Scratched into its surface was a single sentence written in ancient text. It said "Always coach the best team."

Armed with this advice, Coach X gained a power that vaulted him from common coach to mythical being. Now, similar to his cousin, Professor X, Coach X is the mastermind that always gets credit for leading teams of superheroes to glory without having to fight himself. He had kept his superpowers a secret from the world until recently, when he donned a special hat to broadcast his true self to the world. Would he be able to succeed without his powers? I guess we'll never know

Archenemies: The Ghost of Red Auerbach

Powers: Combines the strength of The Thing and the ability to twist his body to fit any space of Mr. Fantastic with the arrogance of the Human Torch and the terrible acting skills of the Invisible Woman.

Bio: Despite being blessed with incredible abilities, this superhero desperately wants to be part of a superteam, but always seems to be left fighting by himself. Every four years he teams up with The Black Mamba and Flash Wade to form a supergroup that defends America, but afterward he is left to fend for himself.

Every year, management brings in a new hero to help him, but it never seems to work out. Meanwhile, The Fantastic One appears to be getting increasingly bitter and angry, and as a result the public likes him a little bit less each year. If his new partner, the Man of Steal, doesn't work out, this superhero might be in danger of turning into a supervillain.

Weaknesses: Publicly supporting teammates, handshakes, an inability to say no to any commercial idea 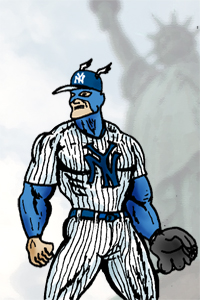 Bio: A legend in Gotham. New Yorkers will tell you he's far superior to his brother, Captain America, but the two share several similarities. Both are largely creations of local media in an effort to aid a war (one versus the Red Sox, one versus Axis powers), both have been declared obsolete and no longer necessary at one point before experiencing a resurgence, and hard-core fans will tell you both are vastly overrated.

Expect Captain New York to appear in a storyline in which he comes through in a big spot and then doesn't need to do anything for several years, as he can just rest on his reputation and plow through every available supergirl between ages 20 and 29 in the Marvel universe.

Weaknesses: Actresses, bottle service, any ball hit to his right

Archenemies: Sabermetricians, Jason Varitek, Alex Rodriguez (allegedly), anyone who doesn't wear all black on a night out

Powers: Super-slippery skin that makes him impossible to pin down; a wall of hair that hides his weapons and thesaurus; a gifted tongue that makes big, scary, terrifying men skilled in hand-to-hand combat back down without knowing why.

Bio: General Incoherence is a supervillian famous for confounding his foes with insane ramblings and then once they are fully under his spell stabbing them in the back. In his own words, "I utilize trickeration to besmirchify those who assail me, the living attestation of the American dream. I bring tragedous truth while lining my povertovous pockets through wit, grit, and BS. Only in America."

Weaknesses: Like Medusa, mirrors can be used to turn his power back against him.

Archenemies: Iron Mike Tyson, a former lackey who now wishes to throw him in a white tiger pit and send him to Bolivian. 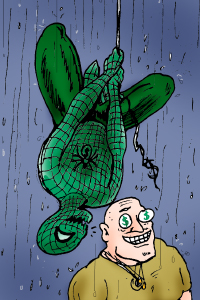 Powers: A super-supervillian that can take an ordinary person and turn them into a supervillian themselves through nothing more than a few well-placed whispers in their ear.

Bio: One day, a young man named Scott Boras was given a dollar as change after buying a slice of pizza in New York City. Little did he know this particular bill was once owned by Spider-Man's evil alter ego Venom and contained trace elements of an intergalactic substance that caused whoever it bonded with to be forever consumed with money and greed.

Soon changes overtook Scott. He no longer possessed the ability to think rationally. He began to love to hear himself talk. He started to shoot webs of lies designed to shake down his enemies for every last cent they had. After he lost all sense of perspective, the bonding was solidified and the transformation was complete. He is now bound to walk the earth, wreaking havoc with his insatiable greed and recruiting others to his cause. It's going to take a whole team of superheroes to bring him down.

Archenemies: The Green Goblins (aka Hank and Hal Steinbrenner, who are looking to avenge their father George, the original Goblin). They often butt heads during various encounters, but sometimes end up working together to attack the entire system.

Powers: The ability to never recover from injuries, a clawless offensive arsenal

Bio: Bizarro Wolverine is an interesting character, as all of his qualities are the exact opposite of the X-Men hero. Once he gets hurt, he is never able to bounce back. He appears to be afraid to attack and slash through defenses, instead preferring to attempt to run away from them. He's also not much of a loner as he's always surrounded by talent that he leans upon, such as USC's and New Orleans' offenses.

The only thing Wolverine and the Bizarro version share is a high level of popularity among the general public, while those in the know think they are overrated. Add it all together and it's clear why Bizarro Wolverine is the least effective superhero on this list. I certainly wouldn't want to depend on him to save my day.

Archenemies: Dr. James Andrews, whom he hopes he never has to visit again.