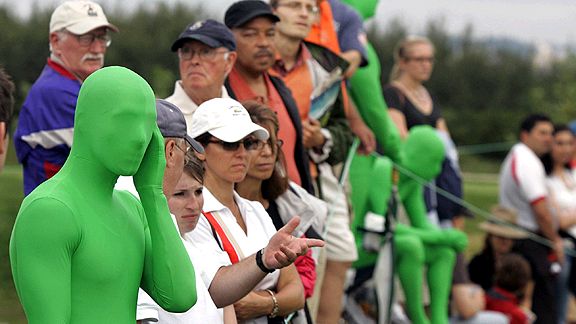 AP Photo/Mel EvansNext time you're at a sporting event, look around ... the Green Man may be lurking.

For golf fans watching this year's Buick Open, the hole begins like any other. There's Tiger Woods, clad in his familiar red shirt and dark hat, preparing to tee off. As the camera follows him leaning down to place his ball, the serene background of trees melts into a shot of the gallery anxiously awaiting Tiger's mighty drive.

Then, as the camera continues to pan, something out of a Dr. Seuss novel or a Timothy Leary acid trip flashes on the screen. In the lower left-hand corner appears a man in a green, full-length spandex bodysuit dancing joyously without any regard for his surroundings. From his carefree demeanor, you would think that he's the one who belongs and it's everyone else who is out of place.

Then, as quickly as he appeared, the camera moves back as Tiger straightens up, and the mysterious man is gone, leaving everyone at home to wonder whether a bad batch of medication or a slow gas leak caused them to hallucinate the whole thing.

But I assure you, it was all too real. What golf fans witnessed was the Green Man, and since then he's become a full-fledged sports phenomenon, popping up at games from coast to coast and appearing on ESPN more often than Texas Hold 'em. He's morphed into the sports world's version of Waldo.

Here is a wish list of 10 sporting events for Green Man to appear at. College students, consider this your biggest challenge since JFK's "Ask not what your country can do for you" speech.

So where did he come from? It all began outside Lincoln Financial Field in Philadelphia on an October night a little more than three years ago. Rob McElhenney, the star and creator of the cult classic turned hit TV show "It's Always Sunny in Philadelphia," had just finished watching his beloved Eagles defeat the Cowboys in one of the most anticipated games of the season, as Terrell Owens was making his first appearance in Philly since defecting to Dallas. The combination of the Eagles' triumph and T.O.'s failure had sent the fans at The Linc into an absolute uproar, and after the game the jubilant crowd spilled off into the parking lot, ready to celebrate the win.

Although many fans returned to their cars to renew their tailgates, McElhenney's friend had a different plan. Without warning, his buddy (who is a well-respected orthopedic surgeon) stripped off his clothes and donned a full-body green spandex leotard and sprinted off to high-five everyone in the parking lot. A legend was born.

"He was running all over the place, and everyone wanted to take pictures with him," McElhenney recently told me. "Everyone started chanting, 'Green Man! Green Man!' It went on for several hours, and all I could think was, 'My god, there has to be a way I can take advantage of this on the show.'"

When McElhenney returned to Los Angeles, he had a hard time explaining to his writing partners and fellow stars of the show, Glenn Howerton and Charlie Day, exactly what he had witnessed, but he convinced them they had to see it for themselves. So they ordered a suit from Japan that was identical to the outfit that McElhenney's friend had worn. As soon as Day put it on, everyone instantly agreed, saying, "Yeah, that's got to go on the show."

Green Man made his debut the next season in an episode entitled "The Gang Gets Invincible," which centered on three of the show's central characters trying out for the Eagles, just as they had seen in the film "Invincible." He instantly became a fan favorite. The moment McElhenney and Howerton saw Day dancing in the suit, they knew it was something fans would enjoy and thought it might spawn a few imitators across college campuses. They were right about the imitators but wrong about the scale, and before you know it, Green Man started spreading faster than gremlins exposed to water. 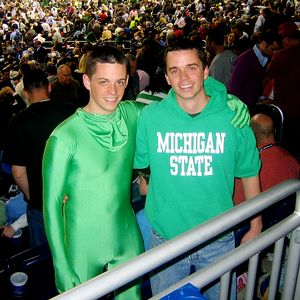 Now, Green Man is all over the place. As they imagined, college campuses are ground zero, and he appears at seemingly every college football game. Students have really embraced the character and seem to relish the opportunity to wear masks, which gives them the courage to dance and make fools of themselves in public without fear of subsequent embarrassment. Social media sites such as YouTube and Twitter just feed the craze, as people race to put up clips and pictures from their latest Green Man adventures.

Although he hasn't gone the viral video route, one student who has become well-koown for rocking the Green Man outfit is Jack Cogswell, a junior at Michigan State who is among the Spartans' biggest fans. After attending every game his freshman year and seeing the passion in the student section (known as the Izzone), he was inspired to do something special for his sophomore campaign. A fan of "It's Always Sunny," and recognizing that green was built right into the school's color scheme, Cogswell decided to don the Green Man outfit for every home game last season. Doing so made him a popular figure in the Izzone.

"I didn't expect it to catch on like it did," Cogswell said. "Reaction from the crowd has been very positive, and the players seem to like it. Goran Suton came over after every game to rub my head. One time when I told a player that I was the guy who dressed up like Green Man, he jokingly said, 'You're on ESPN more than I am!'"

Besides the obvious attraction of getting playful noogies from the team's star player, wearing the suit ended up giving Cogswell a hidden benefit as the Spartans made their run to the Final Four.

"I got shut out of the student ticket lottery, and I thought I was going to miss the games," Cogswell said. "But then my brother Adam, an MSU alum, flew in from California and procured two tickets. He said I could have one on one condition: I had to wear the Green Man costume."

So wear it he did. Although MSU came up short in the championship game, it certainly wasn't because of a lack of effort on Cogswell's part. During breaks in the game, he ran around Ford Field trying to fire up the crowd and high-fiving everyone in sight. At one point, he found himself next to a UNC fan, so in true Green Man fashion, he danced around his rival fan until the guy turned to him to say, "Boy, you done gone crazy." This just got the MSU crowd going even more. Cogswell counts the experience among his favorite memories. (It wasn't my favorite story he told me, though. Last Halloween, a drunken Indiana Jones was whipping people in the street, so our brave hero rushed in, performed the patented Green Man junk-kick-and-pose on the menacing faux archaeologist, then yelled "Green Man!" before sprinting off into a cheering crowd. College is the best.) 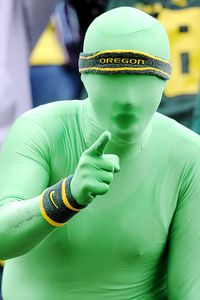 Cogswell doesn't get to have all the fun, though, and it's not just college games that are blessed by an appearance from the Green Man. Unsurprisingly, the phenomenon is very strong in Philadelphia, and Green Man is now a regular fixture at Phillies games. Sometimes he looks on concerned, sometimes he tries to fire up the crowd and sometimes he just poses so that a guy who looks like a heavier version of Brett Favre can check out his backside. But he's always there and has even been spotted at the playoffs. For McElhenney, who is a die-hard Philadelphia-area sports fan, it's a thrill to contribute something to the local scene, if only because it gives him the opportunity to go to more games. (Although, no, it's not him dressed as Green Man, but it might be David Cook.)

But just like the show's popularity, the trend continues to extend to new places. In addition to his now-infamous cameo at the Buick Open (which McElhenney said was the strangest place he's ever seen Green Man, remarking, "It's such a classy event and such an unclassy character"), Green Man has showed up rooting for the Nationals, cheering on the Celtics (in the playoffs versus the Bulls, no less), running the Chicago Marathon and even showing his support for President Obama.

The movement will be further fueled by the "It's Always Sunny" episode that debuts Thursday at 10 p.m. on FX, as it features the much-anticipated return of Green Man. Even if you haven't seen the show before, sports fans should tune in, as the episode is entitled "The World Series Defense" and features plenty of flashbacks involving last year's championship series, including a standoff between the Green Man and the Phillie Phanatic that is sure to make fans and nonfans of the show laugh alike.

With the new episode exposing even more people to the character, the craze certainly doesn't appear to be going anywhere. Also, Halloween is approaching, and Green Man is expected to be a popular costume this year, so appearances at everything from hockey games to curling matches can't be far behind as more and more people own the outfit and seek to find excuses to wear it.

So get used to seeing him, and consider showing some appreciation to the fan who has the guts to wear the leave-nothing-to-the-imagination spandex and break out his dance moves in front of thousands of people.

Toby Mergler is a freelance writer based in Washington, D.C., who has previously written for MLB.com, Fanball and the Virginia Law Weekly. He can be reached at tobymergler@gmail.com.