Stephen Strasburg is creating a fan base

WASHINGTON -- On a typical June day in our nation's capital, the air is heavy with oppressive humidity. Traffic grinds to a halt as the masses try to escape the city. Countless flocks of schoolchildren, ostensibly visiting the city's museums, hang out in large mobs on sidewalks, obstructing the path of hapless pedestrians.

It's a perfect recipe to make D.C. residents feel uncomfortable, angry and trapped -- pretty much the same way they feel about the local sports landscape. 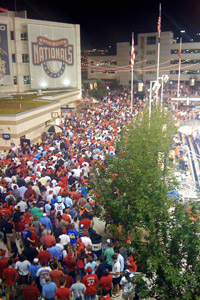 Toby Mergler for ESPN.com A full house in Washington means a new era for the Nationals.

But Tuesday was no typical June day in this city. The sun was shining, a breeze was blowing and the air was heavy with excitement. The city grinded to a halt in anticipation of an inauguration. And the crowd at Nationals Park -- a glorious, seldom-seen sellout crowd -- brought U2-level energy to what is usually a karaoke bar atmosphere.

The national hype surrounding this soon-to-be international holiday reached unprecedented levels. If it's to be believed, Strasburg's first pitch in 3-D will actually break through the fourth dimension, travel back in time and strike out Babe Ruth. Before long, world peace will be brokered when global leaders agree they are too terrified of Strasburg's fastball to act in aggression again.

But what about the local impact? Even with the excitement and buzz in the air, are Washingtonians buying it? Or are they too scarred to love again? Page 2 conducted a completely unscientific, anecdotal survey of fans at Nationals Park on Tuesday to unearth these unquestioned facts.

Will Strasburg win a World Series with the Nats?
Yes: 80 percent. No: 20 percent

Will Strasburg win an MVP award?
Yes: 20 percent. No: 80 percent

Will Strasburg win a Grammy?
Confused by the question: 100 percent

Washington is undeniably a Redskins town. Because the team wins fans over while they are young, it has a stranglehold on the city's affections. The region's passion for the Redskins infects people and takes deep roots in their lives.

In contrast, the Nats have almost no history. After one start, Strasburg arguably joins Ryan Zimmerman and Alfonso Soriano as the best players ever to suit up for the team. No one grew up watching them, and Cristian Guzman doesn't exactly have the drawing power of Cal Ripken.

That could all change in the Strasburg era.

Suddenly, fans are heading to the stadium to root for the Nationals -- and not their opponents. Suddenly, the team is appointment television every fifth day. Suddenly, winning a championship can possibly be trumped by something greater -- the joy of witnessing breathtaking greatness for the next 15 years and becoming infected by it.

Seeing lines form at ticket windows immediately after Tuesday's game made it clear why Strasburg's debut was so important for this city.

Baseball returned to D.C. five years ago, but it wasn't until Tuesday that a fan base was born. Washington fans are ready to love again.

Toby Mergler is a freelance writer based in Washington, D.C., who has previously written for MLB.com, Fanball and the Virginia Law Weekly. He can be reached at tobymergler@gmail.com.