EAST HARTFORD, Conn. -- Working for Page 2 isn't as easy as you might think.

Over the years, we've assigned writers to endure blindside hits, undergo a streetball-themed makeover, take to the streets of Indianapolis to impersonate Peyton Manning and compete in the World Wife Carrying Championship.

PAGE 2 ON THE UFL

To my knowledge, however, none of our correspondents has ever been asked to take up arms.

So when given the chance to dress in Revolutionary War attire, brandish a musket and fire a cannon in the name of Page 2 recently, I jumped at the opportunity.

First, a little background. Two Colonial-era re-enactment troupes, the 6th Connecticut Regiment and the Royal Irish Artillery, provide entertainment and firepower during home games of the UFL's Hartford Colonials. Under the direction of re-enactor Dave Loda, who portrays Lt. Col. David Humphreys, the two groups combine to form the United Colonial Forces. Whenever the Colonials score, the regiment salutes the team with a round of musket fire, and the artillery celebrates with a cannon blast.

By joining these re-enactors to party like it's 1776, I would also get the chance to play football with a horse. How could anyone resist?

As it turns out, you can't simply walk into a costume shop and find authentic Revolutionary War clothing. Fortunately, Loda was kind enough to outfit me before the game. Dressed in a tricorn hat, puffy white shirt, green wool blanket overshirt, black soldier boots and a black cloak, I was ready to go. 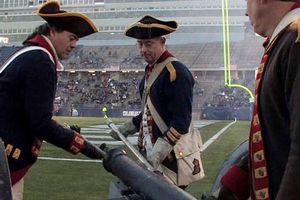 Michael Papazian for ESPN.com Members of the Royal Irish Artillery clear out their cannon after loudly punctuating a Hartford score.

Loda has participated in re-enactments for about five years. Like most re-enactors, he participates both for fun and to provide a lesson in American history.

"The Colonials averaged about 15,000 fans per game this season," said Loda, a retired Navy pilot. "So that means we were able to bring a high-quality living history experience to approximately 60,000 local people in a sports venue who would not normally be exposed to it."

After getting suited up on game day, it was off to throw passes to Loda as he rode his horse, Colonials fan favorite Huckleberry Finn McCool. This is more easily said than done, because it's highly unadvisable to hit the horse -- especially in the head -- with any of your throws. Fortunately, no horses were harmed in the making of this article or video, and after a few minutes I was able to measure passes and laterals with surprising accuracy to my fast-moving target.

Soon after, regiment member Ross Kenney gave me a crash course in handling a musket. Fortunately, our game-day forecast called for dry -- albeit windy -- conditions. This was great news, because muskets and precipitation don't mix well.

"In inclement weather, muskets were hardly ever used," Kenney said. "Because what happens is the black powder absorbs the moisture. Especially on a humid day, it just turns to [expletive]." 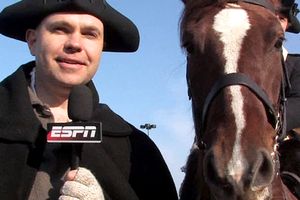 After that, with cameraman in tow, it was off to follow Loda through the parking lot as he and Huckleberry entertained tailgaters and posed for photos with fans. Before long, it was time to enter the stadium and receive cannon instruction from Ed Kreutz of the Royal Irish Artillery and fire a practice blast.

Kreutz has re-enacted for more than 30 years and has witnessed thousands of cannon blasts. Still, the chance to entertain in a stadium atmosphere was a new experience for him.

"The biggest surprise was the roar of the crowd and their appreciation," Kreutz said. "We were surprised at just how much they love it when that cannon goes off."

Now, we just needed the Colonials to score in order to discharge our munitions. Unfortunately, the team was coming off a seven-point output the previous week and opposing the UFL's top team, the Las Vegas Locomotives.

As it turned out, Hartford played its best game of the season. So with the Colonials driving for their third score of the game, I made my move to convince Kreutz to allow me to fire the cannon next.

"So you like to fire the cannon, huh?" he asked, eyeing me as if I were the unsupervised teenager next door shooting off bottle rockets. 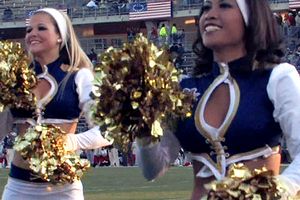 Michael Papazian for ESPN.com Not everyone on the sideline wears Colonial attire.

Moments later, I held the lighting device, called a linstock, and applied the slow match to the cannon's touchhole. Almost instantly, I basked in the subsequent blast of sonic fury and smoke, feeling just a tiny bit like Robert Duvall in "Apocalypse Now."

"That was sweeeeeeet!" I howled, unwittingly unleashing my inner Napoleon Dynamite.

Although I was able to convince Kreutz to let me detonate a celebratory blast, I was unsuccessful in my bid to blast a batch of various foodstuffs -- namely a giant burrito, a cantaloupe, a pineapple and a massive butternut squash -- into the stratosphere.

The Royal Irish Artillery depicts a unit of King George III's artillerymen -- not American revolutionaries. But because the group wears blue jackets, a number of observers incorrectly conclude it depicts an American unit.

"The British are coming!" one fan screamed to the artillery.

Ultimately, the Colonials on the field used a steady performance from quarterback Josh McCown and an impressive defensive effort to beat the Locomotives 27-14. More importantly, from my perspective, no injuries were sustained during firing exercises.

And I got to play football with a horse.