Four square and several days ago ... 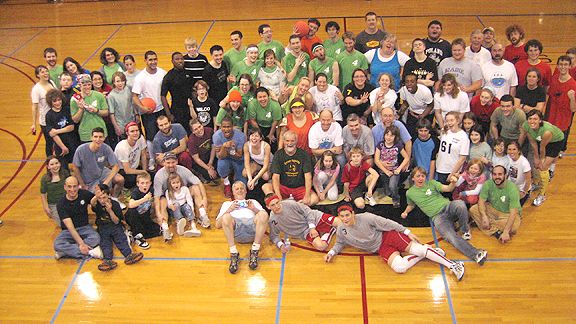 Squarefour.orgCompetitors from around the nation converged at the sixth annual Four Square World Championships.

BRIDGTON, Maine -- It takes a certain kind of confidence for an athlete to wear a cape. You can't just be good. You have to be amazing, as in world champion-caliber amazing. Otherwise, you run the risk of looking ridiculous.

"I can't say I ever had any dreams of being a four square champion until I found out about the world championships of four square," Housh said. "Then the dream came alive."

That dream came true Saturday night when Housh, decked out in the look that has helped make him an icon on the four square circuit -- orange T-shirt, black cape, '70s style headband and knee pads featuring growling tigers -- won the men's division of the Four Square World Championships.

The event, now in its sixth year, was founded the same way many great athletic events come to be. Organizer Peter Lowell did a Google search, and it returned nothing.

"There was nobody claiming the world championship, so we decided to lay claim to it," Lowell said. 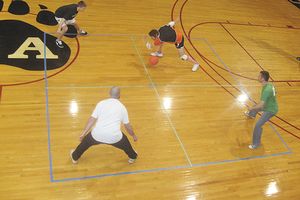 Maria Burns Ortiz for ESPN.comFour square isn't all fun and games. The competition is intense when a world championship is on the line.

Again aided by the Internet, Lowell paired up with Squarefour, a four square club out of Boston, and the tournament took off. Held as a fundraiser for the Lakes Environmental Association, the event draws participants from all over. Of the nearly 100 competitors in this year's field, players flew in from California, braved snowstorms to cross through Pennsylvania and drove in from all parts of New England.

"When you start to announce that you have a world championships, suddenly people from all over the world are like, 'Whoa, how come you didn't invite us from Australia? We play a lot of it,'" Squarefour co-founder Sean Effel said. "Or people from the UK say, 'We play it all the time, why didn't you invite us?' Then [like a group that came from Newfoundland a few years ago], they say you don't play it right."

The rules are always a point of contention.

"There's all these custom rules," Effel said, rattling off just a handful of the hundreds -- if not thousands -- of interpretations. "There's tea party, bus stop, around the world, shark attack, stonies, slammies, spinnies. It's insane."

But the tournament sticks to the basics. A court consists of one large square divided into four smaller squares, numbered I-IV. Each competitor is responsible for his or her quadrant. The player in the fourth square serves, and you can score points only if you're in the fourth square. The objective is to bounce the ball out of one square into any other square until a player makes a mistake. That happens when it bounces out of your square or if you hit it out of the playing court. In that case, you're out, and the person serving gets a point. Players rotate into the first square and work their way up to the fourth square. The winner is the one in the top-ranked square for the longest amount of time. Because the game never has to end, the competition has time limits. After a one-hour first round, half the field moves on to a 40-minute semifinal, with eight players advancing to a 25-minute final. The person with the most points after the final round wins.

Dana Ostberg was among those gunning for a win. The 32-year-old nurse won the women's championship in 2005 and 2006, and she was looking to bounce back from a tough loss last year. After Justine Petrillo took the crown in 2007 and 2008, Ostberg flew up from Baltimore during the middle of nursing school exams to compete for the right to be the first three-time world champion in 2009. Petrillo ultimately took the title, and Ostberg realized she wouldn't just have to elevate her game, but also her look. 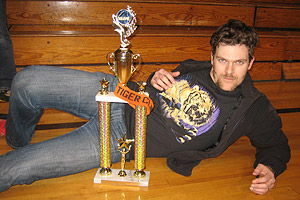 "This year, I figured I needed to have a costume that would motivate me to play a little better on the court," Ostberg said. "Unfortunately, Justine is not here. But I don't like to play up that fact. [Petrillo was out with a wrist injury -- seriously.] At the end of the semifinals, I was having a little difficulty with my skirt falling, but other than that, I feel like the costume only enhances my play."

Her ensemble complete with a gold cape was that of a … chicken?

"Actually, I'm a phoenix," she said. "A phoenix rising from the ashes because it's been a couple years since I won. It's kind of difficult because I was looking on the Internet, and what does a phoenix look like? It's a mythical creature, so they don't have lot of pictures, so I went with this [gesturing to her outfit] and my lucky argyle socks."

Ostberg made the finals but fell short in her quest to recapture the title. That honor went to Corey Carmichael, a high school senior from Portland, Maine.

"A bunch of people made fun of me for coming, so I'm going to go back and say, "Guys, let me tell you …" Carmichael said. "I'm not sure if I'll bring [the trophy] to school because I don't think it will fit in my bag. But I will be telling everyone."

She did, however, lament the fact that her title came too late to put on her college applications. Carmichael had attended the tournament two years ago but didn't compete -- even though the world championships are open to the public.

"I thought it would be really intense," she said. "I just wanted to scope it out beforehand."

The scouting paid off. Especially for a rookie, the competition is frenetic. In addition to bounces and diving saves, competitors are constantly running on and off the floor. Players bounced out of a game report their scores and line up to come back in. On Saturday, shouts of "clear" (requesting a new player) echoed across the Bridgton Academy gym, and on more than one occasion in the men's final, things got a little heated.

"Now we know what the competition is like, so we know what we need to work on for next year," up-and-comer Kyle Dickinson said. 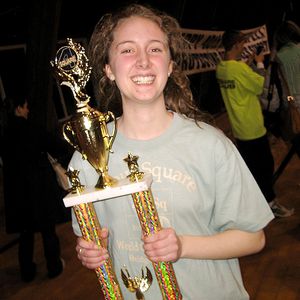 Squarefour.org Corey Carmichael of Portland, Maine, captured the women's championship this year in her first attempt.

Dickinson and his teammate, Jake Lear, flew in from Sacramento, Calif., just for the event. However, as many have learned when taking to their sport's biggest stage, for every athlete who leaves victorious, dozens more leave disappointed.

"Nobody believed us when we said we were going to come," Lear said.

"And we don't have anything to show for it right now," Dickinson added.

"Well, we have shirts," Lear pointed out.

Next year, the two high school sophomores hope to return home with some hardware. Chris Glasser certainly understands the importance of bringing back a trophy. The 27-year-old won the men's division last year and took full advantage of his reign.

"I was as obnoxious about it as I could be," Glasser said. "I let everyone I possibly could know that I was a world champion, and they probably weren't a world champion in anything."

He kept the trophy on his desk at work for everyone to see -- and that included Housh, who happens to be his boss.

So will Tiger Claw do the same?

"I may bring it in," Housh said. "I don't think my wife will want it in our living room."

For Housh, a three-time competitor and the 2007 runner-up, there was no question as to whether he'd take the sparkly gold trophy this time around.

"I didn't want to say anything before," the 34-year-old communications director said on his way out of the gym. "But it's the Chinese year of the Tiger. This win was fated."

With that, he walked away, his short, black cape trailing behind him.

Maria Burns Ortiz is a Page 2 contributor and also writes for ESPNSoccernet. She can be reached at mariamburns@gmail.com.