A smell of wine and cheap perfume

The first thing you hear is that keyboard.

It's one of the most iconic in music history -- perhaps second only to the opening strains of Europe's "The Final Countdown," although that's popular more for ironic reasons -- and it's during Jonathan Cain's ivory-tickling riff that a wave of recognition hits you. Your face slowly creases into a smile as you realize how you will spend the next 4 minutes, 11 seconds. That's when Steve Perry's unusually high-pitched vocals kick in:

Even before Neal Schon's repeating guitar lick fades in, you're belting out the story of a city boy with the same railway destination. No matter the stadium or the sport or the team, thousands of other voices rise as one alongside you. 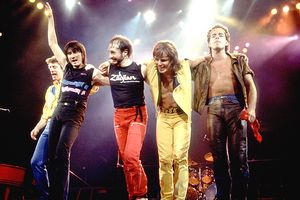 Paul Natkin/WireImage.comJourney's music transcends generations, although their outfits most certainly do not.

The opening track from Journey's seventh album, "Escape," the song was merely a modest hit when it was released in 1981, reaching No. 8 on Billboard's mainstream-rock chart. ("Open Arms" off the same album was actually the biggest hit, reaching No. 2.) But in recent years, "Don't Stop Believin'" has undergone a Rick Ankiel-like rebirth in our collective consciousness.

In the past three years alone, the song was covered by Kanye West in honor of his late mother, was featured in the Broadway musical "Rock of Ages" and was the focal point of the pilot for Fox's "Glee." In 2008, it became the most downloaded catalog song in iTunes history -- "catalog" meaning material released before the iTunes Store was launched. But its biggest impact has been in the sports world.

(There's an argument to be made it's had an equal impact in the world of karaoke. But our ears aren't willing to research it.)

Once used almost exclusively at home games for Detroit-based franchises -- the Motor City crowds especially enjoy the part about the aforementioned city boy being "born and raised in south Detroit" -- the song now seems to be receiving more sports arena play around the country than Gary Glitter's "Rock and Roll (Part 2)" or the "Dee-fense" chant.

During the 2007-08 NHL season, Washington Capitals rookie center Nicklas Backstrom began playing it in the locker room after every win, leading the Caps to co-opt it for their playoff run. Last year, a new incarnation of Journey -- with Perry vocal-clone Arnel Pineda filling in for the real deal -- sang the song at the Super Bowl XLIII pregame show. Most recently, the smell of wine and cheap perfume wafted into Chavez Ravine, when the Los Angeles Dodgers made it their unofficial eighth-inning stretch song, no matter the score. "If you're winning, don't stop believing," Dodgers executive Charles Steinberg said. "If you're tied, don't stop believing. If you're losing, don't stop believing."

(If you listen to it over and over, you'll be astounded at how perfect a stadium anthem it is. The structure of the song -- with the sing-a-long chorus not coming until the end -- builds and builds like the stress level in a closely contested playoff game. "That's definitely part of its appeal," said Mark Richardson, managing editor at Pitchfork.com, a Chicago-based music commentary Web site. "Each verse keeps hooking you in and pulling you forward because you're looking for that big climax of 'Don't Stop Believin'' that doesn't come until the very end." 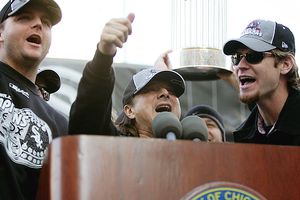 While the media programmers at Dodger Stadium provide lyrics on the various scoreboards while the song plays, the assistance is clearly unnecessary. "Plenty of songs have it where [the fans] sing the chorus," Steinberg said. "But fans sing it right from the top, right from the first verse."

A 28-year-old song has no business being this ubiquitous.

For people between the ages of 40 and 50, knowing the ins and outs of the song makes sense. It was released when they were between the ages of 12 and 22, during that magical time in one's life before the importance of music was cast aside for the worries of "real life." But for everyone born after 1969, there has to be a specific moment when the song was reintroduced to popular culture. Not surprisingly, many folks believe that moment to be June 2007, when "The Sopranos" went off the air.

"That was its breakthrough moment," Richardson said. "When people said this isn't actually a cheesy 'guilty pleasure' but an amazing song. It acquired a new air of respectability that it didn't have before."

Not to mention a whole new level of financial success.

The week after Tony Soprano looked up to see daughter Meadow ring the bell as she walked into Holsten's, "Don't Stop Believin'" shot up to No. 1 on the iTunes chart. The fact that the show ended in an ambiguous way only helped.

Internet theories about what exactly happened led to thousands of articles, blog posts, message board rants, etc., all trying to figure out why creator David Chase decided to use this particular song. But while Cain agrees that the song's use in "The Sopranos" "certainly helped make it hip and less campy," he feels the true date of rebirth should be traced to a South Side Chicago bar in August 2005.

"It was the White Sox thing that really knocked it out of the park," Cain said.

The story goes like this: Late in the 2005 season, as the White Sox's 15-game lead on the upstart Cleveland Indians dwindled down to 1½ games ("I was probably drinking Jim Beam out of the bottle to cure anxiety attacks," White Sox chief marketing officer Brooks Boyer said), the trio of A.J. Pierzynski, Joe Crede and Aaron Rowand headed out for a night on the town. "There was a cover band that was playing some Journey songs," White Sox spokesman Scott Reifert said. The next day, Pierzynski floated the idea of blasting "Don't Stop Believin'" from the U.S. Cellular Field speakers.

The White Sox ended a seven-game losing streak that night.

The song was played at every home game for the remainder of the season, a stretch that saw the White Sox maintain their division lead, defeat the Red Sox in the American League Division Series, the Angels in the AL Championship Series and the Astros in the World Series to claim their first championship since 1917. The team even invited Perry to Houston as a good-luck charm, allowing him to celebrate on the field after the team completed its sweep.

So, the 1-2 punch of the 2005 White Sox and the finale of "The Sopranos" led "Don't Stop Believin'" back into the public consciousness, cast off its pure pop label and helped it gain legitimacy as something transcendent. Fair enough. But still, why this song?

"It's vague enough to feel like it applies really well to every kind of situation," Richardson said. "'Some will win, some will lose, some are born to sing the blues.' A line like that would work in any situation."

"People ask 'What is it about that song?'" Cain said. "And I have no answer for that. You really can't put it into words."

Any way you want it.

Rick Paulas is a freelance writer based in Los Angeles who has previously written for ESPN The Magazine, McSweeney's and Vice Magazine. He can be contacted through his Web site, rickpaulas.com.