Not appearing in Rumor Central

We present the majors leaguers with the least trade value

As we all wait and maybe hope for a Roy Halladay trade, let's take a pause and generate a list of the anti-Halladays: the players no team would want to trade for.

WHO WILL GET TRADED?

I got to thinking of this list after Dave Cameron posted a list of the 50 players with the most trade value over on fangraphs.com. That list consisted primarily of good, young players signed to team-favorable contracts or players who aren't yet making big money. (His top 10: Evan Longoria, Hanley Ramirez, Justin Upton, Albert Pujols, Matt Wieters, Brian McCann, David Wright, Ryan Braun, Tim Lincecum, Chase Utley.)

Our list, on the other hand, consists primarily of players signed to bloated contracts that make it impossible to foresee their getting traded. Or maybe the player is just really awful.

Anyway, our first annual list of major leaguers with the least trade value (for 2009, we calculated one-third of the player's salary since the season is about two-thirds complete): 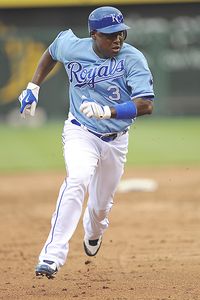 He can't hit, can't field, can't run, doesn't hustle or seem to care at times ... wait, you say the Royals actually just traded for this guy?

Anybody want a 33-year-old catcher with a .299 on-base percentage and little power? Didn't think so. Congratulations, former Mariners general manager Bill Bavasi, you signed the first two guys on our list!

C'mon, we had to get at least one Ned Colletti signing on here.

Lee is a consistent run producer and has surpassed the predicted output of many analysts, but he's paid like one of the game's true elite hitters (which he isn't), making $18.5 million per season. He's kind of like the Jennifer Aniston of hitters: consistent and solid, but he's never going to win you an Academy Award and it's hard to predict when the decline will come.

Helton has had a nice rebound after the first sub-.300 season of his career, but he's nowhere near the player he was when the Rockies signed him to a beast of a $141.5 million contract in 2001. The $16.6 million he'll take home in 2009 represents more than 20 percent of the Rockies' payroll. The deal has only two seasons left (and, yes, Colorado will most definitely take the team buyout after 2011, as Helton would be owed $23 million in 2012), but with his diminished power and health issues, he's untradeable unless the Rockies agreed to pick up a large chunk of his salary. At least he's not a threat to go all Denny Neagle on us. 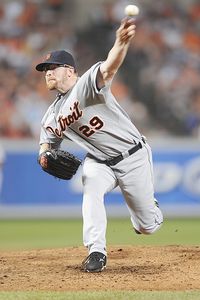 G Fiume/Getty ImagesRobertson led the AL in earned runs allowed in 2008 and is now a $10-million-per-year mopup reliever.

Congratulations, Dave Dombrowski, you've had so many bad signings recently that it's easier just to group them all together (and we considered including Miguel Cabrera, who will earn more than $100 million through 2015, but he's at least young enough to keep producing big numbers).

It's not that he's a bad player, it's just that ... well, he's Aaron Rowand. He's on the wrong side of 30, his one big season came in Philly's bandbox and he's signed for three more seasons. Which probably means the Royals will try to get him this winter.

The first $50 million contract given to a backup outfielder still has two seasons remaining.

Signing a guy like Hafner is kind of like dating Jessica Simpson. He looked pretty good at his peak (he led the AL in OPS in 2006), but there was risk involved: he was thick-bodied, likely to put on weight, turning 30 and one-dimensional in his skill-set, limited to designated hitter duties only. It doesn't take much for that kind of player to go downhill in a hurry. Even though he can still bring his A-game at times, Cleveland is stuck with this contract.

Soriano's career is sort of like a Dickens novel: there were the best of times (his early years, when he put up big numbers, frustrated at times with the flaws in his game, but was a huge positive due to a low salary), there were the worst of times (the current years, when he puts up mediocre numbers, frustrates most of the time with the flaws in his game, and is a bit of an albatross due to his high salary). Soriano will make $18 million a year for five more seasons starting in 2010. He'll be 34 next year. No thank you.

This is no knock on Sabathia's ability or even his girth, but it's difficult to imagine a team willing to take on a pitcher making $23 million per season for another six years. Well, maybe the Mets.

On the bright side, Mariners fans, this contract was so stupefyingly awful, it led to the long-overdue firing that ended the incompetent reign of Bavasi. The deal was for $48 million and Silva has gone 5-18, 6.77 with the Mariners, is on the disabled list and quite likely to have thrown his last major league pitch.

Total left: Approximately $219 million through 2017 (does not include $30 million team marketing agreement)

The "Ishtar" of baseball contracts. On paper, maybe it looked good: the best player in the game, the richest franchise in the game, getting together for a once-in-a-lifetime deal ... but, like the infamous flop that starred Dustin Hoffman and Warren Beatty, it's destined to not return enough on its investment. A-Rod will earn $61 million in the years he turns 40, 41 and 42 -- at which time he'll likely be one very expensive designated hitter, considering the Yanks will have Mark Teixeira at first base. (The idea of a 41-year-old third baseman with a bad hip should bring smiles to AL East fans). The contract is so mammothly outsized even Omar Minaya wouldn't trade for him. And for you Pirates fans hoping to see A-Rod in black and gold someday, he has no-trade protection anyway. 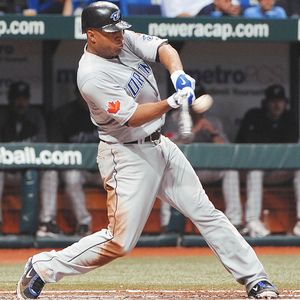 Al Messerschmidt/Getty ImagesWells ranks 79th in the American League in OPS among regulars.

Wells signed his extension following the 2006 season, in which he had hit .303 with 32 home runs. He would be turning 28 years old. Let us attempt to defend J.P. Ricciardi's making Wells one of the highest-paid players in the game:

(1) Wells had been a durable player, playing 154 or more games in four of his five big league seasons.

(3) He was regarded as a top-notch center fielder, having won his third straight Gold Glove.

(4) Umm ... he was well-liked in Toronto, a fixture in the community, was just entering his prime ...

OK, we can't go on any longer. The biggest issue in giving Wells the monster contract was that his on-base percentage was barely league average, even in 2006. He would be unlikely to get better moving forward. He had ranked in the top 10 in the AL in on-base percentage, slugging percentage or OPS just once (eighth in slugging in 2003). Simply put, his offensive production for an outfielder did not come close to justifying the size of the deal.

So now the Jays are saddled with more than $100 million left on a player who has battled injuries, has deteriorated rapidly as a center fielder (the fielding data on fangraphs.com rates him as one of the league's worst outfielders this season) and still doesn't get on base enough. Oh, and is part of the reason the team has to shop Halladay.

Wells can opt out of his contract after 2011. Odds of that happening are slimmer than Prince Fielder's fitting into David Eckstein's uniform.