Round 2 picks: Stars align for Jets?

If you missed the first part of the mega-Round 2 column, click here. And now, the Round 2 picks. Home teams in caps.

Key Player: Kurt Warner. I agreed with the Vegas wise guy who quipped in Chad Millman's column last week, "I wish I could bet [the Cardinals] at the five-minute mark in the first quarter." So true. Warner is like a Vegas blackjack dealer -- you don't know for a couple of hands, but as soon as you know, you know. Can he play two fantastic games in a row?

Possible Playoff Doppleganger: Rams 45, Packers 17 (Jan. 20, 2002). A veteran star QB with an explosive offense takes on a high-scoring team in a dome ... and gets blown out of the building. 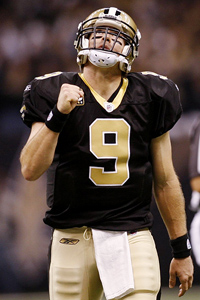 Chris Graythen/Getty ImagesYou want to bet on an Arizona defense stopping a QB who threw for 34 TDs?

Possible Tragic Figure Who Isn't Neil Rackers: If the Saints blow this one as Fox is showing multiple Kim Kardashian luxury box shots, on the heels of the bad luck that Khloe Kardashian has unleashed on the Lakers, doesn't the Curse of the Kardashians officially become a story? And if so, can sister Kourtney dump her preppie, abusive loser of a boyfriend and marry Alex Rodriguez? Thanks.

Relevant E-mail (from Frank in Charlotte): "Fox blew it, they should have put a camera in Brees' house for Az-GB. Brees watching these defenses would've been like Rex Ryan staring down a tray of sticky hot cinnamon buns."

Hero You Might Not Have Expected: Screw it ... Jeremy Shockey. Any time the words "Shockey" and "hero" are in the same sentence, that should qualify.

This Game As a "Jersey Shore" Character: J-Woww. It's definitely going to be easy to score. All types of touchdowns are in play. And much like this game, J-Woww has an over/under of 57.

Theories in Play: Man, I hate relying on home field in 2009, but if it matters at all in football anymore, wouldn't a deafeningly loud crowd in a dome be able to affect an offense that's throwing it 75 percent of the time? Beyond that, I'd like to introduce a new theory for Round 2, tentatively called the "If you were playing at home and gave up 45 points and 400 passing yards in THREE QUARTERS in Round 1, and you're playing on the road in Round 2 against a team that scored 500 points before resting its starters in Week 17, you might be in trouble" theory.

Key Player: Joe Flacco. Never looked comfortable in New England, never had to make a truly big play. You can't expect 5-foot-7 Ray Rice to win every game by himself. Flacco will have to make a big play or five this week. I don't trust him. The Flacco-Manning matchup alone screams, "BANG THE COLTS! BANG THEM!"

Possible Playoff Doppleganger: Doesn't exist. Why? Because we have no idea what to expect from Colts fans in this game. What are the residue effects from the Painter Bowl? Has a fan base ever gotten that angry at its own team with the season still going? Will they slip back into Eff You Mode the moment something goes wrong? I fear a strange, off-putting vibe -- like an Easter dinner four months after a Christmas dinner that deteriorated into a gigantic screaming match between multiple family members. And everyone's sitting at the table on Easter pretending everything is fine, only it's not.

Possible Tragic Figure: Matt Stover versus Billy Cundiff. Flip a coin. I wouldn't want to be one of the uprights in this game. 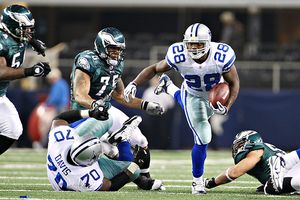 Matthew Emmons/US PresswireFelix Jones, who rushed for 148 yards against the Eagles, adds speed to the Dallas offense.

Hero You Might Not Have Expected: Jim Caldwell! I'm expecting a huge game from him -- I jumped on the over/under of 9.5 blinks.

Relevant E-mail (from me to a friend): "Only Ray Lewis could win a Super Bowl on a team that won its four playoff games by a combined score of 95-23, then claim nine years later that he's playing on the best team of his career because he beat a team in Round 1 that ran every third-down pass play for a rookie seventh-round pick who was converted to receiver from quarterback six months ago."

This Game As a "Jersey Shore" Character: Sammi Sweetheart. At first glance, super attractive. Upon further review, more trouble then it's worth. A stay away.

Theories in Play: The "Beware of teams that looked a little too good in Round 1," "Never bet against Peyton Manning in a night game" and "Never back a shaky QB on the road" theories (advantage, Colts) battling "Beware of weird things happening in Saturday night playoff games," "Beware of the easy two-team teaser" and "Don't worry about home-field advantage with few exceptions" theories (advantage, Ravens). The tiebreaker: "Never pick an underdog if you don't think they can win." Let's not forget that the Colts were 14-0. Thank you.

Key Player: Felix Jones. A frightening wrinkle that the Cowboys didn't start totally tapping until the past few weeks. If they're "Avatar," he's the Imax theater -- just a different experience when you put them together. 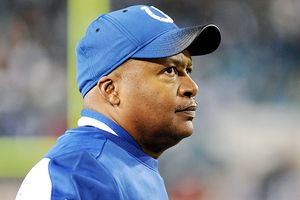 Possible Playoff Doppleganger: Steelers 21, Colts 18 (Jan. 15, 2006). Not just because I'm expecting a tight game with a tragic ending, but because it should be similarly disjointed -- long drives, not a ton of plays, no big chances, lots of third downs, one of those games that sneaks toward the midway point of the fourth quarter as you're thinking, "Wait a second, how are there only eight minutes left?"

Possible Tragic Figure: How can you pick between Brett Favre, Adrian Peterson, Brad Childress, Wade Phillips, Tony Romo, Roy Williams, Marion Barber and Shaun Suisham? Any of them could single-handedly derail this game. Of all of them, Peterson has the most to lose (he's one more big fumble away from being saddled with permanent fumbler stigma) and Childress has the least to lose (short of coming out after halftime without pants, or actually setting a challenge flag on fire and burning it, he couldn't do anything that would shock Vikes fans).

Hero You Might Not Have Expected: Screw it ... Roy Williams!

This Game As a "Jersey Shore" Character: Snooki. Just an ongoing Greek tragedy, but entertaining anyway.

Relevant E-mail (from Damon in Los Angeles): "Isn't it amazing how many similarities there are between both the Favre/Rodgers situation and the Jay/Conan thing? A promise made to Rodgers he'd be given the starting job year after year, and when he finally gets it Brett tries to get it back. Contrived mentor/disciple relationships, broken promises, poor management of the entire situation from the beginning." So basically, if you wager on the Vikes in this game, you're betting on Jay Leno. Yikes.

Relevant E-mail (from our friend Cousin Sal, a Cowboys fan): "Can I pay people -- ANYONE -- to say the Vikings are going to win this game? I'm worried this is Cards/Packers all over again."

Theories in Play: The "Beware of teams that looked a little too good in Round 1" and "Don't overrate home-field advantage in the State of the Art Stadium Era" theories cancel out. There's a chance that 2010 could be The Year of Dallas (Cowboys, Mavs, NBA All-Star Weekend, the new stadium, a rejuvenated Rangers team, etc.) but it's too early to say. The coaching/QB matchups are equally perplexing. The only thing we know for sure? The January '10 Cowboys are better than the November '09 Cowboys, but the January '10 Vikings are worse than the November '09 Vikings. And if that's not enough, I'd rather shave on an airplane than back the Favre-Childress combo in the playoffs. 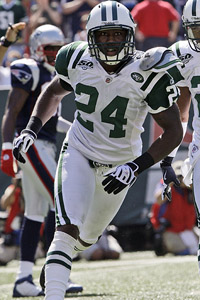 Key Player: Shonn Greene, who last weekend made every Pats fan say, "Wait a second, we had three of the top-60 picks and somehow missed that guy so we could end up with Laurence Maroney again?" You can run the ball down San Diego's throat, and you can run for big plays against San Diego. Greene can do both.

Possible Playoff Doppleganger: Jets 20, Chargers 17 (Jan. 8, 2005). I had the Chargers laying six. Didn't have to look that up. That was "The Night I Forgot That You Should Never Wager On Marty Schottenheimer in a Playoff Game."

Possible "Get Ready For a Weird Game" Omen: Jets owner Woody Johnson recently lost his daughter, Casey Johnson, who reportedly struggled with drug/alcohol problems. Casey Johnson was engaged to Tila Tequila, who accused Chargers linebacker Shawne Merriman of domestic violence when they were dating back in August. Now the Jets and Chargers are playing in Round 2. Any game that features a prominent tie to Tila Tequila HAS to play out strangely, right?

Possible Tragic Figure: LaDainian Tomlinson. Win or lose, I have a feeling we'll be getting a heavy dose of Darren Sproles in this game, along with a lot of Tomlinson sideline shots in which he's sitting sullenly on the bench and looking like his McFarlane action figure.

Hero You Might Not Have Expected: Darrelle Revis. Crap -- you'd totally expect him. I don't care. Shut down Vincent Jackson and you can beat the Bolts.

This Game As a "Jersey Shore" Character: Vinny. He's gaining steam as the season goes long; so are the Jets.

Relevant E-mail (from name withheld): "Hey Cheatriot (expletive) how you like Sanchez now! (EXPLETIVE) YOU. Enjoy watching the Jets while the Cheatriots sit home (EXPLETIVE) each other you (EXPLETIVE). (EXPLETIVE)." Stay classy, Jersey.

Theories in Play: Like with Vikes/Cowboys, the "Beware of teams that looked a little too good in Round 1" and "Don't overrate home-field advantage" theories cancel out. So let's go with the pure matchups: San Diego loves chucking the ball, can't run the ball and can't stop the run. The Jets love running the ball, suck at stopping the run and do a nice job against passing teams. Could they have picked a better Round 2 opponent? The stars have aligned for the J-E-T-S JetsJetsJETS.

(Insert sound of thousands of Jets fans screaming, "Nooooooooooooo! He picked us! KISS OF DEATH!!!!!!!!!" Well, you shouldn't have sent me so many taunting e-mails last weekend. Enjoy the Simmons stink.)

Bill Simmons is a columnist for ESPN.com. For every Simmons column, as well as podcasts, videos and more, check out Sports Guy's World. His new book, "The Book of Basketball," is now available.