Where the sports things are

To collect or not to collect? Bill heads to the National Sports Collectors Convention 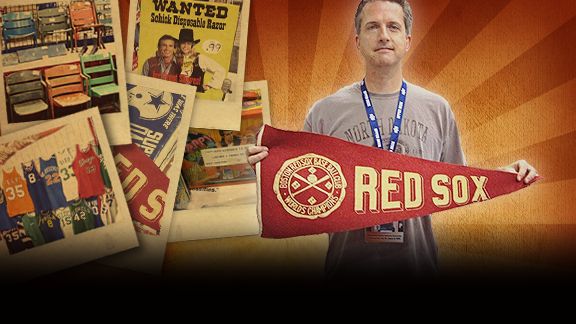 EDITOR'S NOTE: If you want to skip Bill's column about the National Sports Collectors Convention and go straight to the 20-page mega-photo gallery essay, here are the links:

CLEVELAND -- We love to proclaim that things are either overrated or underrated. For instance, I think "Step Brothers" is underrated. I get a kick out of it. I can't stop watching it on cable. Since I didn't expect it to become my favorite rewatchable cable flick of the summer, that means I underrated the movie. But it doesn't mean the movie itself was underrated, you know?

So that's the rub. For something to be truly underrated or overrated, a majority of people had to rate it improperly. Until this past spring, Rajon Rondo was underrated. Right now, Dan Haren is underrated. For NFL fantasy purposes, Steve Slaton is underrated. (At least until everyone starts touting him and he becomes properly rated, and by the way, Slaton is going to have a monster season.) You get the idea. Under that umbrella, I can safely make the following proclamation: Conventions are underrated. Wildly underrated, even.

I'm talking about national conventions where they sell stuff. You know, the best of the best. The ones that fill up entire convention centers. The ones that feature rows and rows of booths. The ones where you walk around for five hours, pass every single seller, nail every square inch and then say to yourself, "Tomorrow, I'm doing the same thing in reverse." For the consumer, they can work in one of three ways: (A) You want to buy things you might not normally see; (B) you want to look at things you might not normally see; or (C) A plus B.

Before last week, I had attended only two conventions in my life. That number is too low. For instance, I can't come up with a single reason I haven't attended the annual car show in Pebble Beach, Calif.; I love cars and love conventions, so naturally, I would love the car convention. But I keep missing it. See, conventions are problematic for any unorganized person who doesn't plan his or her time well. You need to know the dates. You need to know well in advance that you're going. And you need to plan the trip. I don't know what I'm doing two hours from now.

My first two conventions came by accident. Both happened in January 2004, when Jimmy Kimmel's show sent me to Las Vegas for a one-day shoot at a consumer electronics convention. I remember waking up at 4:30 that morning to catch a plane. After that, it gets blurry. I was the assigned writer for a bit featuring Andy Milonakis, a late-20s comedian who looked no older than 12 and tried to shock unknowing subjects with inappropriate language and behavior. The gimmick worked in four-minute bursts; it even worked well for a successful MTV show. But spending six straight hours with him? Not as well. Actually, he made my left cornea explode. That's all I remember, other than glimpsing dozens of new-age plasmas and LCDs.

(Note: I wish I could remember more, but I spent the whole time fretting that we would be returning to Los Angeles with the single worst piece of comedy that had ever been filmed. Somehow, it turned into a half-decent piece. Why? Because of the Adam Carolla Rule, which goes like this: For every hour that you film someone trying to be funny, you will get one minute of usable comedy. This goes for home movies, wedding videos, college videos, segments for late-night shows and whatever else. This also explains why pro athletes are never funny when they shoot comedy segments; they never give anyone more than an hour, which means you get one minute of comedy stretched into a four-minute piece. Anyway, if I had been confident in this rule while spending that brutal day with Milonakis, I'd remember more about the day other than thinking over and over, "I'm going to get fired.")

I hadn't enjoyed a full-fledged, unencumbered convention experience until last week. Like always, I didn't plan it. Two weeks ago, a buddy casually mentioned that he was heading to the National Sports Collectors Convention in Cleveland. I collect sports-related things from time to time. It comes in waves. Loved it through 10th grade in high school. Fell out. Loved it again in college. Fell out. Got roped in again during the eBay boom in the late '90s. Fell out.

Lately, I have been dabbling again. It started as I was researching a small piece about NBA cards for my basketball book; the simplicity of that market got my juices flowing a little. From 1946 to 1970, only four mainstream sets were made: Bowman (1948), Topps (1957), Fleer (1961) and Topps (1969). That's it. A relatively new "official grading system" makes it easier to target cards depending on your price range. If you want, you can collect every rookie card for the first 25 years of the NBA in a scant four sets.

Would this be prohibitively expensive? If you were collecting cards in good shape, yes. Ridiculously so. If you were collecting beaten-up cards just to say, "Yeah, I have a '57 Bob Cousy"? Much easier. (Especially in this economy, with so many people unloading stuff.) After those four aforementioned sets, only three others stand out: '76 Topps (a tall-boy set of oversized cards that deserves its own column at some point); '80 Topps (the "three guys to a card" set that featured Larry Bird and Magic Johnson on the same rookie card, only every kid stupidly ripped those cards into threes, and yes, I include myself); and '86 Fleer (the first set in four years, so it's loaded with Hall of Fame rookies, including the MJ card). After that, everyone started overproducing cards, and it turned into a collecting quagmire. But you could cherry-pick the best cards from those seven sets, then purchase the rookies for Pete Maravich ('71 Topps) and Julius Erving ('72 Topps), and own nearly every relevant Hall of Famer for the first 40-plus years of the league for less than you'd think. I think this is relatively amazing.

Intrigued, I started doing some digging. What were some of the other basketball cards out there from 1946 to 1986? There had to be some oddball stuff, right? I learned about Topps' test-issue set in 1968 (22 cards in all, only a few dozen made, big-big-big bucks); the Sugar Daddy cards from 1975; the Topps "rulers" from 1970; Star's baggy sets from 1983 to 1985 (which I knew about but blocked out of my mind because I would have collected them as a kid if I knew about them, which I didn't); and how difficult it was to find unopened, sealed boxes of Topps cards from the '70s and '80s. Did I want to start quietly collecting any of these things or investigate how much it would cost to dip my toes in these waters? I made the mistake of asking my wife this question. We had the following exchange:

Her: "I have a serious question for you."

Her: "Are you trying to get me to divorce you? Because this is the expensive route. If I were you, I'd just cheat with a cocktail waitress or some wannabe actress and leave her underwear in our bed. Much cheaper, same result."

Point taken. I called an audible and decided on something more reasonable: If I dabbled, I would dabble in oddball stuff from the mid-'70s through the early '80s only. That's the stretch when my dad started carrying me into the Boston Garden. That's when I started collecting cards. That's when the ABA and the merger and Doc and Walton and Cowens and Ice and the dunk contest and H-O-R-S-E and early Bernard and the Skyhook and Thompson and big frightening Afros happened. That's when guys started snorting coke the same way you and I drink coffee. That's when "Fast Break" and "The Fish That Saved Pittsburgh" and "The White Shadow" happened. That's when the uniforms were coolest. That's when Converse and Nike made the best posters. That's when David Halberstam started working on "The Breaks of the Game." That's when CBS started tape-delaying playoff games, Kermit nearly killed Rudy T., Kareem broke Benson's jaw and people unfairly complained the league was too black. That's when Bird and Magic showed up and saved the day. That's when the league became what it is now, for better and worse. The seeds were planted from 1974 to 1983.

I explained my plan to turn my office into an homage to this era. My wife liked the idea, although her reasons were different than mine: "Now you can keep all your crap in one place."

And that's the thing about collecting. The word means two different things. You are collecting things, but the stuff also collects in your house. This is a fundamental problem for any relationship and a nice way of demonstrating one of the main differences between men and women. Guys collect to surround themselves with things that are important to them. Enter my house, and you will have a pretty good idea about what I like. You will see hundreds and hundreds of books. You will see tons of basketball stuff and Boston stuff. You will see some of the most elaborate auto-asphyxiation equipment ever assembled. (Just kidding.) But you could peruse my stuff for 15 minutes and get the hang of me.

Women don't operate this way. I have never been over to someone's house and had a woman say, "Come into the den -- I want to show you my rare collection of Beatles albums" or "It just so happens that I'm an avid Meryl Streep collector." The vast majority would rather spend that money on clothes and shoes. Sorry, it's true. I think women are smarter than men in that respect. Ultimately, collecting just collects. Eventually, it ends up in an attic or a basement. It just does.

Did that stop me from embarking on "Operation 1970s Hoops Office"? Of course not.

Did I fly to Cleveland for last week's National Sports Collectors Convention? Of course I did. I was there for 27 hours. I had 10 hours spread over two days to see everything I could possibly see. I somehow managed to plow through all 22 rows, twice. I stayed focused on my three goals for the trip (finding basketball stuff for my office, finding stuff for my son's room, taking as many pictures as possible), and tried to keep moving and not get bogged down. I also tried to avoid the baseball stuff -- and there was a ton of it -- as much as I could. All the baseball stuff, the Cracker Jack cards, the 1950s Topps stuff, the uncut sheets ... I just kept walking. Blocked it out. Tunnel vision, baby. Next year in Baltimore, I will dive into that stuff. This year? I concentrated on basketball, jerseys and oddball stuff only.

As for the macro version, maybe this 120-photo essay will give you an idea of why you need to go. Enjoy.

Bill Simmons is a columnist for ESPN.com. For every Simmons column, as well as podcasts, videos, favorite links and more, check out the Sports Guy's World.