'The Book of Basketball' 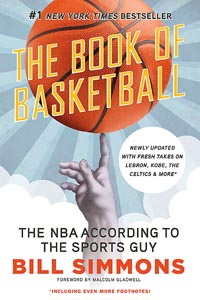 ESPN"The Book of Basketball" comes out in paperback with new updates and a revised Hall of Fame pyramid.

You can order the paperback from Random House, Amazon.com, Barnesandnoble.com, Borders or other retailers.

What if Portland had taken Kevin Durant over Greg Oden?

Here's what we knew about Oden heading into the 2007 Draft: owned Ewing-like potential as a rebounder and shotblocker … struggled with a broken wrist during his freshman year at Ohio State … only played one "Wow!" game (the '07 NCAA Championship: 25 points, 12 rebounds, 4 blocks in defeat against Florida's Joakim Noah and Al Horford) … his right leg was one inch longer than his left leg (a red flag for potential knee/feet/back issues) … openly admitted that he didn't love basketball and once wanted to become a dentist … frightened everyone in Portland with a jittery pre-draft workout … looked and walked like a thirty-six-year-old man.

Meanwhile, Durant lived and breathed basketball, became a national phenomenon during his only Texas season, crushed his Portland workout and had no conceivable offensive ceiling. Throw in Portland's tortured history with fragile centers and, as the years pass, it's becoming harder to fathom that the Blazers willingly decided, "Screw the sure thing, let's take the big guy with uneven legs who played one great college game." But that's what they did. Because we love revising history over time, owner Paul Allen and then-general manager Kevin Pritchard have been protected by the "Come on, anyone would have taken Oden, you always take a franchise center, it's not their fault he keeps getting injured" defense. That presumes Oden was considered a sure thing -- like Kareem, Ewing or Hakeem -- and ignores those six months everyone spent wondering about him before the 2007 Draft. Like me, Boston GM Danny Ainge liked Durant as the top pick for one reason: Durant was the sure thing, not Oden. If you followed Durant in college (and Ainge fell head over heels for him, as did I), you knew about his work ethic, leadership, character and scoring DNA. I thought Durant was a genetic freak: like Tracy McGrady crossed with Plastic Man, someone God created to make baskets and get to the line. Oden left you hoping he stayed healthy, hoping basketball would become more important to him, hoping his spotty college year wasn't an aberration, hoping he developed a low-post game and a killer instinct … for a sure thing, you sure were doing a lot of hoping. How was that any different than the Bowie/Jordan dilemma 23 years earlier? When Durant became the youngest scoring champ ever and placed second in the 2010 MVP balloting -- as Oden recovered from his second season-ending knee injury, no less -- Portland's decision barreled into the "What If" chapter six years earlier than expected.

So what if the Blazers picked Durant instead of Oden? They become the fledgling Western Conference juggernaut of the 2010s (not Oklahoma City); Portland becomes a legitimate 2010 destination for LeBron; any successfully unconventional decision would be called "a Pritchard"; and everyone in Portland would be so perpetually happy that it would never rain there again. Instead, we have to start bracing for the 2029 or 2030 Draft, when Portland wins another lottery and finds itself stressing between Sure Thing Potential Superstar Scorer X over Possibly Fragile Franchise Center X as everyone else wonders, "Wait a second, we're doing this again?" One of these generations, the Blazers will get it right.