Yeah, right -- it's not over? Jimmie Johnson needs to finish 25th or better in Miami on Sunday to win his fourth straight Sprint Cup title.

Come on, it's so over. Johnson could finish 25th driving blindfolded and steering with his feet.

All that's really left of NASCAR's 2009 season is handing out the postseason awards.

Page 2 gives out the trophies that really matter. 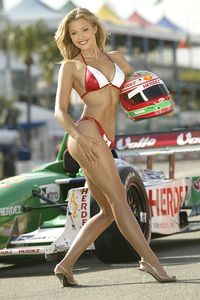 BEST NASCAR WIFE/GIRLFRIEND
Eva Busch, Kurt's wife, made a strong push this year. Jeff Gordon's wife, Ingrid Vandebosch, almost regained the title. January Jones was at the Kansas Cup race and supposedly clicked with Tony Stewart. Our winner, though, is Lynne "Kush" Kushnirenko. Sure, her husband, AJ Allmendinger, had a rough year -- no wins on the track, and a DUI off it. But he still gets to go home to a former Miss Molson and Playboy Cyber Girl.

WORST NASCAR WIFE /GIRLFRIEND
Ashley Judd, because she left the sport. Yes, her husband, Dario Franchitti, went back to IndyCar. But that was no reason for her to go with him!

UN-FUNNIEST CAR SPONSOR
When you watch the Ford 300 on ESPN this weekend, root for the cars backed by Citi Financial and BB&T. Both got federal money in the financial industry bailouts -- so technically, both are sponsored by us taxpayers. Presumably, we get champagne if one of them wins.

BEST OLD GUY
Mark Martin, duh. He's old enough to join the AARP but was the only driver who even challenged Johnson in the Chase. Sure, it's cool that Tom Watson can hit a fairway at age 59. But Martin, only nine years younger, hits 200 mph every week in a pack of 43 bumping and banging race cars. 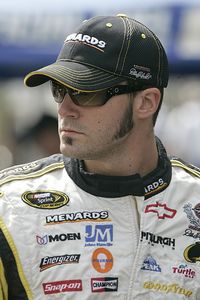 BEST FACIAL HAIR
Sam Hornish clearly spends several hours per day on sideburn maintenance. Martin Truex is obsessed with Elvis and looks the part. But we'll go with Dale Earnhardt Jr. -- mostly because of his supernatural ability to always have a roguish, three-day stubble. Just another reason that Junior is NASCAR's biggest star. He really is like Elvis. Except, you know, without all the success.

WORST FACIAL HAIR
Paul Menard and his ever-changing topiary of goatees, soul patches and Martin Van Buren-esque muttonchops. If only he drove as well as he groomed.

BEST DRIVER NAME
Scott Speed. He didn't do much in his No. 84 Red Bull car. Whatever. His name is Scott Speed. If he weren't a driver, he could have his own cartoon.

BEST FINISH
Leading on the last lap of the Aaron's 499 at Talladega, Carl Edwards was hit, spun, flipped upside-down, bounced off the Turn 4 catch-fence and rolled to a stop, his car a spectacular, smoking mess. Edwards then crawled from the wreck and jogged Ricky-Bobby-style across the finish line for the greatest 24th-place finish in the history of motorsports. (Oh yeah, Brad Keselowski won the race.)

BEST RACE NAME
Darlington called their race the Southern 500 -- a simple, classic title that harkens back to the sport's cherished roots.

BEST PAINT JOB
The No. 26 Crown Royal Ford. Granted, the jeweled crown on a velvet pillow doesn't inspire fear. But with Jack Daniel's and Jim Beam dropping sponsorships in 2010, Crown is the only whiskey sponsor left in a sport founded by moonshiners.

WORST PAINT JOB
Juan Pablo Montoya not only helped Bob Griese learn the difference between Mexico and Colombia, but he also shocked NASCAR by making the Chase. He also shocked retinas with the abomination that appeared on the No. 42 Dodge at Texas for the Hispanic Heritage Month "Dream in Color" campaign. Who says green, red, orange, black and yellow clash? Pretty much everyone with eyes. 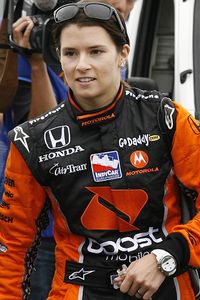 AP Photo/Shuji KajiyamaThe constant speculation about Danica does get a little tiresome, doesn't it?

BEST OFF-TRACK SOAP OPERA
In May, after what NASCAR alleged was a positive test for methamphetamine, driver Jeremy Mayfield was indefinitely suspended. Mayfield hired lawyers and got a judge to un-suspend him. Two weeks later, though, he allegedly failed a second drug test and was un-un-suspended. A few weeks after that, Mayfield's stepmother Lisa, who had testified that she saw the driver use meth dozens of times, was herself arrested for misdemeanor assault and trespassing. She was on … wait for it … Jeremy Mayfield's property. You can't get that kind of gritty, real-life drama anywhere else (besides "The Jerry Springer Show").

WORST OFF-TRACK SOAP OPERA
It is possible that, at some point in the future -- taking into account her IndyCar schedule, her various contractual obligations and certain astrological signs -- Danica Patrick could conceivably drive a stock car in some form of NASCAR-sanctioned event.

BEST VICTORY CELEBRATION
Did you see the video of Dale Earnhardt Jr. doing his 2009 post-victory burnout? (Well, it was actually computer-generated video from EA Sports' "NASCAR 09." Junior didn't get a burnout in real life this year.)

WORST VICTORY CELEBRATION
After winning in Nashville, Kyle Busch was presented with the traditional trophy, a custom-made, hand-painted Gibson Les Paul -- which he promptly destroyed, Pete Townsend-style, on live TV.

"There ought to be a law with no bail
Smash a guitar and you go to jail
With no chance for early parole
You don't get out 'til you get some soul."

Hampton Stevens is a contributor to Page 2 and ESPN The Magazine. He also has written for Playboy.com, Maxim, Atlantic Online, the Kansas City Star and many more publications. He lives in Kansas City, Mo., with his girlfriend and two dogs.

Page 2
Hampton Stevens is a contributor to Page 2 and ESPN The Magazine. He also has written for Playboy.com, Maxim, Atlantic Online, the Kansas City Star and many more publications. He lives in Kansas City, Mo., with his girlfriend and two dogs.