A look at the original rules of basketball

By Hampton Stevens | Special to Page 2

On this date in 1892, Dr. James Naismith first published the rules to a new game he called "basket ball." The game was a little different back then. The baskets, for instance, were actual baskets -- wooden peach baskets nailed to a gymnasium wall. The original rules also called for nine players on a side and a jump ball after every score. Page 2 looks at Dr. Naismith's original 13 Rules of Basketball to see what else has changed. 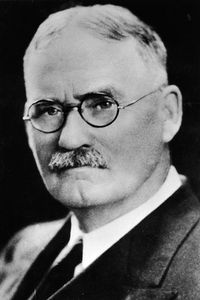 Hulton Archive/Getty ImagesDr. James Naismith, the man who came up with the game of basketball.

1. The ball may be thrown in any direction with one or both hands.

Naismith was using a soccer ball. The idea that you could pick up and throw the thing must have been a stunner.

2. The ball may be batted in any direction with one or both hands (never with the fist).

We get it -- you can use your hands. Honestly, these first two rules probably could have been combined.

3. A player cannot run with the ball. The player must throw it from the spot on which he catches it, allowance to be made for a man who catches the ball when running at a good speed if he tries to stop.

However, if you are planning to dunk and have a superstar reputation, you can take a step or two. Sometimes three.

4. The ball must be held in or between the hands; the arms or body must not be used for holding it.

And a few years later, they came up with this thing called "dribbling." Really sped things up.

5. No shouldering, holding, pushing, tripping, or striking in any way the person of an opponent shall be allowed; the first infringement of this rule by any player shall count as a foul, the second shall disqualify him until the next goal is made, or, if there was evident intent to injure the person, for the whole of the game, no substitute allowed.

In other words, the Pat Riley-coached Knicks teams of the 1990s would never have made the playoffs.

6. A foul is striking at the ball with the fist, violation of Rules 3, 4, and such as described in Rule 5.

We are not sure what makes this rule different from No. 2, but Dr. Naismith seemed to think spiking was going to be a huge issue. Maybe he should have added something about not bringing your guns to the locker room.

Later, they came up with free throws. In retrospect, "three straight fouls is a point" may not have been such a bad idea. It sure would be more fun than watching the parade to the free-throw line that mars the end of so many otherwise-exciting games.

8. A goal shall be made when the ball is thrown or batted from the grounds into the basket and stays there, providing those defending the goal do not touch or disturb the goal. If the ball rests on the edges, and the opponent moves the basket, it shall count as a goal.

In other words, no goaltending. Side note: When the first game of basketball was played, a step-ladder was kept next to the basket. Someone had to climb up and get the ball after every score. Even that first day, you'd think someone would have figured out to cut a hole in the bottom.

Teams did, in fact, "persist in delaying the game," so much so they had to invent the shot clock.

10. The umpire shall be judge of the men and shall note the fouls and notify the referee when three consecutive fouls have been made. He shall have power to disqualify men according to Rule 5.

11. The referee shall be judge of the ball and shall decide when the ball is in play, in bounds, to which side it belongs, and shall keep the time. He shall decide when a goal has been made, and keep account of the goals with any other duties that are usually performed by a referee.

And both the umpire and the referee should probably make a point of avoiding gambling on the games they work.

12. The time shall be two 15-minute halves, with five minutes' rest between.

With a few extra hours thrown in for TV timeouts.

13. The side making the most goals in that time shall be declared the winner. In case of a draw, the game may, by agreement of the captains, be continued until another goal is made.

Hampton Stevens is a contributor to Page 2 and ESPN The Magazine. He also has written for Playboy.com, Maxim, Atlantic Online, the Kansas City Star and many more publications. He lives in Kansas City, Mo., with his girlfriend and two dogs.

Page 2
Hampton Stevens is a contributor to Page 2 and ESPN The Magazine. He also has written for Playboy.com, Maxim, Atlantic Online, the Kansas City Star and many more publications. He lives in Kansas City, Mo., with his girlfriend and two dogs.