Yes, Dukies know how to party

By Matthew Iles | Special to Page 2

I never went to a tailgate in college. Not a real one, anyway.

Sad, maybe, but I guess I'll never know what I was missing. Throwing on a jersey … grilling in the parking lot … tossing the pigskin … and then eventually heading inside and cheering on your team.

In the beginning, there was football. It's always been about football. Tailgating's just like the free bread before dinner -- tasty, but not what you came for.

And that's what I missed at Duke: football.

Duke's football team was so bad while I was there, I sometimes thought I had been sucked into a college football Twilight Zone. I swear, in one game Duke committed five fumbles on the quarterback-center exchange. Five!

All you could do was laugh.

And, of course, choose not to go to the game in the first place.

Which, over time, is exactly what evolved at Duke; there was simply no incentive to ditch the party and cheer in the face of a certain blowout.

So imagine tailgating without caring about the game. What would fill the vacuum?

How about dance parties, beer showers and Halloween costumes?

Allow me to share some scenes from my years there: 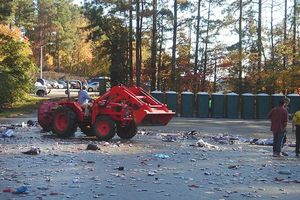 • Chugging a beer through a dirty traffic cone.

• Four dudes dressed as ninja turtles; "Raphael" stabbing his dagger into a beer can in order to shotgun it. (Disclaimer: If you don't know what shotgunning a beer is, consider yourself warned/healthy.)

• The song "Twist and Shout" inciting hundreds of people to dance, sing and throw beer as far and as high as the eye can see.

• A guy handing out beers from the back of a pickup truck while wearing an eye patch and enormous fake breasts and holding a plastic trident.

How the school allows it to persist, I'll never know. Of course, that's not to say they haven't tried to stop it. In fact, they've tried just about everything. But ultimately, it's like the debate regarding teen sex-ed classes. Hand out protection -- in this case, free food and water bottles, on-site EMT officers and dozens of port-o-johns. Or don't -- preach abstinence, and potentially drive an already risky situation further underground. In other words, kids will still do it, just more dangerously.

The debate can make your head hurt. And, as we all learned in college, the best way to soothe a headache … drink another beer.

The mere suggestion that Duke students know how to have a good time may seem preposterous. Even if every student described tailgate as unrivaled and glorious debauchery -- and they all do -- people would still say it's just rich-kid talk for "We're having fun, promise!"

Alas, it's so trendy to hate on Duke.

But, no matter. You keep your civilized and purpose-driven tailgates. We're just fine with our health-hazardous eyesore of a Masquerade Booze Ball.