Fans can wear throwback unis, too

Midway through the season, it seems the NFL is more throwback-happy than ever before. Each team seems to show a different look every week -- the games now resemble very violent costume parties. Nevertheless, everyone seems to enjoy these uniforms, despite the fact that at first glance, many teams are harder to identify than a "24" villain. 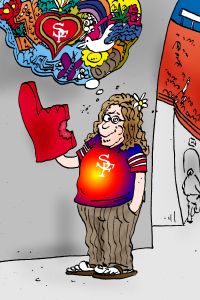 But why should it stop with the players? Why should they be the only ones who get to imitate the past? As long as this throwback craze is at its peak, fans should get in on the action as well. We here at Page 2 think there should be a Fan Throwback Day, when the crowds of the home teams come dressed like fans from a former era in their city's history. Here are a few examples of what people might wear to the games on this specially organized day.

Description: Is any widespread movement as associated with one city as hippies are with San Francisco? Celebrate that heritage by sewing a 49ers patch onto an old tie-dyed Grateful Dead T-shirt, tossing on some bell bottoms and foregoing all bathing the week leading up to the game.

Accessories: Flowers in your hair, song in your heart, THC in your blood.

Description: The upstart Jets seem like a better fit for the Studio 54 mentality than the stodgy old Giants. So break out the polyester pants, leisure suits (preferably green and white) or as much velour as you can stomach, and head out to the Meadowlands to support Swingin' Mark Sanchez, the heir apparent to Broadway Joe Namath. Just make sure to remember the platform shoes. You'll need them to see over the Afro wigs. 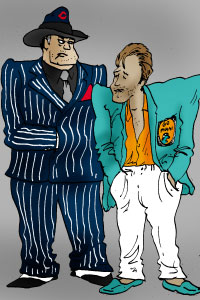 Description: Pay tribute to the 1921 founding of the Bears by putting on your best pinstripe suit, Dillinger hat and diamond-encrusted Bears-logo watch. If you really want to get into the spirit, sneak in a 12-pack and undercut the beer vendors on price. If anyone objects, a light kneecapping should solve the problem.

Description: The 1980s were a pop-culture bonanza down in Miami. Fans can celebrate these glory days by donning white suits and choosing between a "Miami Vice" pastel T-shirt or a black button-down shirt with an open collar, straight from the Tony Montana collection. If you go with the Don Johnson look, we suggest trying to obtain a "Miami Device," a razor built specifically to replicate the star's stubble level. These actually exist. The '80s were ridiculous.

Description: Seriously, are there eras in Buffalo? Primarily because it's so cold, it seems like nothing ever changes there. If there were some sort of massive global catastrophe and all of North America slid south of the equator (coming soon in a Roland Emmerich movie near you!), I still would pack a parka if I had to visit Buffalo during football season. Not that this is a bad thing -- the Bills' fans are extremely dedicated and hearty -- but it does make any sort of throwback night seem kind of … redundant. 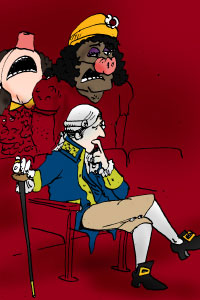 Description: There once was a time when Washington fans didn't head to Redskins games with as much excitement as a young kid approaching the blackboard after he just soiled his pants. They loved their team, coach and owner, and proudly wore as much burgundy and gold as their bodies could support. It feels so long ago, you would think the fans also wore knickers and powdered wigs -- but it wasn't. Their supporters deserve to return to these times, if only for a day.

Description: Although the Giants hadn't been founded quite yet, New Yorkers did attend sporting events such as boxing bouts during this period, and this fan throwback day represents an excellent opportunity to replicate the clothes seen in "Gangs of New York." The outlandish pants, the knee-length heavy coats, the stovepipe hats … Giants fans could give their team a real home-field advantage. Forget the Dawg Pound or Black Hole -- how could opposing players focus with these guys screaming at them?

Description: There are two problems with bringing back the grunge era for a football game. One, Seattle fans will need plenty of advance notice before the throwback day is scheduled. They need to search the Pacific Northwest to find the perfect thrift store and visit a salon to make sure their hair is just the right level of messy. Otherwise, when they spend all afternoon talking about how they don't care what they look like, who will believe them? Second, it would ruin the atmosphere of the game. Grungers don't clap to show excitement (unless they are doing it ironically). Instead, they yawn to feign indifference, and 70,000 people yawning have never disrupted a snap count. Although a stadium-wide mosh pit might do the trick. 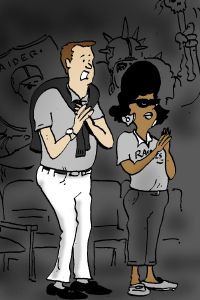 Accessories: Flannel shirt, torn jeans, as much angst as you can muster.

Description: Once upon a time, fans from a diverse, working-class city came to their team's games and cheered on the home squad without makeup, spiked shoulder pads or a jacked-up testosterone level that would kill a male elk. It was back in the long-long ago, before Raiders games resembled auditions for "America's Most Wanted." Maybe for just one Sunday, while other team's fans are playing dress-up, Oakland fans could pretend to be normal.