The apex of the World Football League

By John Zoni | Special to Page 2 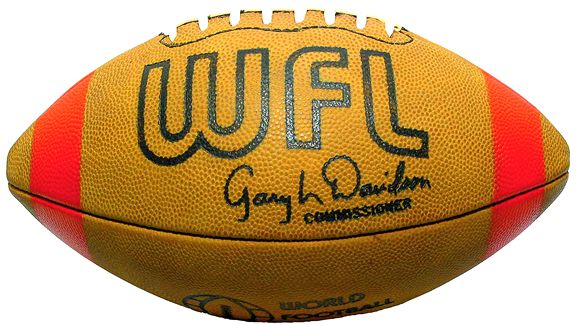 If you're interested in upstart football leagues, you've likely been enjoying this fall. The original AFL teams are celebrating their 50th seasons of existence by wearing throwback uniforms, the new United Football League played its debut season and ESPN's "30 for 30" documentary series featured a look at the dearly departed USFL. But this year also represents an anniversary for another renegade league which has been largely forgotten.

Thirty-five years ago this week, the World Football League played its only championship game, the World Bowl (not to be confused with the moniker later employed by NFL Europe for its title game).

That the WFL was even able to stage a title game at the end of its 1974 season was surprising given the league's many travails. The brainchild of Gary Davidson, who also had a hand in founding the ABA and the World Hockey Association, the WFL featured a quirky football (gold with orange stripes) and some quirky rules (for instance, touchdowns were worth seven points, with a run-or-pass "action point" after a touchdown). Twelve teams took the field for the 1974 season, and early WFL attendance numbers seemed good until it was revealed that some teams (most notably the Philadelphia Bell) were providing many free or discounted tickets. Soon after that, the WFL started losing fans and money rapidly. Two WFL teams moved during the season -- the New York Stars became the Charlotte Hornets and the Houston Texans became the Shreveport Steamer. Two others, the Detroit Wheels and Jacksonville Sharks, folded. Jacksonville's departure forced a relocation of the World Bowl since it was originally scheduled to play host to the title game. 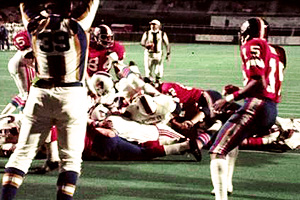 wfl1974.comBirmingham's Joe Profit plunges into the end zone for the first touchdown of the 1974 World Bowl.

The start of the playoffs brought more chaos. The Hornets, the second-place team in the Eastern Division, earned the right to host a playoff game. But due to poor ticket sales, the Hornets dropped out of the postseason entirely, allowing the third-place Bell to take their playoff spot.

On Dec. 5, 1974, at half-empty Legion Field in Birmingham, Ala., the World Bowl matched the Birmingham Americans and the Florida Blazers, who were based in Orlando, Fla. Neither team's players had been paid in weeks, and the Americans walked out of practice leading up to the game. They were eventually coaxed back when ownership promised them championship rings.

Ironically, after a regular season which led to millions of dollars in losses, the World Bowl's first touchdown was scored by Birmingham running back Joe Profit, on a 1-yard run in the second quarter. Two more touchdowns and an "action point" staked the Americans to a 22-0 lead through three quarters. Florida staged a fourth-quarter rally led by quarterback Bob Davis and running back Tommy Reamon, but Birmingham held on for a 22-21 victory and the WFL title.

Even in victory, the Americans lost -- their uniforms, that is. They were repossessed shortly after the game to help pay off the team's debts.

Somehow, the WFL came back for a second season in 1975, but didn't survive long enough to hold a second World Bowl. Financial troubles finally forced the WFL to shut down for good in October 1975, just past the midway point of the season.

Familiar faces of the WFL

The World Football League itself is long gone, but it did feature some notable participants:

• Larry Csonka: The Pro Football Hall of Famer and Super Bowl VIII MVP was one of three Miami Dolphins (along with Jim Kiick and Paul Warfield) to jump to the WFL's Memphis Southmen for the 1975 season. Csonka rushed for 421 yards before the league folded. 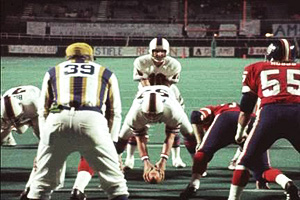 wfl1974.com Birmingham quarterback George Mira lines up during the World Bowl. He was later named the game MVP.

• Danny White: The future Dallas Cowboys quarterback and punter threw for 2,635 yards and 22 touchdowns in two seasons with Memphis. White was also leading the WFL in punting average (45.1 yards per attempt) when the league folded in '75.

• Vince Papale: The subject of the movie "Invincible" had some pro football experience prior to his NFL days with the Eagles, playing for the Philadelphia Bell in 1974 and '75.

• Jim Fassel: The former coach of the New York Giants and current coach of the UFL champion Las Vegas Locomotives was a backup quarterback in the WFL for two seasons with the Honolulu franchise, which was simply named the Hawaiians.

• Jack Pardee: Before NFL head-coaching stints with the Bears, Redskins and Oilers, Pardee guided the Florida Blazers to the '74 World Bowl.

• Daryle Lamonica: The "Mad Bomber" ended his career with the Sun after a long tenure with the Oakland Raiders.

• Anthony Davis: The former USC All-American was the WFL's leading rusher in the abbreviated '75 season with 1,200 yards and 16 touchdowns for the Sun.

• John Matuszak: The late former Houston Oiler and Oakland Raider tried to jump to the WFL's Houston Texans while still under contract to the Oilers in '74. He played part of one game against the New York Stars in Week 8 before being served with a restraining order on the sideline during the game.

• Mike Patrick: The ESPN college football and basketball broadcaster was the play-by-play voice of the Jacksonville Sharks.

The name remains the same

A few WFL franchise names have since been used by teams in other sports:

• Houston Texans: The WFL's version lasted less than one season before moving to Shreveport; the NFL's version is now in its eighth season.

• Charlotte Hornets: This moniker predates both the WFL and NBA teams that used it. Charlotte had a minor league baseball team called the Hornets for more than 70 years.

• Chicago Fire: The Great Fire of 1871 was the inspiration for the name of the Windy City's WFL team in '74 and its current MLS team 23 years later.

• New York Stars: Four years after serving as the name of the Big Apple's short-tenured WFL team, Stars became the name of the city's franchise in another short-lived venture, the Women's Professional Basketball League, for two seasons (1978-80).

• Jacksonville Sharks: The original WFL Sharks lasted only 14 games before folding during the '74 season. A new Jacksonville Sharks team is set to take the field in the new Arena Football 1 league slated to begin play next spring.

Birmingham's Legion Field has been dubbed the "Football Capital of the South" and played host to the Iron Bowl between Alabama and Auburn for many years. Although the Denver Broncos considered a move to Birmingham in the 1960s, the NFL never did move there. But many other pro football leagues have set up shop at Legion Field:

• Birmingham Fire (WLAF, 1991-92): Before the World League of American Football became the overseas-only NFL Europe, the Fire called Birmingham home for two seasons, going a combined 12-7-1 in the regular season and losing in the first round of the playoffs both years.

• Birmingham Barracudas (CFL, 1995): Birmingham was one of the cities the Canadian Football League picked during its ill-fated U.S. expansion in the mid-'90s. The Barracudas went 10-8 in their only season, losing in the playoffs to the San Antonio Texans 52-9. Also of note, current ESPN BCS analyst Brad Edwards worked in media relations for the Barracudas.

• Birmingham Thunderbolts (XFL, 2001): Wrestling impresario Vince McMahon's XFL found its way to Birmingham for its lone season of play. The Bolts ended up with the XFL's worst record at 2-8.

John Zoni is a researcher for ESPN Stats & Information.