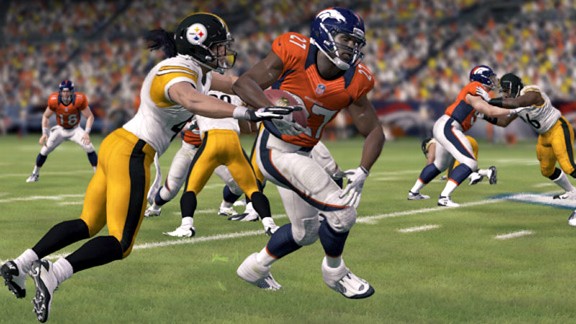 Player of the Game: Peyton Manning

It took one game to see that old Manning magic back in action, as Peyton threw two fourth-quarter touchdowns to help the Broncos comeback and beat the Steelers 27-24.

Manning completed 22 of 31 passes, saving his best moments for last thanks to an early 10-3 deficit the Broncos found themselves in. Thanks to clutch catches by Eric Decker, Demaryius Thomas and Chris Gronkowski, Manning was able to find his groove in the second half, lighting up the Steelers secondary for the thrilling win.

ESPN.com has teamed up with EA Sports to simulate every week of the NFL regular season, including exclusive screen shots and stats. Check out "Madden NFL 13" today on Xbox 360, PS3 and Vita.