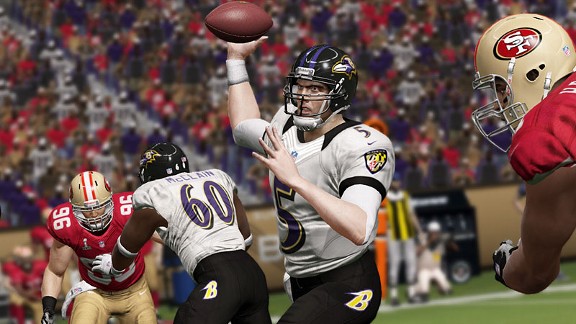 Player of the Game: Joe Flacco

In one of the wildest Super Bowl simulations the "Madden" team has ever produced, the Baltimore Ravens jump out to 24-10 lead to end the third quarter, then watch as their defense collapses, enabling the 49ers to comeback and tie the game late. Colin Kaepernick plays brilliantly, throwing for 257 yards, rushing for another 48, and throwing a key touchdown pass to Vernon Davis with just over two minutes remaining to tie the game at 24. But that's when Joe Flacco and crew strike back, driving down field in their two-minute offense, setting rookie kicker Justin Tucker up for the go-ahead 40-yard field goal with only 50 seconds remaining on the clock. Tucker splits the uprights and it looks like the Ravens have everything wrapped up, but Kaepernick leads his team down the field in speedy fashion, launching the ball into the end zone for what looks like the game-winning touchdown, until Ed Reed swoops in from out of nowhere to intercept the ball and seal the three-point Baltimore victory. In other words: John 1, Jim 0.

ESPN.com has teamed up with EA Sports to simulate every week of the NFL regular season, including exclusive screen shots and stats. Check out "Madden NFL 13" today on Xbox 360, PS3 and Vita.