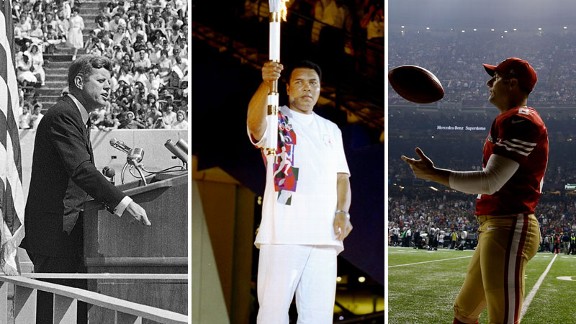 Our sports stadiums have hosted near-religious experiences -- e.g., the Immaculate Reception -- as well as actual religious events, such as the three papal masses at Yankee Stadium. Now it's time for us to celebrate the latter type, ranking the most significant noncompetition moments at North American sports venues.

What is noncompetition? Basically: Roy Halladay's many strikes in his 2010 playoff no-hitter are not eligible. President George W. Bush's single, inspiring strike at the 2001 World Series is. (More on the rules here.)

It's finally settled. We know where the wave first started. In Oakland ... and Seattle.
Doug Williams »

The Next 10
Best Moments

Not every moment can be in the top 50, of course. Here are the honorable mentions that didn't make the cut. Caple/Dorsey »

What are the 10 most historic North American stadiums still in use? Paul Donaldson »

A Look Into
The Future

What's the future of stadiums? Food delivered to your seat? Assigned parking? Gambling on every play? Those are just a few. Darren Rovell »