With a chip and a chair, and an iconic stare, Phil Ivey clearly emerged in 2005 as the greatest player of his generation -- or perhaps any generation, for that matter. Tell him that, though, and he'd probably just shrug and look at his shoes. Phil has no time for fame or ego -- just a whole lotta gamble. Phil was surprised to learn he was number one, because, as a big cash game player (and we mean BIG cash games!), he didn't feel he'd entered enough tournaments to have a shot. This year, with a newfound commitment to tournament play, he could prove to be unstoppable. Bluff hails our first ever Player of the Year and poker's most reluctant celebrity.

Bluff: Congratulations, Phil, you are Bluff's Player of the Year; but
you must be getting used to these accolades by now.

Ivey: Well no, I've never won anything like this in the past. Even though I'm usually in the Top 20, I never have much of a chance of winning a player of the year award because I don't play in as many tournaments as everybody else. 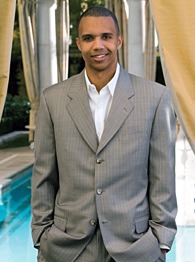 Bluff: Was 2005 your best year for tournament winnings?

Bluff: How did you feel about your 20th-place finish in the Series this year?

Ivey: That was very disappointing for me. I feel like I should have done a lot better. I should have prepared more, and I wasn't as focused as I would have liked to have been. I tried really hard, but my game wasn't there for the entire time. I've got no one to blame but myself.

Bluff: You took a bracelet, though, in the Pot-Limit Omaha event

Ivey: Yeah. I was really happy with the way everything went in that event. It's always nice to get a bracelet because, nowadays, it's so hard to get one. There are a couple of hundred players in each event and the competition's much harder than it used to be. So for someone like me who doesn't play too many events, it's nice. I think I played, like, seven events this year. Next year, I'm going to play a lot more tournaments and we're going to see what happens. Most of my time is spent playing at the big game at the Bellagio. If there was a good cash game going on, I'd sit in the tournament and try to accumulate some chips. And if I got some chips, I'd hopefully make it down to the end. If I didn't get some chips, I'd be out early, and I'd go and play the cash game. That was generally my strategy. But now I've decided to take tournaments a lot more seriously, I've changed that. Now I just play as well as I can all the way through.

Bluff: What made you decide to get more serious at tournaments?

Ivey: Well, getting to wear the Full Tilt logo at the final table is a big incentive, but it's also the realization that I don't want to waste money any more. If I'm going to play in something, I want to give it my all. I don't want to be half-assed. I want to try my best.

Bluff: How did you first discover poker?

Ivey: I was 8 years old and my grandfather taught me how to play five-card stud. We played with pennies. But I didn't play much until I was over at a friend's house when I was about 15. They had a little poker game over there and they asked me if I wanted to play. It was a $20 buy-in thing. So I joined them and I fell in love with the game.

Bluff: What was it about the game that enthralled you so much?

Ivey: It was the way different hands played out and the different strategies of playing. The way certain situations come up when you can bluff, and others when you can't. The variety of the game intrigued me right away. When I was about 17 or 18, I got a fake ID and I started going down to Atlantic City, playing at the Tropicana and the Taj Mahal. That helped me a lot. I mean, I didn't know I was going to play poker for a living at the time -- I just liked to gamble. I'd go down there and play craps or blackjack -- I'd play everything I could.

Bluff: You were "Jerome" in those days. Does anyone down in Atlantic City still know you as Jerome?

Ivey: No, no one knows me as Jerome anymore. It was just the name on my fake ID. I didn't really speak to that many people anyway. I just went down and played poker and that was it. But I told people I was Jerome and then, when I turned 21, I told them I was Phil.

Bluff: What kind of limits were you playing in those days?

Bluff: Did you have a mentor when you were learning the game?

Ivey: Nah, I didn't have a mentor. It was basically just trial and error. I'd learn by watching some of the players that won a lot, and by thinking about the game all the time. So I learned to play on my own.

Bluff: And then you moved to Vegas. Was that a big lifestyle change?

Ivey: Well, Vegas has a much more exciting pace. There's always something to do -- shows to go and see, restaurants to visit -- that's what I like about Vegas. But the reason I moved is because the biggest games in the world are here. I moved here because I had to move here.

Bluff: You seem quite publicity shy. Does fame interest you in the slightest?

Ivey: Fame has never interested me. I'm a poker player. I don't feel like a movie star or a rock star. I just go in there and try to play poker and make my money. I've been playing poker my whole adult life, and then they put a camera in front of me and everybody starts looking me like I'm famous or something. I just play poker and I'm quite good at it. I mean, I appreciate all the fans, and I understand it's really good for poker, but I'm not really into the fame thing.

Bluff: What makes you good at poker?

Ivey: I guess I'm good at reading people; I have patience when I need to have patience. I've practiced a lot, and seen a lot of different situations come up; I'm able to adjust to the better players, seeing as I play with the best in the world. It's about being able to make good decisions at the table. That's what makes a good player.

Bluff: Are you at the top of your game? Can you identify any weaknesses in your game?

Ivey: There are always weaknesses in everybody's poker game. Any weaknesses that top players have, we know what they are and we make adjustments. If you weren't a poker player, given your talents, what do you think you'd be? Well, since I've been a poker player pretty much since the beginning, that question's kinda hard to answer. You never know where life might take you. Maybe I would have been a stockbroker. I probably wouldn't be working for somebody; I think I'd be doing my own thing.

Bluff: How about when you were 7? Did you want to be a fireman?

Ivey: When I was 7, I wasn't thinking about nothing. [Laughs]

Bluff: People don't know a lot about you away from the table. What do you do when you're not playing?

Ivey: I play golf  a little basketball every once in a while  I like to travel, go to restaurants, chill out with my wife  just relax and have a good time.

Bluff: How did you meet your wife? Does she play poker?

Ivey: No, she doesn't play at all. We met when we were 18 years old. I was a telemarketer for a while in New Brunswick, N.J., and she was the secretary there. And we've been together ever since. She's a blessing in my life, that's for sure. She travels with me everywhere and takes care of everything I'm not able to take care of. She keeps me grounded, and without her I wouldn't be as successful as I am. We're probably going to start a family next year.

Bluff: Behind every great man there's a great woman.

Bluff: Who's your team?

Ivey: I don't really have a team. I guess my team is whoever I bet on.

Bluff: Are you a big sports bettor?

Ivey: Not a big one. If I go to a game, then I'll bet on the game. I used to bet sports a lot, but I've cut down on all that stuff.

Bluff: What's the craziest bet you've ever made?

Ivey: I bet someone that I would be able to beat him at golf in 10 years. He shoots in the low 80s, so that's a pretty crazy bet if you've ever seen my golf. I'm just going to practice in my downtime, and hopefully get better and be able to beat him. I have some good golfers who are trying to help me out once in a while.

Bluff: How much is the bet for?

Ivey: [Guilty laugh] Let's just say it has some zeros in it.

Bluff: Do you play a lot online?

Ivey: I play a lot at FullTiltPoker.com. I try to play every day -- half an hour to an hour. Every time you play a hand, be it online or wherever,
you learn something. That's the great thing about poker.

Bluff: How many tables do you play at once?

Ivey: That depends on what kind of mood I'm in. A couple of years ago I used to play eight tables at once. Now I usually play two or three. But sometimes I just play one. When I play on Full Tilt, I play a lot of play money and just talk to the players; I help them learn the game and give them the chance to play with the pros.

Bluff: You seem to have a mask of unflappable concentration at the table. Does anything ever get under your skin?

Ivey: Players always try to get under your skin, but you gotta realize it's all psychology. They're trying to get you off your game. I just laugh it off. Anything anybody ever does to me at the poker table, it doesn't really
bother me too much. Unless it's really, really out of line. Then I might have to say something.

Bluff: We know you're a sensible young man, but what's your most extravagant purchase to date?

Ivey: I went with a friend to help him buy a car, and there was this Mercedes McClaren in the parking lot. I asked the salesman how much it was. I said, "That's too much money for a car!" He said, "Take it for a test drive," I got back and I'm like, "Where do I sign?"

Bluff: How fast have you got that thing going?

Ivey: About a buck-seventy. You take it out to the speedway and race it around the track.

Bluff: The card rooms fly you around the world on private jets these days. What are these hushed rumors we hear about high-stakes games at 40,000 feet?

Ivey: If Barry [Greenstein] and I fly, we play $2,000 a point Chinese Poker. That's a real expensive game. You can win or lose a couple of hundred thousand.

Take the Bluff reader's poll and tell the poker world what you think!. If you enjoyed this article, subscribe to the #1 poker magazine in the country: Bluff magazine or visitt bluffmagazine.com.