Armed with just a single Post-it note and a Jedi-like prescience, Annete_15 famously won a $4 buy-in, 180-player tournament without looking at her cards. Playing cheap tournaments blind can be a great way to hone your instincts and situational awareness. Here's some invaluable advice from Norway's foremost diminutive poker diva.

You don't want to be playing big pots in the early stages of the tournament. The stacks are so deep that people aren't going to be putting chips in the pot unless they have a good hand. Instead, you have to figure out who the bad players are because those are the people you'll want to be taking chips from later on. If you see people limping into every pot, you're going to be isolating and bullying them when you have position, trying to take down the pots -- preflop if they fold, and postflop if they call. 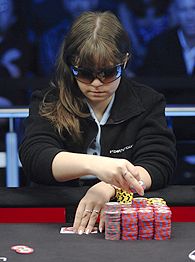 OK, so I peeked at my cards once. It was pretty early on in the tournament. A short stack called my raise and shoved all-in after my continuation bet on the flop. There were three clubs on the flop and I was getting pretty good odds, so I decided that if I had a club, I would call. I peeked, and sure enough, I did. I called and lost a big pot. So much for looking at your cards!

When the blinds start getting bigger, you want to start re-stealing if your stack is big enough. For instance, if you have 15 big blinds and the cutoff opens for three big blinds, you can just shove all-in because your opponent will fold a lot in that spot. If you get a little deeper, you can start reraising people without having to go all-in. It really all depends on your stack size and how you feel your opponent is likely to play.

Position is everything. If you're not looking at your cards, position is pretty much the only tool you have. You can't be opening under the gun with nine people to act behind you because at least one of them is going to have a hand with which to play back at you.

Heads-up is really tough -- almost impossible. You can never call an all-in because you don't know what you have -- obviously. Plus, your opponent will be playing at you really aggressively. It's about always having the last punch. You have to be the one going all-in to give your opponent the opportunity to fold. Then you have to get lucky. When I won the tournament, I three-bet all-in on a 10-high flop and he bluff-called me with queen-high and I had king-high. I was very lucky to have the best hand, but you don't win a tournament playing blind without getting lucky.

How to win a tournament by looking at your cards

Controversially, Annette sometimes plays tournaments while looking at her cards, although many think this gives her an unfair advantage. Here are some handy tips:

Early on in a tournament you should be playing small pots in position with suited connectors because those are the hands that crack big hands. You want to be able to crack aces and kings early on because players overplay those hands so horribly and you're getting huge value.

Likewise, you mustn't overplay your own big hands. The biggest mistake I see people making is overplaying aces or kings, or even A-K, early on. You don't need to reraise with A-K at the beginning of a tournament because you're going to be missing the flop and people will try to bluff you out -- it's just a really hard hand to play.

Players who don't know how to play well postflop often play too many hands, and that gets them into trouble. They make small mistakes that cost them big later. If you call a raise with K-Q and the flop comes queen-high, you're going to lose a lot of chips to a raiser with kings. Usually, it's better to fold those hands preflop to a raise. I'll open-raise with K-Q but I usually won't call with it. You don't want to go broke with top pair.

I see so many players call from the small blind with A-J after position opens. It's better to let those hands go when you're out of position. Wait for a better spot. Even if you flop top pair, you don't know where you are, and there are so many hands that can dominate you here. If you have position you can control the pot better.

Pay close attention to table image. Because I'm known as being so aggressive, people play back at me hard. I can't remember the last time I was deep in a tournament and didn't get reraised preflop! I've really had to tighten up my game.

If you're making the move from online to live, it's important to continue playing your own game, just like you do on the Internet. Don't worry too much about looking for "live tells"; they're not that much a part of the live game. If you try too hard you'll just confuse yourself. Sometimes I think I have a tell on a guy and I go with it and I'm totally wrong. It turns out he was actually drinking water because he was thirsty!

If you enjoyed this article, subscribe to the No. 1 poker magazine in the country, Bluff.