Note: On Tuesday, September 27, Johnny Chan joined in the effort to raise money for hurricane victims. Chan's fundraiser was supported by over 300 doctors and students and raised over $100,000.

I would be lying if I said I wasn't looking forward to Friday, Sept. 23. It was the previous Tuesday afternoon, and I had just e-mailed my boss saying I wouldn't be coming into the office Friday afternoon, when I received the e-mail saying that Johnny Chan would be coming to ESPN. I went into my sent items and clicked "Recall this message" as fast as I could.

Although there are athletes and celebrities around beautiful Bristol, Conn., all the time, poker players don't come along all that often. If they even show up in Connecticut, it's probably because Foxwoods is having a major tournament. This time was different.

Chan, taking the red-eye from California, arrived at the Bristol campus around 2:30 p.m., and his schedule was as loaded as the buffet at the Mirage. 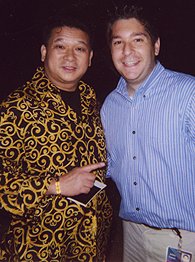 His first stop was ESPN's television station Pacific Rim for a quick half-hour interview about the World Series of Poker. Shortly afterward, I met up with Chan and his agent, Matt Wind, at the cafeteria, and my day with Chan had begun.

The ESPN campus in Bristol is broken up into two areas. ESPN.com is located in Building B, which is situated up a hill off to the side of the main campus, so we would need to get a ride. It was at that point in the day when "poker royalty" visited ESPN.com via a mini-bus, probably the least impressive vehicle he has ridden in since he won his first WSOP bracelet.

Once inside, Chan had a quick shoot with Mobile ESPN and ESPN 360. Hopefully this will be on ESPN 360 soon, because the video is priceless. Chan was cracking everyone up with some of his responses, and his word associations were unique, to say the least. For example, when Phil Hellmuth was mentioned, Chan decisively answered "Phil Gordon." I'm still trying to determine the meaning of his answer.

After that, it was time for SportsNation to have its shot at Chan. Receiving thousands of questions, Chan answered as many as he could in the one-hour time span. At the end of the hour, he was joined by Chris "Jesus" Ferguson, who was glad to be with us for the rest of the day.

Around 5:30, it was back to the bus, and the two superstars were headed back to the main campus for their studio tour. After checking out the screening room, the two had a chance to visit the "NFL Live" and "SportsCenter" studios. While in the studios, Chan took a whole lot of pictures and Ferguson admired the technical capabilities ESPN offered. We headed back to the cafeteria, where the two had to get ready for the "This is SportsCenter" commercial that was being filmed.

There was some dead time, and here's where the fun began.

I didn't care that it only lasted two hands. I played with Johnny Chan and I guess for one minute, I was Mike McDermott in Rounders.

Of course I won against Chan (was there any doubt?), so why not try my luck against "Jesus"? Although it lasted a couple minutes longer than my endeavor with Chan, my pocket 10s were dominated when Ferguson's J-8 flopped top two pair.

I didn't care. Jesus busted me and I didn't spend 10K for it to happen.

After some more photos with fans and onlookers, it was time for some real action. Chan and Ferguson spent the next three hours behind the camera filming a 15-second commercial, which will be hilarious when it airs on TV.

After the commercial, Chan, Wind, and I went out for dinner, then parted ways, and although he jokes about each hour away from the table costing him $5,000, Chan thankfully didn't charge me for this quick interview:

Andrew Feldman: What did you do after you won your first bracelet and your 10th bracelet?

Johnny Chan: The first bracelet was very exciting. I bought my first Mercedes with that money. As for the last bracelet I won, I just put in the box with the rest of the bracelets. Anyone who wins their first bracelet will be walking on water. But after you win a few, it's just like another day in the office.

Feldman: What is the toughest part about being a professional poker player?

Chan: I don't think any of it's tough. I enjoy it. But traveling -- that's the worst.

Feldman: Do you believe that the television shows have hurt your table image?

Chan: No. Not at all. Helps it if anything.

Feldman: Every time you sit down to play, you are learning something about the game. Who or what has taught you the most about poker?

Chan: Probably Chip Reese. I watch what he does at the table and I learn.

Feldman: What do you believe is the most important characteristic of a successful poker player?

Chan: Patience. You've got to pick your spots. Who you play against and what hands you feel comfortable playing against your opponents with.

Feldman: If you weren't involved with poker, what would you be doing?

Chan: Running my own business. Maybe a restaurant or a nightclub.

Feldman: What has been your favorite poker moment?

Chan: Winning the first WSOP. It's every player's dream.

Feldman: What is your opinion of online poker?

Feldman: But what about the amount of practice it gives you when you aren't at the tables?

Chan: I've been practicing for 30 years.

Feldman: Has somebody ever walked up to you and said, "Hey, you're the guy from 'Rounders'" and not recognize you as a professional poker player?

Chan: All the time! The first day the movie was out, someone walked up to me and said, "Hey, are you that Johnny from Rounders?"

Feldman: What is one thing people do not know about Johnny Chan?

Feldman: How do they like seeing their dad on TV?

Chan: They love it.