There's no official all-star game in poker, but perhaps the closest thing to it would be the National Heads-Up Championship that will be held at Caesars Palace Saturday through Monday.

The usual names will be there: Defending champion Phil Hellmuth, runner-up Chris Ferguson, Phil Ivey, John Juanda, Daniel Negreanu. The list of top pros goes on and on. However, you will also get a close look at David Chesnoff, Steven Glassner, and don't forget Rene Angelil.

Mr. Celine Dion? Showing up to a table in Vegas is one thing. Showing up at a final table ought to be a criterion. 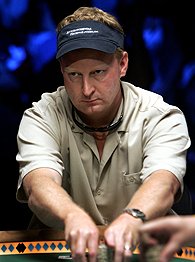 Why is he in one of the most prestigious tournaments held this year? For lack of a better word, it's baffling.

The tournament, to be televised on NBC starting in mid-April, features a 64-player field, which is established through invitations from a selection committee. One promotional online qualifier was also added to the field.

Sixty-four of the world's best poker players should have been invited, and if the invites were based on talent alone, there would be no doubt that the names above would have been included. The selection committee left out some tremendous talent, some of whom have accused the committee of snubbing due to the politics of the process, and even race.

Similar to the setup for the NCAA's March Madness, 64 players compete in four separate "regionals" until one winner is crowned. It takes six wins to be a champion, and just one loss to earn your ticket home.

John Phan wanted to be that champion, or at least get the chance to play. Ranked consistently among the top 10 players throughout all of last year, Phan believed he was in the event. Last week he got a call saying he wasn't.

"Last week, I was on there, then they just took me off," Phan said.

Phan's point? Why would they snub one of the top players and replace him with  David Chesnoff?

"They'll make poker look really bad,'' Phan said. "If I don't get a chance to be invited, who should take my place? They should've given me the invitation to play. Look at my ranking. It's the same thing as 2004, when they told me I would be in it next year
.

"There are players that haven't even played a tournament in the last year that are playing. I thought they would turn everything around. I don't even know these players' names."

Gracz
has one theory as to why Phan and David Pham were left out.

"Phan should have been in that field,'' Gracz said. "He doesn't get the respect he deserves. A lot of it is because he's Asian. I know we say that poker is a game for everybody, but I feel that a lot of the Asian players aren't recognized beause they're Asian. They don't get the credibility they deserve.

"David Pham in my opinion is one of the top three no-limit players in the world and there's a slew of others that don't get the attention they deserve, either. Hopefully that will change and players will be recognized and chosen by their credentials and not a popularity contest."

A case also could be made to include Gracz, who proved he ranks among the elite after winning a WSOP bracelet and WPT event last year. Just don't expect the modest Gracz to make it.

"I try not to really think about it," he said. "I was a little disappointed, but you have a Rookie of the Year in Major League Baseball and sometimes they aren't invited to the All-Star Game. I was happy to have the year that I had. To even be considered to play in that tournament was great, but the fact that it didn't work out, I was OK with it."

Dannenmann, who in addition to his tremendous performance at the WSOP also finished fifth in the Tournament of Champions, was frustrated by the snub.

"I'm a bit disappointed,'' Dannenmann said. "I really felt that I should be in this tournament. I'm not a superstar, I'm still an amateur, but I think I proved myself. If it's about the ratings, then why wouldn't you have Steve in there?"

He should be there. For a man who only plays a couple of tournaments each year, he's excelled in some of the biggest. He also finished just out of the money at the Borgata Winter Open earlier this year. He's an amateur, but deserves his spot in this tournament.

"I'm very fortunate and very lucky with what has happened to me,'' Dannenmann said, "and if I never make another final table again, so be it. But I want to play!"

Dannenmann has also been a pleasure to watch on television, and if there is anyone else who has more fun at the table, I'd like to meet him.

Even though one gigantic name is missing, don't worry; he wasn't a snub. Joseph Hachem, the 2005 WSOP champion, was invited, but could not attend.

"I was invited to play, however, I was traveling to Europe with my family and had to play the Monte Carlo EPT final,'' Hachem said. "So, I gave it a miss this year and will definitely play next year."

That is, if he's invited.

When asked about Dannenmann, Hachem was extremely surprised and thought he had been invited.

Gordon, one of the most popular poker players due to his stint on the show "Celebrity Poker Showdown'' and other televised poker tournaments, was infuriated by the snub. 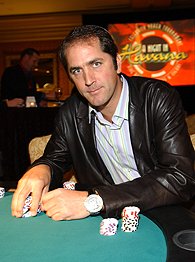 "Five final tables at the WSOP, two WPT victories, over 230,000 educational books sold -- and no invite?'' Gordon said. "What does it take?"

Gordon sent his entire media kit to the committee, but unfortunately wasn't contacted and was not invited.

Joe Sebok, who had no expectation to be selected as part of this event, also felt the selection process was not defined clearly enough.

"It certainly makes you wonder what qualifying agents they used in making the decisions," he said.

The invitation process will be under a lot of scrutiny after this year, but it isn't exactly clear how the players are selected. NBC did not return any calls to address these questions.

Fans of televised poker want to see the best matches in every round. Diluting this field will not only reduce the appeal to the casual viewers who want to see their favorite players, but could result in poorer competition.

I don't know about the talent of these "random" additions, but what could be better than Dannenmann facing off against Hellmuth in Round 1 to rekindle their fondness from the Tournament of Champions? Great poker and great TV. Instead, you'll have James Woods vs. Chris Moneymaker, Dee Luong vs. Jerry Buss, and Barry Shulman vs. Josh Lochner.

Official matchups will be announced Friday, but you can imagine the smile on the pro's face when his first-round opponent will be someone he's never heard of.

So what can be done? Each year this committee will have a tough job to do, but there are plenty of ways to adjust the process:

• Include a fans' vote for one or two spots

• Remove the celebrities and the promotional winner

• Give automatic bids based on previous year's performance

• Use magazine player rankings to determine who should be invited

• Use the NCAA's process; certain events get you automatic invites, then have at-large bids

Get rid of the promotional winner, the celebrities, the wannabes, and just put on the best poker show possible. Let the best battle it out.

Unfortunately, this year the best won't be at Caesars.