I like this Al D'Amato fellow already. Tell you why: He understands the value of a poker face.

Take the announcement this week that D'Amato is taking a "leadership position" with the Poker Players Alliance, a group you've never heard of that nevertheless is committed to doing God's work by protecting the rights of card players everywhere to lose money online. At one point while talking about his new challenge in life with a reporter for the New York Times, D'Amato, the former Republican senator from New York, railed against the law passed last year that makes it extremely difficult to play poker on the Internet, saying Congress ought to be more concerned with terrorism and drug trafficking (assuming it isn't) and hailing poker as perhaps America's favorite sport. He added: "You don't have 70 million people participating in baseball." 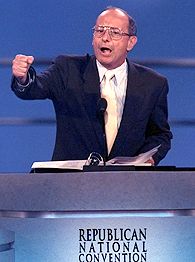 In fact, the PPA's news release estimates that only about 23 million people played Internet poker last year, meaning Al has a bunch of Friday night garages to fill if he's going to get his sport up to 70 million nationally. But why let all that cigar smoke get in the way of a good story?

Every hold 'em junkie now has a former U.S. senator to call his own. D'Amato isn't just the lobbyist hired for big bucks to represent online gaming; he's a customer. D'Amato is one of the more famous poker players in congressional history, assuming such a list might exist, and that takes in a whole lot of territory normally reserved for calculated liars, convicted cheats and general obfuscators -- and we still haven't gotten to the poker table yet. He's the man.

Of course, D'Amato is working for money. The PPA, which puts its membership at 160,000 (again, take it or leave it as an estimate) is taking aim at a bill passed last year that banned using credit cards or online payment systems as part of online poker and other gaming activities on the Internet. D'Amato is a longtime player, mostly with a regular group of friends and colleagues rather than online. Still, put such theological synergy together with the ability to pay up, and you've got yourself a lobbyist.

What D'Amato and the PPA seem to hate the most is the fact that Congress casually lumped in poker with other online games of chance. As they see it, poker is a game of skill and chance, which therefore entitles Al to call it a sport, which blah blah blah -- you can see where this is going. D'Amato rallies to the defense of those brave and heroic online gamers, who evidently need protecting in the form of Congressional legal re-interpretation. (Translation: Exempt poker from the no-credit-card law, and we're good to go.)

D'Amato also raises a point with which American history is likely to agree, even if it's comically misguided here. "Prohibitions don't work," he said in the PPA's news release. "They only create unintended consequences."

Just like liquor, in other words. Well, drinking, gambling – you get the idea. Try to ban card games online, and they'll only start playing poker in somebody's living room late at night, buying their own chips or using makeshift materials like pretzels and M&Ms as token "money." Where will the madness end?