The man whom esteemed pro Barry Greenstein calls the best tournament player in the world plans on playing a lot more tournaments next year. 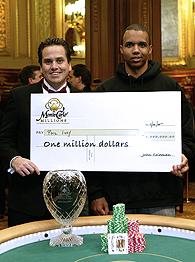 "I'm going to play a lot more tournaments than I have been. That's my plan. I probably played about 15 tournaments last year. I just plan on playing in the major events and whatever else might come my way.''

If the last couple of weeks are any indication of what this will mean to the tournament world, everybody better duck.

During Thanksgiving week, Ivey ran the table. First, he pocketed $1 million in winning the Monte Carlo Millions. The next day, he took every chip and the $600,000 top prize in the FullTiltPoker.net Invitational.

This follows Ivey's win in the World Series of Poker's $5,000 Pot Limit Omaha event, for his fifth WSOP bracelet. He has made it to five final tables in 2005, good for more than $3.3 million in tournament payouts.

Understand, Ivey doesn't have to go to Monte Carlo to play for a million bucks over several days. He could just grab a seat in "Bobby's Room,'' the high stakes -- heck, highest stakes -- poker room at the Bellagio and trade seven-figure pots with the likes of Greenstein, Doyle Brunson, Chip Reese and Chau Giang.

But he came, he raised, he conquered.

And collected his first million-dollar payday in a no-limit hold'em event.

"It meant a lot because last year I went over there and came in third place,'' Ivey says. "I felt like I really should've won the tournament last year. So to go ahead and come through and win it this year is kind of like sweet revenge. Last year, I got down deep and there was a big pot that came up where if I'd have won that hand, I probably would've won the tournament.

"The structure was perfect because it gave you $50,000 in chips to start out with. Most big buy-in tournaments, the buy-in's $10,000 and they give you $10,000 in chips. So if you lose your first couple of hands, you're down to $4,000-$5,000 right away and it changes the way you play. In this tournament, I lost my first couple of hands and I still had $43,000 in chips, so I was still able to play poker. That's a big difference from other tournaments. If you get knocked down right away, you have to play a short stack. In this tournament, I felt like I always had a chance.

"The first day, I ended up with $220,000. The second day, I lost two big hands and got knocked down to $40,000, but I was still able to build back up because I had a lot of chips to play. So when you have the structure like this tournament was set up, it gives the better player a much better chance of winning.

Ivey got as deep as 20th in the World Series of Poker main event this year. A lot of people thought he would cop the $7.5 million first prize, and Ivey was certainly one of them.

"Of course I thought I was going to win it,'' he says, "but the truth is, I never felt like I was on my game the entire tournament. I was trying really hard, and that was getting me by, but I didn't feel like I was on my game, for whatever reason. I don't know exactly why. I guess I was kind of goofing off that month and not focusing like I really needed to be.''

Wait a minute. Goofing off? Phil Ivey? Phil Ivey doesn't goof off. I mean, the one thing that scares everyone is Ivey's focus.

"At the table, I'm focused,'' Ivey says. "I was focused at the tournament; I just wasn't on my game. There are a lot of different reasons why you might not be playing your best.''

Maybe it was because lucrative cash games awaited. Despite Ivey's newfound motivation to play tournaments, you see, he's still driven by the competition of cash games.

I've been around Michael Jordan for a lot of years, and I know that when people play golf with him, they always ask if he wants to put some money on the match. Well, yeah, of course Jordan wants to put money on it. That's what he lives for. So the other players will ask, "How much do you want to play for?'' and Jordan's stock answer is, "Whatever amount makes you nervous.''

So what amount of money makes Phil Ivey nervous?

"There is no amount of money that makes me nervous,'' he says. "You've got to remember, I don't come from money. To me, when I'm gambling, it's what I do. It's who I am. I don't get nervous when I'm betting big money. I just try to make good decisions. I never really got nervous about money because I always feel like no matter how much I lose, I can always recoup it. I might have to play a little smaller or play a little harder, but I always feel I can recoup it. That's how I always felt my whole life. If I had it and I'm able to bet it, I will.

"I know that if I play poker and I put in the hours, I know that I'm going to win over time. I know it's just a matter of time. It's like a job. I just have to go back to work.''

Ivey's drive and confidence in his abilities have been there seemingly since he was a kid growing up in New Jersey. Although he looks like an athlete -- he runs every day -- Ivey never played sports seriously.

"I would always be playing craps or gambling at something,'' he says with a laugh. "So sports kind of took up too much of my time.''

Ivey admits to sneaking into Atlantic City casinos with a fake ID when he was 16 before moving there after turning 21. He brought with him $500 and, more importantly, a streak of gamble.

"In order to be one of the best poker players in the world, it's very important to be able to put it all on the line and be able to take chances,'' Ivey says. "To be really good at poker, you can't be tight with money. It's hard to be really good at poker and be tight with money because you're always gambling for big amounts of money and you have to have a certain disregard for money.''

Funny thing, money. You have to act like it doesn't matter, and yet it's the first thing that matters. Money gets you a seat in the game. Money gets you power at the table.

"If you play a lot of poker, you realize that the better players play a lot of hands and they take chances,'' Ivey says. "The players that don't do as well are just sitting there folding every hand and not taking chances. I'm playing against the best players in the world day in and day out, so you can't just sit there and play only good hands all the time. You've got to take some chances and know when you're beat and know how to get certain advantages.

"The bottom line is, you look at these tournament players and you see that they say they're the best tournament players in the world and blah, blah, blah and that's what we hear,'' Ivey says. "But the big players kind of laugh at that because if they were really the best players in the world, why aren't they playing $4,000-$8,000 at the Bellagio, winning millions a year? It just doesn't make much sense. If you're the best, you should want to play against the best. Don't get me wrong, there are a lot of really talented tournament poker players out there, and I'm not taking anything away from them. I'm just saying don't claim to be the best player in the world when I don't ever see you playing in a poker game [at the high-stakes table].''

Ivey wants to get back to his cash game, of course. But I have one more question. It's about his public persona and his seeming choice to remain private and resist sitting still for interviews. He's charismatic despite being a bit of a mystery -- perhaps he's charismatic because he's a bit of a mystery -- and as you have read, he has much to offer. But he has not offered much of it before. And yet, he is doing just that now. So, why?

"I'm not really as private of a person as they claim. I just don't like to be bothered when I'm playing poker, [and] the majority of time, I'm playing poker. That's the thing. I don't like to take time away from my poker for anything. The only reason I'd take time away from my poker is for my wife, my family, things that are really important to me. Me doing an interview doesn't take importance in my life. You understand what I'm saying? For me, it wasn't that big of a deal. I'd turn down interviews and these public appearances because I'd rather be playing poker. That's what I like to do.''

And now he plans to sic his phenomenal poker-playing abilities on more tournaments. Consider yourself warned.

Steve Rosenbloom's book "The Best Hand I Ever Played" is available at bookstores everywhere. A regular contributor to ESPN.com, he is also author of a syndicated column for the Chicago Tribune. To leave Steve some feedback, check out his mailbag.