Gavin Smith's poker resume continues to grow as the World Poker Tour named him its Player of the Year Thursday. 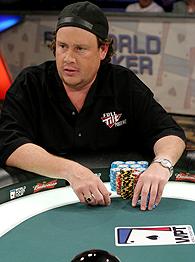 Smith will receive the award next week at a very familiar location: the Mirage, the site of his first major tournament win (a $1.1 million payout) one year ago.

"It feels great," Smith said. "It was a lot of hard work, a long season and it feels good to get acknowledged for having a good year."

Although Smith felt his defining moment of the year was his victory at the Mirage, he felt that his performance in that event ranked only third.

"Although I was happy to win the tournament, I'm really proud of the way I played at the Bellagio and Tunica," he said.

If the group of previous winners is any indication, this achievement is only the start of a brilliant poker career.

"Making the three final tables finally proved to everyone that I knew a little something about poker," Smith said.

Andrew Feldman is the ESPN Poker Club's columnist, editor, producer and tournament director. Andrew is also the co-host of the Poker Edge on ESPNRadio.com. To contact Andrew, e-mail andrew.j.feldman@espn3.com.