The World Series of Poker was won in a casino, but ownership of the $12 million winner's pot may ultimately be decided in a courtroom.

A district court judge has issued a restraining order to prevent WSOP champion Jamie Gold from collecting his winnings until the settlement of a lawsuit against Gold filed by Crispin Leyser, a television development executive and instructor for the World Poker Tour Boot Camp.

Leyser claims in the suit that he should be receiving half of Gold's first-place prize money in the WSOP's main event because of an arrangement Leyser says he and Gold had made prior to the start of the tournament.

Clark County (Nev.) Chief District Court Judge Kathy Hardcastle issued a restraining order Tuesday to prevent Gold from collecting his winnings from the Rio Hotel and Casino until at least Sept. 1, when the first hearing of the lawsuit is scheduled.

"As evidenced in the complaint, our presentation is strong," Leyser's attorney, Richard Schonfeld, said. "The judge preliminarily found that we are likely to succeed on the merits of the case and therefore granted the temporary restraining order and the hearing on Sept. 1." 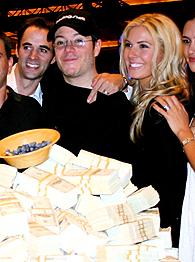 According to the lawsuit, Gold, whose entry into the main event was paid for by the online poker site Bodog.com, approached Leyser asking for his assistance in finding celebrities to play under Bodog's name. If any celebrities were found, Bodog offered either Gold or Leyser one seat to the main event. He and Gold agreed, the lawsuit says, that whoever received the seat would give 50 percent of the winnings to the other.

The lawsuit, a copy of which was obtained by ESPN.com, claims that Leyser found actors Matthew Lillard and Dax Shepherd for Gold. Bodog awarded the extra seat to Gold, who went on to conquer the biggest field in WSOP history (8,773 players) and claim the tournament's biggest grand prize ever.

According to the lawsuit, hours before the final table began, Leyser received the following message from Gold on his phone: "I promise you -- you can keep this recording on my word -- there's no possible way you're not going to get half after taxes.

"So please just be with me. I can't imagine you're going to have a problem with it. I just don't want any stress about any money or any of that [expletive] going on today, or even after the end of the day.

"But please just trust me. You've trusted me the whole way, you can trust me a little bit more. I promise you there's no way anybody will go anywhere with your money. It's your money."

Leyser now claims Gold refuses to direct the Rio, which hosted the event, to pay him the $6 million.

Gary Thompson, the director of communications for Harrah's, which owns the Rio, said once Gold won the main event, he had the opportunity to go to the cage at the Rio and give instructions to split up the money on the spot.

"When a person wins a cash prize, whatever the amount is, they can designate that part of it can go to a different individual," Thompson said.

Thompson said each recipient would then be accountable for his own federal tax liability, which in this case, according to the IRS's Web site, would be 35 percent of the winnings. Should Gold keep all $12 million, he would owe $4.2 million in federal taxes alone. If Gold splits the prize money at the casino, he and Leyser would each owe $2.1 million on $6 million apiece. Gold and Leyser would also have to pay state taxes.

If Gold were to pay all the taxes first, then split the money outside of the casino, Thompson said whoever he split the money with still would be responsible for taxes on his half. Should that happen, Leyser would get between $1 million and $2 million less than what he'd receive if they split the prize money before taxes were taken out at the casino.