LAS VEGAS -- At every World Series of Poker, actors and
athletes who are stars in their own right take a shot at the
biggest poker prize alongside professional gamblers and average
dreamers.

While celebrities are ideal for marketers and sponsors, their
early exits in the $10,000 buy-in main event leaves open the
question whether they are just here for fun and a quick TV
soundbite or willing to grind it out through hours of play over the
poker marathon of the year. 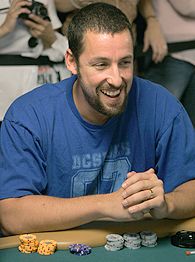 "To me, this is like, if you jog at all, it's a kick to be at
the New York Marathon when it starts off," "Seinfeld" actor
Jason Alexander said. "You know you're not going to win, but
you're there. It's pretty cool."

Several celebrities, however, have become part-time professional
poker players, too.

Jennifer Tilly, the Oscar-nominated actress who won the World
Series' ladies event in 2005, made the money three times in earlier
events this year and is a regular in the poker world.

She said she puts in the hours required to become better, and
compared celebrities to other hopefuls who hold regular jobs but
hope to beat spectacular odds to win.

"The last few years, the person who won the World Series was
not a professional," she said. "It takes intuition and skill and
also a lot of luck. So really anybody can win the World Series of
Poker, even a celebrity."

Talk show host Montel Williams even held the chip lead for
several hours on Saturday, at one point amassing 150,000 in chips
after starting with 20,000.

But a few spectacularly bad calls later and he was back in the
pack, ending the day almost back where he began with 20,900.

Phil Gordon, a poker professional and expert commentator on the
"Celebrity Poker" series, said after analyzing many celebrities'
play, he noted many were good, but could fall victim to a
catastrophic misstep.

"No-limit Hold'em is a game of mistakes and it only takes one
big mistake to end your tournament life," he said. "These guys
are good enough to compete, but over the course of several days,
there are going to be multiple times where they're going to have a
chance to make that big mistake."

"Quite a few celebrities do have several years of experience,
but they're a small minority," he said. "The bottom line is
you've got to hold the cards."

Tilly showed some wisdom by losing only about 3,000 in chips
when her kings-full full house lost to the higher aces-full
version. Before the dinner break, she busted out with a queen and
jack when her open-ended straight draw lost to pocket aces.

Several celebrities have already made it through their first
day, including "Spiderman" actor Tobey Maguire and "Everybody
Loves Raymond" comedian Brad Garrett. However, former major league
slugger Jose Canseco was knocked out in just a few hours.

Several people mentioned Maguire as the celebrity with the best
shot.

"He's got the perfect disposition at the table, he's studied a
lot, he plays in huge cash games," Gordon said. "He definitely
has a game that could get deep, maybe even final table, maybe even
win."

The stars also have access to an elite set of teachers who help
them bone up on their game.

"American Pie" star Shannon Elizabeth took copious notes on
her first day Sunday, and has pro Annie Duke as a personal coach.
She advanced to the semifinals of the NBC National Heads Up
tournament in March, defeating renowned players Jeff Madsen, Barry
Greenstein and Humberto Brenes.

"I'm trying to be a pro player so I'm hoping people take me
more seriously," she said. Elizabeth beat a path to the door,
however, when her pocket kings lost to a player with two pair,
queens and jacks, and she had no chips left.

"Just, you get the right mindset, just be patient and just be
calm. And that's basically what his advice to me was. Because the
game don't change," Tarver said. "It all depends on the cards. If
I catch 'em, I know how to bet 'em."

Later Sunday, Tarver was KO'd when he moved all-in with pocket
sixes but got called by a player holding an ace and king, and who
made three kings for the final blow.