It was a shot that meant nothing to some and everything to others.

When Duke senior Chris Duhon nailed a 38-foot three-point shot off one leg as time expired in the semifinal game against the University of Connecticut on Saturday night, the Blue Devils still lost the game. But to those who wagered on the blue and white, the fortuitous bank shot that made the final score 79-78 meant that the underdogs covered the spread, which was between two and three points. 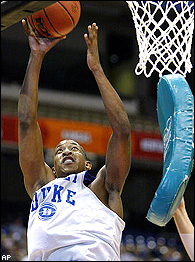 With approximately $100 million being bet on March Madness each year in Las Vegas and about $2.5 billion wagered online according to the FBI, the Duhon shot transferred anywhere from $30 million to $100 million from those who bet on UConn to cover the point spread to those who bet on Duke to cover, as estimated by those closely tied to the sports gambling business.

Last-second plays that do nothing to the game's outcome but affect the money being wagered on the game commonly occur. But it is not often that a shot like Duhon's involves so much money. Avello said he believes that the amount of money transferred on the shot was among the top 50 he had seen in his 16-year sports gaming career in terms of total dollars shifted.

"At the end of the game, the announcers made it seem like Duhon's shot didn't matter, but it did here," said Jeff Sherman, race and sports supervisor for The Palms, a Las Vegas-based hotel owned by Sacramento Kings owners Gavin and Joe Maloof. "There was more money riding on this game than the average NFL game and this one shot represented a monumental swing for the bettors and the sportsbooks."

Sherman said that since Georgia Tech covered the 4½-point spread against Oklahoma State and also won the game with bettors playing the money line (betting that a team will win straight-up, or without getting or giving points), the sportsbook was not having a good day heading into the second of the two Final Four matchups. The higher odds placed on an underdog winning force the casino into larger payouts on the same size bet if the underdog does win the game outright.

But Duhon's shot turned a bad day into a good day for the house. Sportsbooks often have their best days on big games when the underdog covers the spread, but doesn't win. That was the case in the Elite Eight when Oklahoma State defeated St. Joseph's 64-62, meaning that the favorite prevailed (the Cowboys) but didn't cover the spread (2½ points).

The Duhon shot caused a $630,000 positive swing for BetCBSports.com, an online sportsbook based in Costa Rica. The sportsbook took more than 10,000 bets on the Duke-Connecticut matchup, with more than 8,000 bettors placing an average wager of $50 on UCONN to cover a 2- to 2 1/2-point spread. If Duhon didn't hit the shot and Connecticut prevailed 79-75, BetCBSports.com, which has no affiliation to the network broadcast partner, would have lost $290,000 instead of making $340,000, according to Dan Johnson, senior oddsmaker for the betting site.

"When Duhon made the shot, there was an overwhelming feeling of euphoria here," said Johnson, who was in the company's headquarters surrounded by televisions. "We all jumped up in unison and that doesn't normally happen in this business."

While many focus on Duhon's shot as the sole culprit to determining their winning or losing of the bet, others cite Connecticut center Emeka Okafor as a key player in aiding Duke bettors to a victory. Okafor was fouled with 3.2 seconds left and Connecticut up 78-75.

"If Okafor makes the first and misses the second, Connecticut covers the spread because it would have been very tough for Duke to go the length of the floor off a miss with no timeouts," said Ed Salmons, sportsbook manager for Vegas-based Imperial Palace.

But Okafor missed the first and hit the second, giving Duke the chance to inbound the ball and set up a final play. Duhon received the pass, crossed halfcourt, and heaved up the shot.

Numerous sportsbooks could have lost as well had Okafor made both free throws and Duhon then hit the 3-pointer. Those books that had the spread at two points would have taken a hit, as the game would have ended as a push, costing the casinos the 10 percent fee (the vigorish) they collect on winning wagers.

"What drove people nuts here was that it looked like Chris didn't even care to shoot the shot in the first place," Salmons said. "I bet if you gave him a bucket of balls and asked him to take shots like that 10 feet beyond the three-point line, he couldn't hit one."