Tax day used to be a sigh of relief for new owners of professional sports teams, but for today's owners recently welcomed into the sporting world fraternity, the reception from Uncle Sam isn't as great as it was decades ago.

Boston Red Sox owner John Henry, along with a group of partners, spent $700 million to purchase the team two years ago and will spend $125 million on a team that hopes to beat the New York Yankees this year. But Henry will not benefit as much from what used to be one of the sporting world's greatest perks -- writing off large portions of player payroll. Had he bought a team 35 years ago, his tax breaks would be worth a fortune.

When a group led by Bud Selig bought the bankrupt Seattle Pilots in April of 1970 for $10.8 million and moved them to Milwaukee, the 35-year-old used car dealer and future Major League Baseball commissioner later reported only a franchise purchase price of $600,000 to the government for tax purposes, attributing $10.2 million of the cost to player payroll.

The accounting practice was first used by former owner and renowned promoter Bill Veeck, who discovered that a new owner could use the value of the players' contracts in a sale in order to report a lower purchase price when his group bought 54 percent of the Chicago White Sox in 1959. The deduction could then be used to show smaller profits or larger losses on paper, reducing the taxable income.

But in the three decades since Selig bought what would become the Brewers and trucking magnate Leonard Tose led a group to buy the Philadelphia Eagles for $16.4 million -- he reported a $50,000 franchise sale price to the Internal Revenue Service -- the value of writing off the costs of player contracts has been severely diminished, meaning that there's less celebration among new sports owners on April 15.

There are a number of reasons that tax breaks for new owners are less appealing, including higher franchise prices, a greater net worth of owners and government rules that have restricted amortization -- spreading the cost of a contract over time to help reduce future income taxes.

"It's definitely not a significant motivating factor in purchasing a team," said NBA commissioner David Stern, who has been at the league's helm for the past 20 seasons. "No matter what the tax treatment is, if the team isn't profitable, it can't provide a substantial benefit."

The principal behind the idea that allows a percentage of payroll to be deducted and used to report slimmer profits or inflate losses, is based on the fact that the government considers sports contracts to be an intangible asset. Much like a piece of machinery, whose cost can be written down over a period determined to be its useful life, players also have a useful life value to a sports team, under IRS rules.

Selig and his investors deducted roughly $2 million off the balance sheet from the Brewers and used it to offset the reporting of their personal income for each of the next five years. But in the year after Selig's tax benefits ran out -- write-offs equaled more than $140,000 -- the IRS began limiting the degree to which owners could discount the cost of players contracts to their advantage.

In October 1976, the government unveiled the Tax Reform Act of 1976, which established that no more than 50 percent of the purchase price could be allocated to intangible assets, such as player contracts, unless a rare exemption was granted if an owner provided a reason for exceeding that amount.

The impact was immediate.

Oil investor Robert K. Moses Jr. was reportedly interested in buying the Houston Rockets, but when the deal fell apart, he cited the inability to make the financing package work with a smaller write-off.

In 1986, the IRS added another reform for those looking to become partners in sports teams and use the depreciation value to offset the taxes on their personal business income. In order to do so under the new criteria, owners had to pass one of seven tests that would allow them to be classified as active owners.

"The whole deal shouldn't really exist because owners are not buying the players as much as they are buying the franchise, the rights to the name and the rights to play in the stadium," said Paul Weiler, the Henry J. Friendly professor of law at Harvard and author of "Leveling the Playing Field: How The Law Can Make Sports Better for Fans."

But the tax break has become less of a factor, given the modern state of the business.

"When owners are losing millions of dollars in real money, it's crazy to think that they're fine with it because they are not paying as much tax," said Jeff Smulyan, who owned the Seattle Mariners from 1988 to 1992. 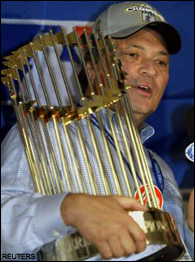 Jeffrey Loria has had more experience with write-offs than any recent professional sports owner. Owners typically can deduct player contracts for the first four or five years of franchise ownership. Loria purchased a majority share in the Montreal Expos in 1999, but the clock started over again three years later when he sold the Expos and purchased the Florida Marlins.

"If we had a loss of $60 million on paper, but $20 million in cash, that's a big difference," said David Samson, president of the Marlins, which reportedly lost $20 million last season despite winning the World Series. "But the only number Jeffrey cares about is that actual cash loss. The benefit of depreciation is far outweighed by the reality of cash losses when you are losing money operationally."

The process of convincing the IRS to even grant the 50 percent deduction became harder when local auditors usually assigned to random projects were replaced by national auditors who specialized in the finances of sports teams, said Carl Fortner, a tax partner on Foley & Lardner's Sports Industry Team, which has counseled several professional team owners on tax issues, including Selig. In October, the IRS sent a 15-page memo to those that audit teams to be aware of the latest government standards as it applied to taxing franchises.

"The IRS has been much less receptive to greater deductions because franchises cost so much these days," said Bob DuPuy, president and chief operating officer of Major League Baseball.

Whereas it used to be automatic that a team owner could attribute a huge chunk of the franchise price to player salaries, team owners now have to hire auditors who determine a true market value for the player's contract instead of the actual dollars being paid to player.

It is that value, according to Fortner, that is shown to the IRS. Unlike decades ago, where owners would simply spread the costs over the first five years of ownership, player contracts in most cases now may be depreciated based on the length of individual contacts. This debunks the theory that new owners are more likely to sell after their fifth year of ownership because the write-off period is longer. Plus, owners are allowed to depreciate other intangible assets, including season ticket waiting lists and suite revenues.

Despite the stress put on cash losses and a more scrutinizing IRS, some say the write-offs still have value.

"The total money for the tax benefit should be increasing in terms of dollars because the salaries have been on the rise for so long," said Scott Rosner, lecturer at the University of Pennsylvania's Wharton School of Business and co-author of "The Business of Sports." "The value is just diminished due to the astronomical wealth of the owners coming into the sport. So the old-guard owner might have saved $2 million in taxes and that meant a lot. The new age owner could be saving $20 million and that's less of a deal."

Ted Leonsis bought the Washington Capitals five years ago and the chance to write-off player salaries from his $85 million purchase of the team is declining. But Leonsis has reportedly lost more than $100 million throughout his ownership reign, so creating larger paper losses won't dull the pain of having to still dole out the cash.

Said Leonsis: "I look forward to the day where (write-offs are) an issue for me."