But the eyes of moviegoers who watch the scene in "Dodgeball" might be distracted by what's in the hand of Ben Stiller's character, a bottle of Vitaminwater, label purposely facing out. 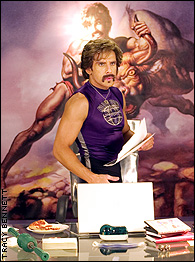 Confronted with the obstacle of switching channels at will, digital video recorders that allow users to zip past commercials and the overall clutter of one ad after another on television, some companies hoping to tap into the consumer's pocketbook are turning to product placement to get their brands in movie and television scenes. An endorsement perhaps more credible than an athlete paid to peddle the same products in advertisement. And, better yet, the cost of the placement usually involves no money -- just free product.

Tom Hanks met his on-screen love interest, Meg Ryan, by using America Online in the 1998 movie "You've Got Mail." Two years later, Hanks was working for Federal Express in "Cast Away," and his latest movie relationship is with Catherine Zeta-Jones, who is a flight attendant for United Airlines.

In the recent movie "Garfield," the cat prefers "Pasta Pomodoro" lasagna, and his owner Jon drives a Volvo. A soon-to-be-released film, "Harold & Kumar Go to White Castle," is perhaps the most blatant form of product placement, a story of two teenagers who set out to find the perfect meal.

"Product placement is one of the ways to reach a captive audience," said Jeff Smith, director of the Grand Rapids Institute for Information Democracy, a Michigan-based media literacy group that last year studied the role of product placement in 50 films. "If you work your product into a TV show or a film, it's impossible for the viewer to zap it out."

"Dodgeball," the slapstick sports comedy that was tops in his first week at the box office, has its share of strategically placed consumer goods. The film, which centers around a small gym owner who gathers a team of members to play in a $50,000 dodgeball tournament he hopes will save his business from a hostile takeover by a rival health club, features products and brands, including Under Armour, Nike, Vitaminwater, Fiji Water, Pepsi, Budweiser, Bud Light, ESPN, Fox Sports and Nautilus. The movie has accumulated box office receipts totaling $67.2 million in its first 10 days in theatres, giving each product huge exposure potentially worth anywhere from thousands of dollars to millions.

In the Globo Gym office scene, Vitaminwater gets 46 seconds of brand exposure, between the bottle seen in Stiller's hand and the bottles on a office shelf. Given the number of people who have already seen the movie, the exposure is worth more than $100,000 in equivalent commercial time, according to Joyce Julius & Associates, a sponsorship evaluation firm. The cost for all this exposure was only 12,000 bottles for the cast and crew -- a retail value of $15,000.

"The first thing we are concerned about with product placement is authenticity," said Rhoades Rader, executive producer of "Dodgeball." "As long as it makes sense to have that product in the film, then we can use it to help offset all our production costs."

The $250,000 worth of gym equipment, provided by Nautilus, made it possible for the film's producers to spend the money elsewhere.

Rader said he approached Vitaminwater in part because he used to work at a gym with a friend who now works for the company. The brand has been particularly active in television shows of late, including "The Sopranos" and "Scrubs."

Under Armour, a sports apparel company known for its wicking material, lucked out in getting into "Dodgeball." Rawson Marshall Thurber, the movie's director, was the director of "Terry Tate," a group of shorts that became a popular Reebok marketing campaign last year. But Reebok hadn't been active in the product placement market since it settled a $10 million lawsuit for breach of contract with TriStar after a Rod Tidwell commercial it paid to be included in "Jerry Maguire" was unexpectedly cut from the film.

Rader said Reebok officials seemed uninterested with the approach, so he offered non-exclusive exposure opportunities to Nike and Under Armour in exchange for free product.

Under Armour has been relatively aggressive on the product placement front. Its brand first appeared on the jockstrap of "Willie Beamon" in "Any Given Sunday," in 1999. The interlocking "UA" logo has since been seen in "The Replacements" and in ESPN's "Playmakers," an 11-part miniseries that ran from August through November.

"Luckily, there seems to be a lot of sports shows and movies out there right now," said Steve Battista, the company's director of marketing. "We just have to make sure we are making the right associations."

Although "Playmakers" was seen by some critics as controversial, it had an impact on sales. Thanks to the fact that many players in the show were wearing them, the company's skull caps rose from the 19th most popular item on the Web site to No. 2 within weeks, Battista said. The most popular colors? Maroon and gray -- the colors of the series' fictional team, the Cougars.

"In television advertising, you know exactly what you bought and when it will run," Battista said. "Product placement is an entirely different game. You can make sure you can put your brand in a good place so it has a chance to get in, but you have no control over whether it ultimately winds up on the cutting room floor."

Under Armour comes away as one of the "Dodgeball's" biggest product placement winners. The two minutes, 35 seconds of exposure -- mostly seen on the purple undershirts of Goodman's "Globo Gym" team -- has equaled more than $750,000 in equivalent advertising time, according to Joyce Julius & Associates.

How much the exposure will mean to the upstart brand, which sold $115 million worth of product last year, is not clear, since Battista said the company has no plans to make jerseys inspired by the movie.

An upcoming starring role for the brand will be seen in "Mr. 3000," starring Bernie Mac, whose character comes out of retirement when some of his hits are disallowed, dropping him below the 3,000-hit mark. Another is "Clubhouse," the CBS fall series starring Dean Cain that follows a 16-year-old batboy for a pro baseball team.

A select amount of Nike swooshes can be seen in "Dodgeball," most notably on the character of Gordon, played by Stephen Root, the actor who gained fame for his portrayal of Milton in "Office Space."

Nike is extremely active in the product placement world, with its brand appearing in movies such as "Forrest Gump," "Jerry Maguire" and "The Rookie." Nike had a starring role in "What Women Want," when Mel Gibson's character is charged with developing a commercial for a line of women's shoes.

"Nike works with studios and films only if there is a positive, logical connection to the brand," Nike spokesman Nate Tobeckson said. "If the film is centered around or involves elements of sport or youth, then it is very natural for the Nike brand to appear."

Although exposure is never guaranteed, the cost is so minimal that the in-house marketing arms of the smaller companies, like Under Armour and Urban Golf Gear, a lifestyle brand that tallied $400,000 in sales last year, are being particularly aggressive in order to match the exposure of a company the likes of Nike, which generates $10 billion in annual sales.

In the past three years, Urban Golf Gear has been on 15 television series on various networks, including ABC, Fox, HBO and MTV, and can be seen in four movies, including "Malibu's Most Wanted" and "Two Can Play That Game."

Urban Golf Gear's founder Craig Tanner saw the benefits of product placement based on the success in "Two Can Play That Game." Movie producers actually bought the gear from Tanner's company for a scene where comedians Anthony Anderson and Alex Thomas are on a golf course. Both are wearing shirts with the company's logo, a golfer with dreadlocks swinging a club.

"The exposure from that never ends," Tanner said. "I hear someone say something all the time. Our sales went up when the movie came out, when it hit pay-per-view, when it went to DVD and to video. Then HBO started playing the film like crazy.

"It's not rocket science. The bottom line is Tommy Hilfiger put some stuff on Snoop Dogg (for a Saturday Night Live skit in 1994) and all of the sudden sales took off."

Urban Golf Gear will soon be on Samuel L. Jackson's character in "Coach Carter," a film about the coach who made headlines for benching his entire undefeated high school basketball team for bad grades.

"Companies have to be careful about their approach," said Eric Dahlquist of The Vista Group, a product placement firm that structured the deal with Columbia TriStar worth at least $15 million for its client Mercedes Benz to have its E-Class car in "Men in Black II." "Companies are usually in films to convey some sort of authenticity. So you don't want a lot of people talking about how aggressive you are to get in films because you hope that the audience believes you are there because you are the hot brand."

Of all the products and brands seen in "Dodgeball," only ESPN is doing a quick turnaround based on its exposure in the movie. In the film, the dodgeball matches are seen on ESPN 8, nicknamed "The Ocho," while a cheerleading contest is on Fox Sports.

ESPN and Fox did not pay for the exposure. Officials merely gave the producers the go-ahead to use the company names. ESPN will roll out an ESPN 8 "The Ocho" hat and shirts that are scheduled to be available by the end of this week.

While the financial benefits of product placement are unclear, the method continues to be effective, judging from the proliferation of the advertising, as well as the reaction from watchdog groups that have become concerned with placements by tobacco and alcohol brands in movies that target youth.

When Vince Vaughn's character, Peter LaFleur, rallies his troops to compete in the dodgeball tournament, he hands out bottles of Budweiser. Later in the movie, a neon Bud Light sign hangs in the background during a bar scene.

"Alcohol product placement gives young people a positive perception of alcohol and drinking behavior," said Aman Rappaport, community director for the Marin Institute, an alcohol industry watchdog, which has openly criticized Anheuser Busch's role in the PG-rated film. "Considering that alcohol, and especially beer, is the No. 1 drug of choice for underage youth in the United States, isn't it time that the alcohol industry stopped serving teenagers with beer ads in movies?"

"The characters in the movie are of legal drinking age, and those shown drinking our products do so responsibly," said John T. Kaestner, the company's vice president of consumer affairs.

If tobacco and alcohol sponsors are somehow pressured to drop out, movie executives need not worry. The future White Goodmans of the world will likely have plenty of offers to drink a host of other beverages.