Two years ago, Rosemary Curtiss wanted her husband to get out of the T-shirt business.

"I told her that as long as Auburn and Alabama, and Michigan and Ohio State play each other every year, everything is going to be just fine," said Wayne Curtiss, the founder of Smack Apparel, a maker of parody T-shirts. 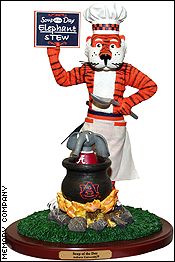 The business surrounding college football rivalries is growing bigger every year -- a confirmation that fans just love to hate their rival schools. This year, 114 companies will be making licensed rivalry products, according to the Collegiate Licensing Company, which manages the marks of more than 180 colleges and universities.

Auburn fans who love to hate Alabama can buy a figurine of their hefty tiger mascot Aubie strangling a wimpy Al, Alabama's elephant mascot. Oregon State fans might prefer the figurine with a hefty Bennie Beaver playing keep away from three puny University of Oregon players. And Ole Miss fans can enjoy Rebel making "Soup of the Day," which of course features Mississippi State's bulldog sitting in a black kettle.

As the business has grown, school licensing directors have been faced with the challenge of walking the fine line between getting a cut of the sales and not degrading their mascot. While references to drugs, alcohol or violence are pretty much out at all institutions, licensees have been pushing schools to be more risqué, knowing that fans love items that take shots at their rivals.

"We have companies that submit designs that are a little over the edge, but we tell them that if they twist something or take something out, we'll approve it," said Debbie Maddix, licensing manager at the University of Florida. Maddix has approved alligators being choked and run over with tire tracks on its back.

Memory Company, which makes the rivalry figurines, usually offers four or five different design options on each rivalry product since licensing directors are so scrutinizing.

"It's the toughest item we do because they reject a whole lot more than they approve," said Charles Sizemore, chief operating officer of the Memory Company, which generates 5 percent of its annual sales from rivalry items. Recently rejected items include a figurine with a mascot hunting its rival mascot. Both versions, one that involved a gun and another that included a club, were "shot down within five seconds," Sizemore said.

This week, Tiger Rags, a T-shirt producer in Auburn, Ala., will sell thousands of shirts for the Alabama game. The shirt features Aubie spanking little Alabama elephants, with the phrase "Who's Yo' Daddy" on it.

Charlie Gross, part owner of Tiger Rags, said the company's great relationship with the university makes it easier for designs to get approved. "We'll go as far as they let us go," Gross said. Earlier this year, the company's shirt for the Louisiana-Monroe game said "Pull My Finger" on the front and "Blow Them Away Big Blue" on the back.

"I was surprised that one got through," Gross said.

Susan Smith, Auburn's director of trademark management and licensing, said she'd prefer rivalry items to be funny and corny than malicious. If there's one rule with the licensees making Alabama-Auburn licensees, it's "keep the blood-and-guts thing out of it."

"People take this game so seriously it's ridiculous," Smith said.

Since both schools have to approve a licensed design, Gross said he's happy that Alabama is fairly liberal with artwork that demeans its mascot. This year, Tiger Rags didn't do shirts for the games against Ole Miss and Mississippi State because their licensing departments are usually so hard to deal with, Gross said.

For those who want to try to skirt the licensing issue, there are unlicensed vendors like Curtiss, who doesn't use school trademarks, but claims to be "licensed by the first amendment."

Odds are that Michigan wouldn't approve the shirt made by Curtiss that will be sported by some Ohio State fans this week: "Whoop Michigan. And the dumb lookin' Varmint they brought with 'em." Other Curtiss creations fans might see this week include "Lose Carbs. Eat Tiger. Remember, it's ATKINS friendly!" in Tuscaloosa, and "Beat Texas ... And the steer they rode in on!" at the UT-Texas A&M game in Austin.

The business of rivalries is expected to grow in the coming years. More and more games, especially in the Southeast, are considered greater rivalries in the licensing world, according to Kit Walsh, senior vice president of marketing for CLC. The company has a large licensing task force that seizes merchandise from vendors who illegally use university trademarks without permission.

Walsh said every big rivalry game includes a couple busts, including virtually every variation with the word "sucks."

Popular new rivalry items include license plates with the state's two rivals schools on them along with the phrase "A State Divided" and Collegiate Crushers, rocks that have a school logo painted on the front face and a squashed football player wearing the rival colors underneath it. Last week, Randy Valicoff, a farmer in Yakima, Wash., started selling apples branded with Washington and Washington State's logos for the rivalry between the Huskies and Cougars dubbed The Apple Cup. On Monday, Valicoff told ESPN.com that, even at a retail price of $6 an apple, the few thousand he had made were gone at every retailer he sold them to.

But T-shirts are still the bread and butter of the business.

Mike Rupp, founder of Ruppshirts, makes more than 100 licensed T-shirts that jab at opposing schools. That's about 40 percent of his total offering.

"Doing this is a no-brainer," Rupp said. "And I think the licensing directors at the schools realize that someone will buy one 'University of Georgia: Since 1785 shirt,' but they'll buy three shirts every year for each of the rivalries."

Rupp's creations should be all around Tallahassee this weekend, since that's where his company is based and the Gators are playing Florida State. This year, he'll be selling to both FSU and Gators fans. One shirt offers "Fresh Tender Gator By The Pound," while another says, "The best things in life are free. The worst things are Noles."

The rivalry business is also a healthy one because hardcore fans of the winning team usually want to buy a T-shirt that boasts the score. Since it's such a quick turnaround the basic score T-shirt designs for rivalries -- without the scores, of course -- are typically approved during the early summer.

Rupp's best score shirt success came 10 years ago when the Seminoles, down by a wide margin, came back and the game ended in a 31-31 tie. Rupp made a shirt with Florida's Gator mascot strangling itself with a tie. The shirt said, "Hey Gators, Nice Tie!" and "The Choke at Doak."