Dorothy Hamill: "When I started skating at 8 years old, I thought I'd never experience the thrill of winning a medal. With all the great memories has come another thing I never thought I'd experience -- the pain of osteoarthritis." 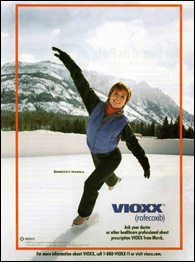 Voiceover: "Vioxx is here. ... With one little pill a day, Vioxx can provide 24-hour relief."

Since the U.S. Food and Drug Administration's 1997 decision to permit pharmaceutical companies to market prescription drugs to the masses, scores of sports figures have signed on to endorse a variety of pills, ranging from allergy medication to pain relievers and more. The partnership has been lucrative for the athletes, with upwards of $4 billion spent annually on advertising by drug companies, as well as for the drug makers, which have seen profits soar with the new-found marketing ability to attach familiar faces with their products.

Even the very endorsement of athletes who never claim to use the products, as drug makers have found, can alleviate the stigma associated with some ailments. Major-leaguer Rafael Palmiero, NASCAR driver Mark Martin and former NFL stars Mike Ditka and Tony Dorsett have attached their names to awareness campaigns for erectile dysfunction, but only Palmiero and Ditka have acknowledged in advertisements that they have prescriptions that treat the condition in their medicine cabinet.

Though the alliance between athletes and pharmaceutical companies has become commonplace, leading health experts chide athletes for not exploring possible risks before they endorse medicinal products. At stake, they warn, are the very lives of consumers.

"The people that do these commercials and do these promotional campaigns, they are just interested in selling the drug," said Dr. Eric Topol, department chair of cardiovascular medicine for the Cleveland Clinic and an opponent of consumer marketing of prescription drugs. "They are not interested in the science of what is behind the drug."

In an article for the Journal of the American Medical Association three years ago, Topol called attention to the health risks of Vioxx, an arthritis drug endorsed by former Olympic champions Hamill and Bruce Jenner.

Merck, which makes Vioxx, announced a "voluntary withdrawal" of its drug from pharmacy shelves seven weeks ago after company officials said new research indicated it increased the risk of heart attack and stroke. Topol said he believed Vioxx may have caused as many as 160,000 heart attacks and strokes. In Capitol Hill testimony Thursday before the Senate Finance Committee, a veteran FDA researcher estimated that the drug has contributed to as many as 139,000 cardiovascular events. One thing that's for certain: With two million people taking Vioxx, it is the largest prescription drug recall in U.S. history.

"Dorothy (Hamill) is not a scientist and I'm not a scientist," said Jenner, who was paid to make media appearances to promote Vioxx and to deliver speeches at Merck sales meetings. "We had no idea what was happening behind the scenes. They never told us."

That is a common refrain among athletes interviewed by ESPN about their knowledge of the pharmaceutical products they are paid to pitch.

"I don't think that [the merits of a drug] is an athlete's responsibility," said Retton, the former Olympic gymnast who endorses Detrol LA, a drug made by Pfizer to treat overactive bladder. She was at a Cincinnati mall in October, a stop on her touring of the country for the drug maker's "Life Beyond the Bathroom" campaign. "My job, and why I teamed up with Pfizer, is to help people. And to get information out about this condition."

But Dr. Sidney Wolfe, director of the health research group for Public Citizen, a consumer watchdog group, says it is incumbent upon the athletes to research the safety of the products they are paid to pitch to their fans.

"Dorothy Hamill was enlisted -- at, I'm sure, a great financial benefit to her -- to help sell Vioxx," Wolfe said. "And when Dorothy Hamill went on and sold Vioxx she didn't say, and the company may not have told her, 'I'd like you to use Vioxx even though there is a four-fold risk of a heart attack when you use Vioxx.' "

Hamill did not respond to interview requests, but Merck issued a statement to ESPN that claimed its "marketing efforts were appropriate based on all available clinical and scientific data." On Thursday, Merck chief executive officer Raymond Gilmartin told members of Congress that "In fact, my wife was taking Vioxx ... up until the day we withdrew it from the market."

A review of Merck's internal e-mails cited in a Wall Street Journal report earlier this month suggest that company officials knew of Vioxx's health risks as early as March 2000, five months before signing Hamill and Jenner to endorse the drug.

The Securities and Exchange Commission is now investigating Merck's conduct; the U.S. Department of Justice has launched its own investigation; and more than 300 personal injury lawsuits, involving as many as 60,000 people, have been filed. Jenner and Hamill are expected to be deposed and could be listed as defendants in some cases, according to Michael Papantonio, a Pensacola, Fla., attorney who organized a conference that attracted 650 litigators with clients contemplating lawsuits against Vioxx.

"It's extremely unlikely that Dorothy Hamill will ever have to pay out money in these cases, but there's no way she's going to skate through this without being affected," said Papantonio, who expects to file a class-action lawsuit against Merck on behalf of approximately 2,000 former Vioxx users.

"I think the cop-out by individual athletes or professional associations is 'If it's good enough to be approved by the FDA, it's OK by me,' " Wolfe said.

"It would not be difficult for any athlete to find out through the Internet or elsewhere where serious questions have been raised about a drug or product that they are endorsing," he said. "And to not do that, to put your name on something that you are not fully informed about, is a serious breach of ethics."

One Web site, created by Wolfe's organization, is www.worstpills.org. In addition to Vioxx, Crestor, a drug that controls high cholesterol, is given prominent mention for its "new evidence of kidney failure," according to the Web site.

Crestor maker AstraZeneca spends millions of dollars to advertise in the sports world, and in March signed a reported $30 million sponsorship deal with the PGA Tour. Through its Crestor Charity Challenge, AstraZeneca gave away $2.7 million to charitable organizations in 2004 in the names of PGA Tour players.

But in a letter to the FDA in October, Wolfe wrote that the rate of kidney damage among Crestor users is 75 times greater than the damage caused by all its competitors combined. "The golfers have never been informed that this drug is uniquely dangerous and therefore, like many other athletes who are promoting drugs, they are victims," Wolfe told ESPN.

Crestor was among five drugs that a veteran FDA safety officer warned during Thursday's Senate hearing that have dangerous side effects. The others he listed were the weight-loss drug Meridia, the painkiller Bextra, the acne medication Accutane and the asthma medication Serevent, none of which have an athlete endorsement tied to it.

Kenny Perry, a PGA Tour player who says he has had success in controlling his cholesterol with Crestor, endorses the drug and recently spoke on behalf of the company during National Cholesterol Awareness Month in September. Until he was approached by ESPN, though, Perry said he was not aware of criticism leveled against the drug.

"I don't keep up on the drugs," Perry said. "I don't try to see the side effects and the negatives with the drugs or anything. I can only do what my doctor has told me and then try it, and then if there is a problem, if my face is with it and there's a problem, I can honestly look at you and say, 'Well it didn't effect me. I didn't have a problem with it.' "

He added: "I'm not trying to lead people, or the public, in a wrong direction here."

In a statement to ESPN, AstraZeneca said "Crestor is safe and effective when used as directed," and that "claims to the contrary are factually incorrect and misleading." The PGA Tour also released a statement: "Crestor is an FDA-approved drug, which achieved that status after such testing as the FDA deemed necessary. Sidney Wolfe's personal opinions have no impact on our agreement with AstraZeneca."

Though critics on Capitol Hill pointed to the FDA's ability to review and approve new drugs, Topol, whose JAMA article was the harbinger of controversy to come, wonders what the regulatory agency has wrought with its marketing ruling seven years ago.

"I do think that one of things we are going to learn is that direct-to-consumer advertising created a monster here," Topol said.

Said Jenner, the former pitchman for Vioxx: "The bigger question is, should these things be on the air in the first place. The marketing has been effective, but whether it's the right thing to do, maybe we should take another look at that."