The NBA is actually allowing its players to go postal.

The league has signed a licensing agreement for 30 of its players to appear on stamps made by the Inter-Governmental Philatelic Corporation (IPGC), a New York-based stamp producer that makes commemorative stamps for more than 50 nations.

Many of the stamps will be sold in the United States as a collectible -- one dealer was selling single-player stamps for 95 cents -- while others can be used in the specific country represented. The six nations that are lending their name to the project do so since sales can contribute to the country's bottom line. 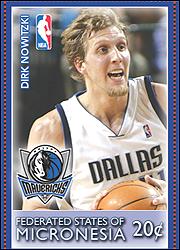 In the last 15 years, IPGC has produced stamps of current and former boxers and Major League Baseball players. In 1990, the island nation of Grenada removed Pete Rose from its circulation after he was banned from baseball for betting on games.

No current NBA players can be featured on a U.S. stamp, since subjects have to be deceased for at least 10 years. In August, the U.S. Postal Service will debut its stamp featuring tennis great Arthur Ashe, who passed away in 1993.