IN JUNE, I wrote about a game called featherbowling played on the east side of Detroit. It's a long story.

When you win the grand championship in featherbowling, they hang your portrait above two dirt trenches in the back of a bar at the corner of Waveney Street and Cadieux Road. The bar is a realm unto itself. It was once a speakeasy, and once a meeting place for the region's pigeon breeders. 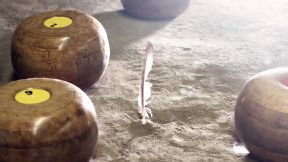 The most iconic of the featherbowling portraits was of former grand champion Steve Gosskie, who became terminally ill after claiming the league title.

His portrait was stolen almost two years ago and hadn't been seen since.

When the story came out on June 18, I got messages from Gosskie's old friends. Steve was "the one to call if you are stranded in 3 feet of snow somewhere in hell," one wrote.

He was old Detroit. He lived with a mutt named Weezie in a 19th-century farmhouse down the street from the Cadieux. He was once a blacksmith. Sometimes when he bowled, he wore a stovepipe hat.

He never locked his doors. He saw only the best in a city so many had left for dead. By the time I met him, he was in his mid-40s. He watched his portrait unveiled on opening night of the next season, knowing he didn't have much time left. It was September 2013. By December, his portrait was stolen. He was going through endless rounds of chemotherapy at the time.

Interspersed with the notes from Steve's old friends, there was a message from a law student at Wayne State University named Jeffrey Lambert.

"I think I may have been present the night this portrait was stolen. I was playing a round with some buddies of mine, and on the other lane were about eight or so people visiting from Canada," he said.

Erik Greer, the reigning featherbowling grand champion, reached out to tell Lambert he shouldn't feel bad. Greer always said, "We just want it back." He believed the portrait was just across the border in Windsor, and he was a hatching a scheme to get it back when I received a short message from what was clearly a burner Gmail account: "I can get you the painting. ... Will you make sure it gets back safely?" The name on the account was Steve Madden.

The emails I sent back went unanswered. I kept emailing. "Be encouraging," a contact I know at the Royal Canadian Mounted Police told me. "Tell him there's the potential to make a lot of people happy. If he feels threatened, he's going to dump the painting and the trail will disappear."

By mid-July, I was in the process of moving, and on my last day in the building, I found a note in my mailbox. There was a package at the post office. It was wrapped in crumpled brown paper held together with Scotch tape.

The edges of the frame were neatly packed.

It was the original portrait. Gosskie and his stovepipe in all their glory.

I wanted to call everyone I knew in Detroit. I wanted to call all the featherbowlers -- Greer, Marc Tirikian, Michael Chateau, Paul Misuraca and Ron Devos. Above all, I wanted the artist, Jerry Lemenu, to know we got it back.

I was heading out on assignment to Pittsburgh. I could get a bus from there up to Detroit. Hand-deliver it.

On a connecting flight from Minneapolis to Pittsburgh, I snuck the painting between my knees, scared to let it leave my sight.

"You can't have that there," a flight attendant said.

She had big eyes and a soulful Southern accent. "I'm going to take good care of it," she said. As the rest of the plane boarded, I told her what was inside. She began politely moving passengers. There was one empty seat on the entire plane. When she was done, that empty seat was beside me. She sat the portrait down and buckled it up. "Do you think he's comfortable?" she asked.

Thirty minutes after takeoff, the pilot announced the plane had to turn around and return to Minneapolis. The pilot referenced an "air bleed." This was how Steve's life went. And so went his journey home. In Pittsburgh, he had breakfast at Primanti Brothers. And then he was on a Greyhound between Pittsburgh and Akron. And a Greyhound between Akron and Youngstown. And a Greyhound between Youngstown and Cleveland, where one of his good friends met me. We drove to Detroit. I offered to show him Steve's portrait. He politely declined. He wanted to see it when everyone else did. None of them knew we had it. Lemenu was the first to arrive.

In the moment he saw the portrait for the first time in almost two years, Lemenu talked about how it had aged. His best friend, Chateau, almost fell over when he saw it. Greer arrived and phoned his mom. "Guess what I'm sitting beside?" he said. Then he phoned Steve's mom. "Your son has come home," he said.

The featherbowlers paraded the portrait from Roma Cafe to the Detroit City Distillery to Nancy Whiskey.

They put out drinks for Steve in front of his painting at every stop.

When I left, they were talking about opening night of the season, and how this would be the biggest one ever.

Chris Koentges is a writer based in Vancouver, British Columbia.