It took only about a mile for Tisheata Stallings to travel from helpless to hopeless.

Trapped by Hurricane Katrina's floodwaters in New Orleans' Lower Ninth Ward, the 22-year-old recent college graduate, her mother and a cousin were plucked from their second-story roof by a small boat that ferried them to the nearby Almonaster Avenue Bridge. Stallings climbed out of the rickety craft, trudged up the bridge and looked down the other side for salvation.

Instead of the familiar contour of much-traveled road, more deadly water stretched as far as her eyes could see. "In that immediate instant," Stallings recalls, "I lost complete hope."

• Ryan Cortes on the "right way" to play baseball. By Ryan Cortes
• The spirit of the Negro Leagues Lives on in these Small Towns By Ryan Cortes and Justin Tinsley
• Name change inevitable for Washington's NFL team By Mike Wise

Many of us, watching impotently from home, took that same short trip from helpless to hopeless 10 years ago, when Katrina exposed the United States of America as unwilling and therefore unable to protect its black citizens from disaster. As we watched so many of us wading past corpses, begging for rooftop rescues and suffering in the apocalyptic Superdome, this sense of powerlessness often boiled down into anger, bitterness and despair.

Black Lives Mattered deeply to us, and to many white people who joined the Samaritan brigades that did everything from searching for bodies to simply paying for a fleeing family's tank of gas. Action was our salvation. That it came voluntarily, from millions of hearts, without taxation or coercion, made it more uplifting. What the most powerful nation on earth could not do for its alleged own as it launched million-dollar missiles in a trillion-dollar Iraq war, we did for ourselves.

Still, the despair lingers, even after a momentous decade, the memory of Katrina magnified by the persistence of inequality.

The progress of a first black president, princess or Super Bowl coach is offset by the weight of a growing racial wealth gap, devastating violence in black neighborhoods, and continued police killings of unarmed black people. New Orleans rebuilt itself from Katrina's destruction, the nation rose from the Great Recession, yet African-Americans remain walled off from both recoveries.

"Change has come to America," President Obama proclaimed three years after Katrina, on the night of his improbable triumph as the embodiment of hope. Yet hopelessness creeps back as we still -- 10 years, 50 years, 150 years later -- try to secure equal footing in our nation.

"Police profiling and police brutality, Trayvon Martin, Michael Brown, Eric Garner and all these events occurred across the country to, again, raise the question of, 'What is the value of black life?'" observes Darnell Hunt, director of UCLA's Ralph J. Bunche Center for African American Studies.

This is our journey, our struggle, which Katrina etched into stark relief. And as a landmark disaster for the black community, Katrina also reveals that our struggle is against more than racism and police killings. It's against anger, bitterness and despair -- against internal obstacles that blind eyes and harden hearts.

"We're talking about individual high-profile cases as opposed to this collective disaster that we saw in Katrina 10 years ago, but I think the feelings are very similar," Hunt says. "The question is, 'What place do we have as a people in this society? Does our life count for the same thing?'"

Ten years after Katrina, we struggle for hope.

"I don't know if America has changed that much since then," says the Rev. Ronald E. Braxton of Metropolitan African Methodist Episcopal Church in Washington, which sent Katrina victims a planeload of diapers, food, water and supplies, plus tens of thousands of dollars in donations. "Look at the incarceration of black men, look at the penal institutions. Here we are in 2015, public education is horrible. These are all signs that we are still a racially divided people."

After Obama was elected in 2008, a New York Times poll showed just 30 percent of black people felt that race relations were generally bad. This past July, a month after an apparent white supremacist allegedly killed nine black worshippers inside a church in Charleston, South Carolina, that pessimistic figure had increased to 68 percent.

The most celebrated exploration of the black experience in years, Ta-Nehisi Coates' new memoir "Between the World and Me," paints a bleak landscape of "specious hope" for racial progress. Coates advises his young son to struggle for himself and his family -- but not for change, because Coates believes racism is a foundational, indelible aspect of America.

Toni Morrison calls Coates the heir to James Baldwin, who, in 1964, as Negroes braved billy clubs, dogs and fire hoses as they demanded equal rights, wrote: "What is ghastly and really almost hopeless in our racial situation now is that the crimes we have committed are so great and so unspeakable that the acceptance of this knowledge would lead, literally, to madness. The human being, then, in order to protect himself, closes his eyes, compulsively repeats his crimes, and enters a spiritual darkness which no one can describe."

That spiritual darkness hits black people with a wave of suspicion. As thousands desperately sought food, water and shelter amid Katrina's floodwaters, some black people were described as "refugees" and "looters," in contrast with white "victims" who were "finding" food. Five police officers still face trial in the shooting or killing of six unarmed African-Americans on the Danziger Bridge. In the white enclave of Algiers Point, three black men trying to leave the city were shot on sight. 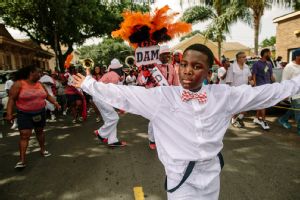 James Rucker, at the time a young political activist from San Francisco with family in Louisiana, felt the despair and anger as he watched the suffering from afar. Then he thought, "We can turn that."

"Things take time. We're not going to flip a switch and everything's going to change," Rucker observes. "We can actually make change, if we fight and we persist and we stay smart and stay engaged, over time."

To create this change, Rucker relies on a belief that has sustained our struggle for centuries, that has fueled freedom fighters from Harriet Tubman to Martin Luther King Jr., that leans on a spirit simultaneously manifest and hidden:

Without faith, whether it be in a higher power, a long moral arc that bends toward justice, or the inexorable progress of humanity, there would be no reason to struggle. Without faith, progress would never be achieved. And there would have been nothing to fortify Tisheata Stallings as she confronted the floodwaters on both sides of the Almonaster Bridge.

"On that bridge, I didn't know what was coming, what would happen, but I knew I couldn't break down, for my mother," she remembers. "I had to tell myself something was going to happen, that we would make it out. Even if it was a lie, I had to keep telling myself that."

As night fell, with no food or water, Stallings, her mother and a cousin found an abandoned car on the bridge, which they used for shelter. Over the next 24 hours, they watched helicopter after helicopter pass overhead. Finally, help arrived, not via a Coast Guard boat or Army aircraft but in the form of a man paddling an upturned refrigerator.

The three family members used the refrigerator to float the mile back to their house, where an aunt and cousin were still trapped. A larger boat arrived and took them all to the hellish convention center. Determined to escape the filth and mayhem that could have been the setting for a horror movie, one of Stallings' cousins stole a truck, and the family fled to Atlanta.

Now 32, Stallings is back in her native New Orleans, teaching middle school English. She remains convinced that race played a role in the fatally ineffective response to Katrina. She supports the Black Lives Matter movement but wishes it also would focus on stopping young black males from killing other young black males.

And she has a 7-year-old son, which gives her hope.

"They will be the generation to take our country and our world where it's supposed to be," Stallings predicts. "Because those babies don't see color. They don't care. They love each other."

"That's what I'm hopeful for."

Ten years later, more black death has reopened our eyes to the reality that was briefly obscured by the unexpected advent of a black president. We hoped that Obama meant change for black people. We should have known that faith belongs not in politics but in us, where we can use it to see beyond the despair.

We have seen our people dead in the streets, felled by flood and neglect, by police and by our own young black men. Now, what will we do?

The memory of Hurricane Katrina says action will be our salvation.

With additional reporting by Jerry Bembry and Ryan Cortes.