From its origins on sideshows and vaudeville stages, pro wrestling has been a rugged variety show, and that was never more apparent than at WrestleMania, where WWE throws together a zany mix of brutality, showmanship and Fourth of July celebration to craft an extravaganza that hopefully makes fans of all ages go wild.

Of course, every type of fan isn't cheering at the same time, but that's OK -- there's a little bit of something for everyone. Sunday's WrestleMania 32 in Arlington, Texas, was no exception.

Let's look back at the highs and lows, and examine the elements of showmanship that WWE put together to build its biggest show in history.

WrestleMania is known for its feel-good endings, and despite the fact that Vince McMahon had one planned for this one (more on that later), it fell short. But there was an amazing feel-good moment at the start of the show, when the illustrious Hall of Famer Lita came to the ring to unveil the new WWE women's championship belt, a formal abdication of the Divas title -- which was always somewhere between cartoony/obscene and entirely embarrassing. 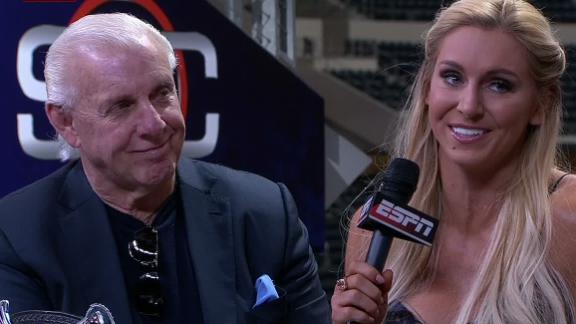 The new belt is a variation on the men's world heavyweight championship and the symbolism couldn't have been clearer that the women are now on par with the men. But we hardly needed a new belt to tell us that after the last year. It's nice to know that WWE knows it, though. When Charlotte entered the ring with the Divas belt on and left with the women's championship, it wasn't the changing of the guard that many fans were hoping for (her opponents, Sasha Banks and Becky Lynch, were the "good guys," after all), but it signaled a shift toward a better future for women's wrestling -- and wrestling in general.

WWE was low on star-factor at this year's WrestleMania. Gone are the glory days of Muhammad Ali, Liberace and Bob Uecker. The closest thing we saw in 2016 was a live performance of WWE Hall Of Fame inductee Snoop Dogg rapping while his cousin, Sasha Banks, walked down to the ring. But in the Andre the Giant Memorial Battle Royal, WWE called back to the days of William "The Refrigerator" Perry versus Big John Studd when it put Shaquille O'Neal in the ring and had him stare down The Big Show. There have been rumors about a Shaq-Show match for years, and it's hard to imagine them pulling it off in their mid-40s. But a few minutes of a giant-versus-giant showdown in the midst of a battle royal was worthwhile.

A segment that appeared to feature Dwayne "The Rock" Johnson returning to WWE as a mere functionary -- to announce the record-breaking attendance of 101,763 (although honest estimates put the number closer to 98,000) -- became a WrestleMania storyline-in-miniature. The Rock hyped up the crowd and was confronted by the Wyatt Family, who had been conspicuous in their absence throughout the night. 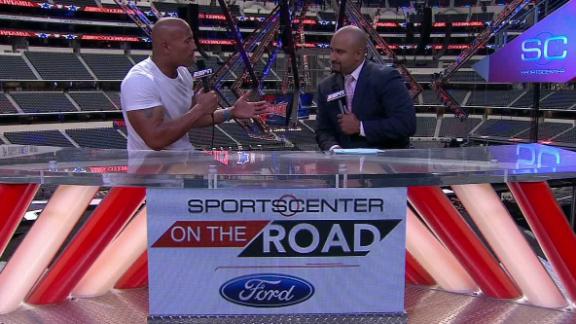 Jonathan Coachman sits down with Dwayne "The Rock" Johnson to talk about his past WrestleMania matches with Hulk Hogan and John Cena. Watch

When the numbers appeared stacked against him, The Rock was bailed out by his two-time WrestleMania opponent, John Cena, who had reportedly been ruled unable to perform. (Never underestimate Cena's recuperative abilities. He's somewhere on the recovery scale between German platelet-rich plasma therapy and Deadpool.) More importantly, it was the heroic saves-the-day scene that all the kids in the building needed in an evening full of disappointment for their heroes.

Pro wrestling is a world full of surprising twists and turns, to the point that they're almost easy to predict. But on Sunday, the biggest shocker of the night actually came in a surprising spot -- Zack Ryder winning the Intercontinental championship. The ladder match was seven wrestlers deep, and was anchored by a feud between defending champ Kevin Owens and his pre-WWE adversary Sami Zayn. But neither of those men escaped with the belt, nor did Dolph Ziggler, who was arguably the highest-profile competitor in the bout. Instead, it was Ryder, who has long been a sentimental favorite of the smart-fan set, although he has been closer to a punchline than a headliner in recent years. He was included in the match seemingly as a replacement for the injured Neville, so almost nobody predicted he'd win. But sometimes there's surprise for surprise's sake. Just 24 hours later on Monday Night Raw, Ryder dropped the belt to The Miz, another of the competitors in Sunday's melee -- and a much more logical choice as champion.

After The New Day lost to The League of Nations, the easily boo-able foreign foursome was gloating in the ring. In wrestling parlance, this is the classic solicitation for a good-guy patriotic rejoinder, and WWE did not disappoint. The League met its match with the legendary trio of "Stone Cold" Steve Austin, Mick Foley and Shawn Michaels, who joined forces to toss the villains out of the ring and celebrate in a shower of beer suds, just like Austin routinely did in his heyday. The beer, the finishing moves, Michaels' astounding physique -- for a few minutes, it was as if we had gone back in time. For a show like WrestleMania, a flashback to the glory days is always a welcome addition.

Of course, those three were far from the only flashback players on the show. In the semi-main event, Shane McMahon returned from a six-year absence to face The Undertaker in a Hell in a Cell match. They did everything they could to make their going concern -- nominally a board room battle over control of Monday Night Raw -- feel like a remembrance of all things Attitude Era. These two icons of the '90s and early 2000s battled in and out of the cage, crashing through walls and tables as the crowd cheered along to the hits like fans at a Lynyrd Skynyrd reunion show. The most important thing they did, though, was to give WrestleMania 32 -- in an era depleted of stars -- its one real moment. 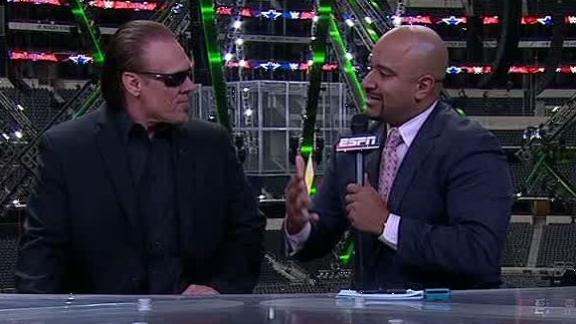 WWE Hall of Fame inductee Sting explains the injuries that led to his decision to retire and looks back at his WrestleMania moment in 2015. Watch

The most famous (and ghastly) moment in Hell in a Cell history was when Mick Foley was thrown off of the roof and onto an announce table by The Undertaker in 1998. At the end of the match on Sunday, Shane climbed to the top of the cage and willingly threw himself off onto his opponent, who was laid out on the announce table below. But 'Taker dodged him, sending McMahon 20-plus feet through the table all by himself. It seemed as if nothing could top the reaction Shane got when he returned a month ago, but he might have topped it with the craziest X-Games freefall I've ever seen. In a WrestleMania light on swerves, this was a moment fans will never forget.

If there's something fans would like to forget, it's likely the main event. WWE did everything it could do to make Triple H the villain in this feud, capping it off by having his wife, Stephanie McMahon, introduce him with an anti-fan monologue while dressed as Tina Turner in "Mad Max Beyond Thunderdome." It didn't work. WWE started building Roman Reigns as the next great hero of the company about 18 months ago, and in that time has achieved the exact opposite: Reigns is the most despised wrestler WWE has had since it turned Sgt. Slaughter into an Iraq-sympathizing traitor in 1990. Honestly, that's nothing to sneeze at, even if it happened by accident. Reactions like Roman received from the crowd at AT&T Stadium on Sunday are priceless in the wrestling business. The problem is, WWE seems determined to ignore the reaction entirely, choosing instead to mute the crowd mics than to embrace its new despicable star. 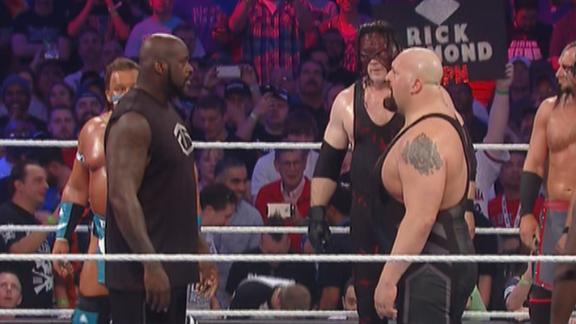 Shaquille O'Neal competes in the Andre the Giant Memorial Battle Royal at WrestleMania 32 and makes his presence known. Watch

It probably says a lot about the modern era of wrestling fandom that the only way to successfully create a bad guy is to pretend you're creating a good guy and wait for the fans to revolt. But it says even more about a company that sometimes can't get out of its own way. (It also didn't help that the match didn't even start until after 11 p.m. ET, when everyone expected the show to be over, so the crowd was cranky.)

But in the modern WWE, this is the act in the variety show we've all grown accustomed to: the Vince McMahon special. No matter what's going on, no matter how the crowd reacts, we're going to get the big heroic victory shoved down our throats, whether we like it or not. It's a pity, though. When the main event started, and Roman was getting booed relentlessly (even the girl behind me with the "Reigns Will Reign" sign gave up cheering for her guy), Roman and Triple H exchanged a series of moves that, if you go by conventional wrestling logic, painted Triple H as the hero and Reigns as the heel. For a moment, anyway, it felt like we were watching something real happen before our eyes -- an actual, live character evolution. But in the end we got the cookie-cutter ending we were all expecting. 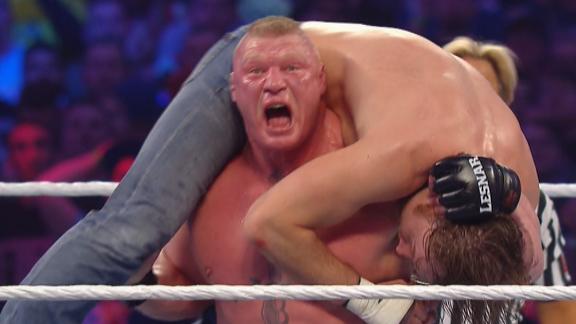 Brock Lesnar hits Dean Ambrose with an F5 over a pile of steel chairs during their No Holds Barred Street Fight at WrestleMania 32. Watch

There was one other big match on the card ... Brock Lesnar versus Reigns's buddy Dean Ambrose in a No Holds Barred Street Fight. The two were conspicuously absent from much of the WrestleMania branding around Dallas (Reigns-Triple H, Shane-Taker and Charlotte-Sasha-Becky got the top billing), which seemed odd considering Lesnar's crossover appeal. But maybe it wasn't so weird if they knew that the match they put on would only amount to misdemeanor battery, which was a huge letdown considering the men involved and the constant tease of artillery in the build-up. The chainsaw didn't work, the ring steps were hardly a factor and the barbed-wire baseball bat was a swing and a miss. It was the match that finally put the lie to the Chekhov's Gun principle -- they introduced a sea of weapons and managed to use approximately two. Call it the Foley's Bat Theory: some teases are so powerful that they can only lead to a letdown. 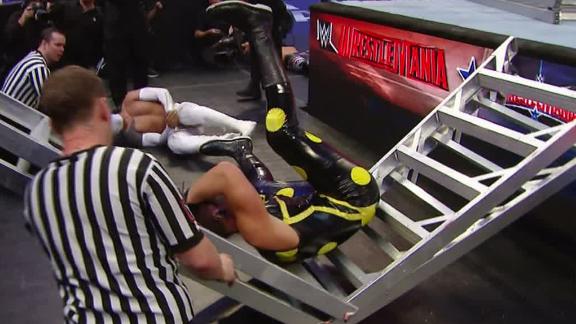 Kevin Owens pushes Sin Cara off the top ladder, sending him on top of Stardust and smashing through a ladder at WrestleMania 32. Watch

In a way, this was a pretty good metaphor for the WrestleMania 32 main event. They had so many weapons, so much potential, but right when they teased the big finish, they tossed it aside.

Monday night on Raw, WWE revisited a number of the WrestleMania verdicts and retconned the endings. Despite losing to The Undertaker, Shane McMahon was put in charge for the night. Ryder dropped the IC belt. The New Day got the win back against The League of Nations. They spotlighted guys like Owens and AJ Styles, who didn't get the opportunities many thought they deserved at the big show.

And most notable of all, Reigns was officially teasing villainy. It's unclear whether they had second thoughts or if they were just playing up to the notoriously vocal post-'Mania crowd.