Editor's note: On Saturday, June 11 at 9 p.m. ET, ABC will broadcast the premiere of "O.J.: Made in America," a five-part documentary chronicling the life of one of America's most polarizing figures, O.J. Simpson. ESPN.com sat down with the producer and director of the film, Ezra Edelman, to talk about the motivations and themes behind this documentary.

So much has been said and written about Orenthal James Simpson. What are you hoping to add to the conversation with this five-part documentary? 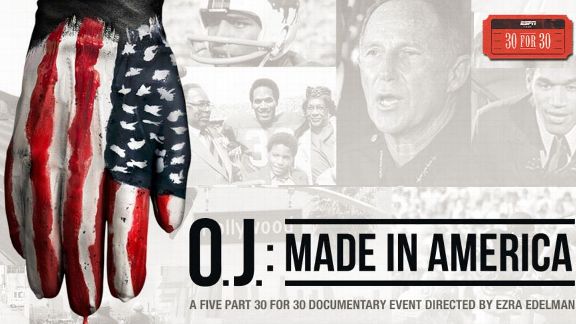 The award-winning and diverse voices of ESPN.com continue the conversation on the critically acclaimed "O.J.: Made In America."

Ezra Edelman: I'm just trying to tell a good story about a subject that a lot of people think they knew everything about. And hopefully we found a way to add some texture and nuance to that conversation.

What drew you to it?

Ezra Edelman: I was asked. [Laughs] I didn't wake up one day and say, I have to tell O.J.'s story. But what drew me to it wasn't what people have focused on over the last 20 years -- meaning, the question of innocence or guilt, nor the spectacle of the trial. I was more interested in the history that led up to that point in time in 1994, which would help explain what exactly went into making the trial as fascinating as it was.

To fully understand what would come later, you take the viewer back to the 1960s and the start of his collegiate career at USC. What led you to that decision, as a filmmaker?

Edelman: We're fundamentally tracking O.J.'s rise as an athlete and, more importantly, as a celebrity, so you have to understand what USC is as a setting, institutionally, in Los Angeles. It's a place that was very white and conservative. A lot of the students, especially in the late '60s, were very well off. So for O.J., a black kid who grew up in public housing in San Francisco, to have arrived at USC when he did, and to have been acculturated there at that time, is very fundamental to understanding where he ended up. The people in his world in L.A. were very different from the thousands, if not hundreds of thousands of people who invested in him during the trial. You also have to remember that USC, geographically, is located next door to an area that exploded in violence a year and a half before he got there with the Watts riots. That gave me the beginning point to tell a story on two different tracks that were going to intersect again in 1994.

In Part 1, societal issues are creeping into sports. We're seeing the emergence of elite athletes as men of principle, finding a voice in the civil rights movement. How did O.J. differ from other prominent black athletes of his time?

Edelman: O.J. was primarily interested in O.J.. His rise to fame in the late '60s coincided with the period where black athletes were more outspoken and political than in any era. You're talking about the generation of black athletes that came about after Jackie Robinson. Athletes after that were just happy to find a place in sports. But when you got to the mid-'60s, you had athletes like Jim Brown and Muhammad Ali, who were very outspoken on the issues of race and civil rights. There was an expectation that black athletes were going to speak up, but O.J. was a different cat.

And again, that's what's so important about him being at USC, which was not a political place. It was quite the opposite. He existed in a bubble. So when Harry Edwards approached him about being involved in the Olympic Project for Human Rights, O.J.'s response was, famously, "I'm not black -- I'm O.J." O.J. had ambitions to be famous, rich and liked by everyone, and I think he understood that being political and militant as a black athlete was not a way to engender universal love.

At the same time, we see O.J. as a generous man who made it a point to share the spotlight with his teammates. How do you reconcile that with the man we've come to know?

Edelman: Human beings are complicated. O.J. is a testament to that. Just because he stood on trial accused of murder doesn't mean he can't be a generous person. A person who shared the spotlight with his teammates after he broke the NFL rushing yards record in 1973 is the same person who was on trial for murder 21 years later. He's a complex guy, and I think it's important for people to engage with who O.J. was, and not try to reduce him to a caricature.

We meet Al Cowlings in Part 1. A.C. was O.J.'s best friend and teammate. And O.J. steals his girlfriend. And yet A.C. remains loyal, all the way to the end. Why? What's O.J.'s trick?

Edelman: I'm sometimes loath to comment on someone's motivations, but we know blood is thicker than water, and in essence Al Cowlings was O.J.'s brother. He grew up with him. You can make an argument, based on A.C.'s trajectory of being beside O.J. throughout his professional career and later in L.A., that O.J. in many ways was his meal ticket. Having said that, A.C. was a loyal friend. I think I heard Jalen Rose say on his ESPN Radio show the other day, "Al Cowlings is his 'ride or die.'" Hopefully, that's one more thing that will be thought-provoking -- why would somebody stick by O.J. for so long? These are kind of unexplainable things. Is it because O.J. was charming? Or did he make amends in a way that we couldn't possibly know? Or is it the fact that being close to O.J. was going to benefit A.C. throughout his life? Who knows?

Coming Tuesday: Part 2 of our conversation with Ezra Edelman.